How well do you know your U.S. UFO lore? The incident referred to as the “only historically documented UFO sighting in the United States” occurred in what state? If you said “New Mexico,” you’re close … but only because the International UFO Museum Research Center in Roswell, New Mexico, donated funds to pay for a memorial to the incident which occurred on September 1st, 1969, in Sheffield, Massachusetts. There’s a UFO memorial in Sheffield, Massachusetts? Yes, but you’d better get there in a hurry because the local government wants it moved. Again. What do the aliens have to say about this?

"This Governor's Citation [is] in recognition of the off-world incident on Sept. 1st, 1969, which engaged the Reed Family, which has been established."

That’s part of the inscription on a 6-foot tall, 5,000-pound concrete memorial located at the end of the Old Covered Bridge, a replica (the original burned down in 1994) of the one Thom Reed, his mother, grandmother and brother crossed over on that hot night and into … something. Reed was 9 at the time and has become the official re-teller of the tale. He told it once again recently on the website All of New England.

“We then continued toward the Sheffield Covered Bridge. It was dark and there was a glow emitting up through the planks as we entered the bridge. As we exited the bridge my grandmother turned and talked to me as I had given my brother candy and she thought he might choke on it. She remarked on the luminescence that still remained behind us. At that point the craft was still beneath the riverbank.”

Reed says the craft rose up and suddenly engulfed the car in a reddish amber light.

“The next thing I remember is being in a building or a large area that resembled an airplane hangar with long fluorescent tubes, providing very low lights, equally spaced out on the top corner walls. My left arm was grabbed by a small bald hairless person. He pushed me out of the room and down a hallway. At that point I remember seeing two large ant-like insects there. They were four and a half feet tall with stick bamboo like legs. Their heads were orangey gold and shaped like a football. “

The next thing Reed says he remembers is being back in the car. Only his grandmother was conscious and she drove the car back. What they thought was 15 minutes had actually been a couple of hours. They reported the incident to the police the next day and found that at least 20 others had also reported seeing a UFO. A local radio station said they received 40 calls from witnesses. At some point, Reed was said to have taken a lie detector test and got a 99.1 truth rating.

Based on that, the Great Barrington Historical Society declared the UFO sighting “historically significant and true” and money was raised, including a donation from the International UFO Museum Research Center in Roswell which has a wall dedicated to the incident, to create and install the monument at one end of the replica of the bridge.  After a graffiti incident, the stone was moved a few weeks later when officials discovered it was on town property. The new location, 30 feet away on the Pine Island Farm, was eventually updated with two benches and lights and it became the Thom Reed UFO Monument Park. (Numerous photos of the monument and Thom Reed can be seen at the park website.)

"It's kind of on town property and no one decided it could go there. The town has bylaws and if we let one place put something up then why can't someone else? I don't want that to happen."

Town Administrator Rhonda LaBombard told the Berkshire Eagle that a recent land survey found that the little park with the big monument is still on a town right-of-way easement and must be moved again or the town will remove it in May. Reed himself is puzzled because LaBombard chose the site herself and farmer Louis Aragi thought it was on his private land. 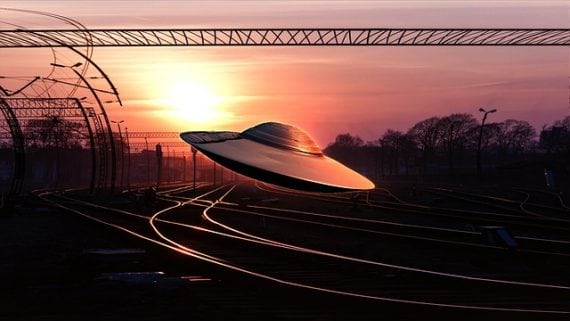 What’s the problem? Despite the fact that it’s the “only historically documented UFO sighting in the United States” and the subject of six documentaries and numerous TV UFO investigation shows, the little park is probably not the tourist draw Sheffield had hoped it would be, and city officials may be concerned about future vandalism or other problems they don’t want responsibility for.

This couldn’t come at a worse time for Thom Reed. He’s currently working on three novellas based on the sighting, a possible six segment mini-series, and will be speaking at the International UFO Museum’s UFO Festival July 6- 8, 2018, where he’ll discuss the incident and probably his two other UFO encounters.

Maybe while he’s there he should pass the hat for the memorial.

The Creepy Case of the Silent Twins