Dawn of the Zombie Raccoons

Sometimes it seems that truth can be almost as strange as fiction, and there are often news stories that read like something straight out of a horror film. A weird piece of strange animal news that has been making the rounds quite recently is the reports of a rural Ohio town being seemingly invaded by what are being called “zombie raccoons.”

The stories began to emerge in late March of 2018, when the residents of the mostly peaceful town of Youngstown, Ohio, in the United States were to encounter a very unique terror. Here police began to be flooded with calls from scared locals claiming that there were raccoons emerging from the surrounds that displayed remarkably odd behavior, such as walking about on their hind-legs while continually baring their teeth and showing extremely bold, fearless behavior not typical of the area’s raccoons, leading to the common description of “zombie-like,” as well as tending to suddenly crumple into a heap in a sort of dazed trance. Adding to the oddness was that these "zombie raccoons" were shambling about frightening people in the middle of the day, which is rare for the nocturnal creatures.

According to the local news station WKBN-TV there were 14 such reports within the span of a few weeks, with one of these being that of 72-year-old Robert Coggeshall, who was playing outside with his dogs at around noon when he had his own zombie encounter. It was immediately odd to see a raccoon out at that time of day, and things got odder still when he tried to chase it off with a stick. Instead of fleeing, the fearless raccoon allegedly reared up on its hind legs and walked towards him while baring its sharp teeth. At one point it suddenly fell to the ground in a “comatose state,” before getting back up to renew its advance. Coggeshall says that he got his dogs inside and that the rather vicious raccoon actually came right up to the door’s glass and pressed up against it to peer inside while snarling. He would tell the Washington Post:

He would stand up on his hind legs, which I’ve never seen a raccoon do before, and he would show his teeth and then he would fall over backward and go into almost a comatose condition. He’d come out of it, walk around, and then he’d do the same thing again. It was kind of startling. And it kept coming back to the house. It was at my door about two or three times. 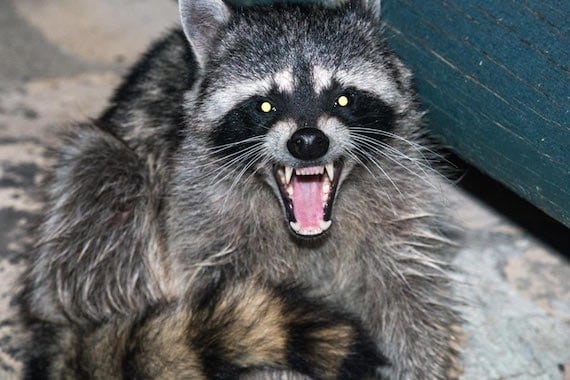 It was to be a common report for the over a dozen people who called in with similar reports, and one of the more baffling aspects was that the raccoons were not scared of loud noises or people in any way. Police responding to the calls also were able to catch 14 of the culprits, which were euthanized, and were also puzzled by the animal’s unusual behavior. Baffled animal experts weren’t quite sure what to make of these reports at first, and it was widely speculated that it may have been caused by rabies.

It has since been theorized that these raccoons may have been suffering from a viral disease called distemper, which can also affect dogs, skunks, foxes, coyotes, and other animals. Animals suffering from distemper can display bizarre behavior such as nocturnal creatures wandering around during the days, strange mannerisms, listlessness, inhibited coordination, and a loss of fear or reaction to outside stimuli, along with various physical symptoms such as coughing, head tilt, muscle twitches, brain damage, seizures, and paralysis. So zombies, basically. Fortunately for the residents of Youngstown, distemper is not transmissible to humans, so we will not have a full zombie outbreak on our hands. For now.