Homeowners should know that even a small crack in the ceiling, wall or floor is a sign that something bad is happening and shouldn’t be ignored. Residents of Kenya and African countries in the same longitude should have felt the same way when a crack formed across the Mai Mahiu-Narok road near Nairobi, but they didn’t seem too concerned … until geologists pointed out that the crack formed in the aptly-named Rift Valley where two active tectonic plates meet and scrape against each other for 3,000 km (1864 miles). Talk about a bad sign! How much plaster do you need to fill a 3,000 km crack?

The Kenyan news source Standard Digital reported that the first crack appeared on March 14th as rain washed away a one kilometer stretch of the road and flash floods killed at least one person. While rain and floods are common in the area, this relatively little crack was not. It was a sign that something was happening underneath it in Suswa, a shield volcano made by lava that flows in a river out of a volcano rather than from an eruption. By March 20th, the crack was 50 feet (15.5 km) wide, 50 feet deep and a number of miles long … and getting longer and wider by the day. 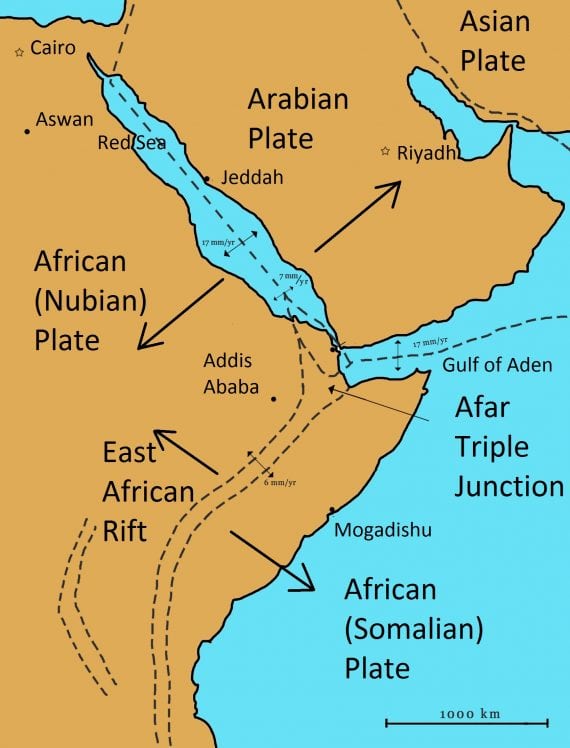 Worried yet? This is obviously more than a road problem that can be fixed by the local pothole crews working overtime. Geologists are looking closely at the movements of the African plate, which covers most of the continent, and the Somali plate, a minor plate which covers about half of the East coast of Africa, from the Gulf of Aden, between Somalia and Yemen, south to Durban, South Africa. Where the plates meet is called the East African Rift, and the Rift Valley where the crack opened is part of the eastern branch of the East African Rift known as the Gregory Rift (named for British geologist John Walter Gregory who explored the rift in 1892-93 and 1919).

Fossils of early hominins have been discovered in the Gregory Rift, but what concerns geologists at the moment is that the rift is on the Kenyan Dome, a geographic uprising formed by the interactions of the African, Somalian and Arabian plates – the Arabian covers the Arabian peninsula and has been moving northward to mash into the Eurasian Plate. That pulling-away is also impacting the East African Rift. The entire collection of rifts are considered to be active and moving because the magma plume beneath them is hotter than the average plume. 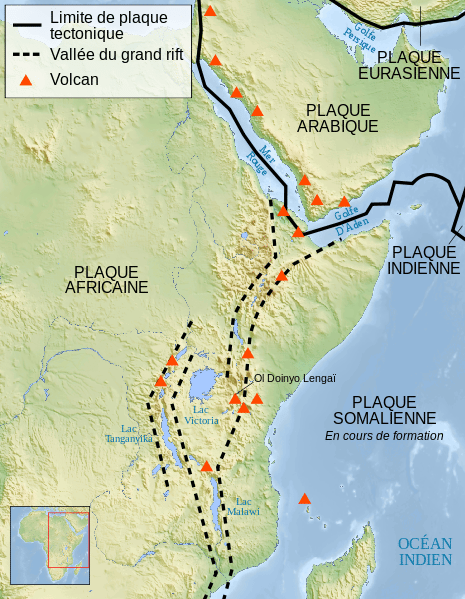 Now are you worried? The Kenyan media source Daily Nation interviewed geologist David Ahede, who said the Somali plate is moving away from the African plate at a rate of 2.5 centimeters (1 inch) per year – a big gap in geological terms. He blames it all on the Suswa volcano, which is also active. All of that movement of plates away from each other causes earthquakes, which is what ultimately caused the Mai Mahiu-Narok road crack and its continual spreading north and south. This is the second time in five years that a crack has opened up at the same location in the Rift Valley.

Is the east coast of Africa going to break off into the Indian Ocean? Yes … eventually. Residents of Rift Valley have time to sell their homes before the property values – like their countries – plummet. The split is expected to be complete around 50 million years from now. However, the seismic and plate tectonic activity is expected to increase on a smaller scale, causing major cracks that can cause major accidents, landslides, flooding and other natural disasters.

For what it will look like when all of the plates break, think giant bull in continent-sized china cabinet.