For archeologists, a sign that ancient humans had domesticated an animal species is to find remains of the animals buried with humans. For dogs, the earliest confirmed side-by-side burials were found in Bonn-Oberkassel, Germany, and date back about 14,700 years. In North America, the accepted earliest appearance of domesticated dogs was found in Texas, where bones of dogs eaten by humans (not exactly man’s best friend yet) date back 9,300 years. Those bones have now been replaced by the remains of three dogs that date back 10,000 years.

The new discovery was presented this month at the annual meeting of the Society for American Archaeology by zooarchaeologist Angela Perri, a researcher at Germany’s Max Planck Institute for Evolutionary Anthropology. Evidence of early dogs in North America has been scant, and the bones of these three dogs indicate they died of natural causes and were carefully buried in an unusual place.

“Here, we present the identification and direct radiocarbon dating of an isolated dog burial from Stilwell II, an Early Archaic site in the Lower Illinois River Valley. We also present new direct radiocarbon dates for two dogs from the nearby Archaic Koster site. These dates confirm that the Stilwell II and Koster dogs represent the earliest directly-dated evidence for domesticated dogs in the Americas and the oldest intentional burials of individual dogs known in the worldwide archaeological record.”

Illinois? Not Alaska? Not British Columbia or the U.S. Pacific Northwest? No ancient dog remains have been found ceremoniously buried in those areas despite the fact that the first humans migrating to North America from Eurasia settled in and traveled through those areas before reaching Illinois and Texas centuries later. No dog sleds? Perri speculates in Science News (which also has images of the bones) that there was a second mass Eurasian migration about 11,500 years ago that followed an ice-free path to the northern Great Plains and those are the people who first brought the dogs.

Another mystery is the breed of these particular canines. Perri says the jaws and teeth of the two Stillwell dogs partly resemble modern wolves, while the Koster dog, found 30 km (18 miles) away, was more like a coyote. However, Kelsey Witt Dillon, a cell biologist from the University of California, Merced, reported at the same meeting that a study of mitochondrial canine DNA from more than 20 North American sites dating from 10,000 to 800 years ago shows that these dogs come from a single lineage and the coyote and wolf resemblances suggests inbreeding.

One final mystery … the genetic blueprint of these early North America dogs is largely gone from modern ones. Dillon proposes that the European breeds brought when humans began sailing across the Atlantic to North America quickly dominated the older dogs and it’s their DNA that is predominant in today’s dogs. 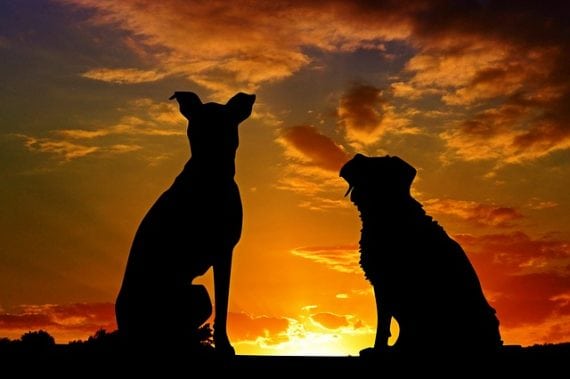 It’s hard to believe humans didn’t bring man’s best friend with them when they crossed the Bering land bridge. It’s even more difficult to imagine them plowing through the snow and over the ice without dog sleds. All of this means that there’s a lot of burial grounds to be examined between Illinois and Alaska for the first North American dogs.