The Dallas Morning News has been around long enough to report on a truly interesting UFO story from 1897 and is still here to follow up on the most current news about the incident. In Aurora, Texas, there was – until 1972 – a stone marking the grave of what many locals claimed was the body of a Martian pilot whose spacecraft crashed into a windmill there on April 17, 1897. The marker was replaced, but that stone was stolen in 2012. A Dallas attorney who recently visited the site and learned of the missing markers is offering a $1,000 no-questions-asked reward for the return of the original simple-yet-unique gravestone. If you’re the person possessing it and are thinking about holding out for more money, he’s also paying for a top investigator to look into the case.

The Aurora UFO incident is special because it not only predates the Roswell UFO incident by 50 years, it also occurred before the Wright brothers first flew their flying machine in 1903. According to the Dallas Morning News, the alleged UFO hit a windmill on the property of Judge J.S. Proctor in Aurora, which is about 55 miles west of Dallas and 27 miles northwest of Fort Worth. The pilot was allegedly examined by an Army officer from Fort Worth and declared to be dead and “not of this world.” The body was said to have been buried “with Christian rites" in the Aurora Cemetery. The grave was marked with an asymmetrical stone showing a drawing of a saucer or cigar-shaped spacecraft with three holes on the side. (photos here)

According to later conflicting reports, the wreckage was either dumped in a nearby well or buried with the mysterious body. Those who believe it was in the well point out that the man who bought the property in 1935, Brawley Oates, began using the well again but stopped when he developed arthritis which he believed to have been caused by whatever was in the water. It’s reported that he put a concrete slab and a building over the well.

What exactly happened in Aurora, Texas, on April 17, 1897? Many investigations have been conducted and most point out that there were a number of sightings of a “mystery airship” in 1896 and 1897. While there were no airplanes yet, navigable balloons and dirigible-style airships were flying -- the Luftschiff Zeppelin LZ1 made its first flight in 1900. There’s some thought that the town may have created the report to stimulate tourism to help recover from recent diseases (spotted fever), crop failures (boll weevils) and bad news (railroad line bypassing it). Suspiciously, there doesn’t appear to have been any follow-ups or investigations in the years immediately following the incident.

Later investigations in the 1990’s and 2000’s didn’t find much more. No one has been allowed to exhume the gravesite. MUFON’s metal detectors detected metal, but on a return visit the second grave marker was gone, a pipe was in its place and there were no more metal readings. In 2008, the TV series UFO Hunters was allowed to unseal the well but found nothing unusual. It also detected no metal at the gravesite. 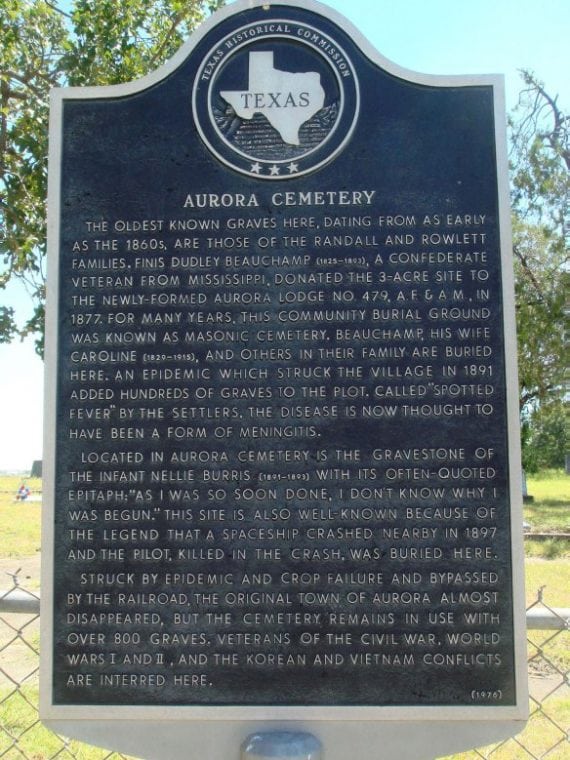 Despite no evidence, no grave marker and conflicting stories, Aurora still promotes the incident with an annual festival, information on the city’s website and a sign at the cemetery. Those are what brought Dallas civil defense attorney Stratton Horres there recently. He apparently has more than a passing interest in this case. In addition to hiring a top investigator to help locate the gravestone, he plans to search for who drew the markings on it and where the stone came from. If the original turns up, he will help Aurora keep it from getting stolen again.

Is Stratton Horres just a guy with an interest in UFOs, aliens and the Aurora UFO incident … or is he stocking up on goodwill points in the event of an alien invasion?