If you had “God particle” in the “What will cause the end of the universe?” pool, you stand a good chance of winning … but a poor chance of collecting your winnings. According to new research, scientists believe the universe will end when a tiny bubble begins expanding at the speed of light and devours everything it meets. Even scarier, the bubble will form inside the Higgs field. If that name sounds familiar, it’s the field of energy that creates the Higgs boson particle – better known as the “God particle” – which was discovered at CERN’s Large Hadron Collider in 2012. If the mass of Higgs boson is altered, it could become the particle in the Higgs field that creates the bubble that eats the universe.

Have you guessed the bad news yet?

"At some point you will create one of these bubbles. It will be very unpleasant." 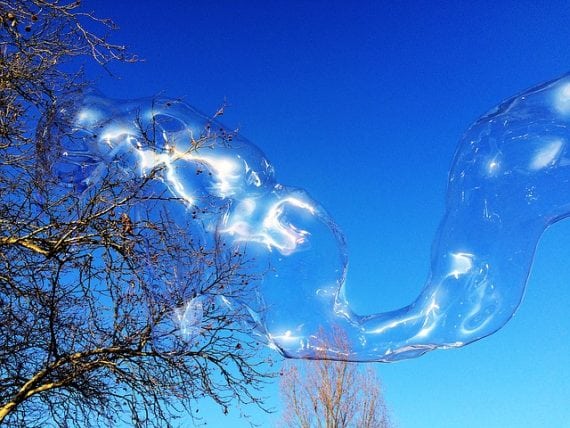 Harvard physicist Anders Andreassen is the lead author of the study, published recently in the journal Physical Review D, who links the bubble to Higgs boson. The particle’s mass is currently 125 gigaelectronvolts, but it could change. When it does, the end result is that ever-expanding, universe-killing bubble-to-end-all-bubbles. It’s a good thing that hasn’t happened yet, right? Right?

“It's possible that a bubble has already formed and is hurtling toward us at the speed of light right now.”

Live Science reports that Andreassen gave that depressing observation in an interview. Hopefully, we’ll at least be able to see it coming and make preparations for our demise, right? Right?

“It is sobering to envision this bubble, with its wall of negative energy, barreling towards us at the speed of light. We will never see it coming.”

Is there any good news or should we storm CERN and shut it down?

Yes, unless you’re one of those physicists who believes the universe will end in a battle between matter and dark matter, which could happen at any time.

A Case For Man-Made UFOs Or Not?