Everyone knows there are plenty of skeletons inhabiting closets in New York City and the state capital of Albany, but at least they manage to stay hidden until their owners run for office or get in trouble after being elected. That’s not the case on New York’s Hart Island, a mile-long isle in the Bronx that has served since the Civil War as a public (and sometimes mass) graveyard for one million unclaimed bodies … including the scores that have been recently rising out of their graves. What’s happening on this “The Island of The Dead”?

"Skeletal remains are literally just coming out of the earth."

New York artist Melinda Hunt, who founded the Hart Island Project in 1994 to help identify the bodies buried there, recently toured the uninhbited but heavily guarded island by helicopter and reported the horrifying scenes to CBS New York station WCBS-TV.

"They know that it's happening because I learned about it from the correction officers, who referred to this area as 'bones beach'."

“They” are the officials of the New York State Department of Corrections, which has managed, or perhaps mismanaged, the island for decades. How hard is it to manage a cemetery? Perhaps a little slack is in order when it’s the largest public-funded cemetery in the world. Let’s find out. 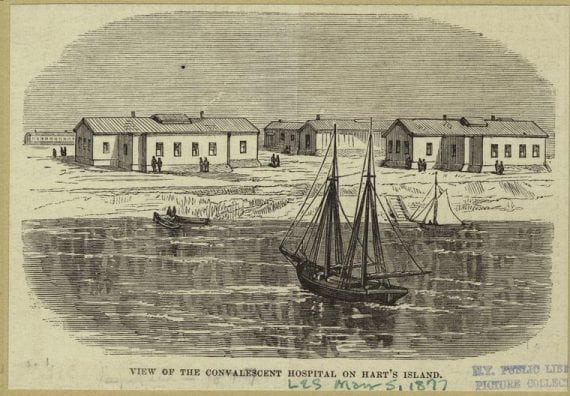 Hart Island’s history is as varied and horrific as the inevitable ghost stories told about it. It was purchased from Native Americans in 1654 by English physician Thomas Pell, who may have heard about the sweetheart deal Dutch colonists got on Manhattan in 1626. In fact, Pell got the Pelham Islands (named for him), the Bronx, Long Island Sound and parts of Westchester County for a supply of Jamaican Rum. The island may have gotten its name from its heart shape or from an English word for ‘stag’ due to its population of deer, which made it an early hunting area.

Not much is known about Hart Island until 1863 when it became a POW camp for more than 3,000 captured Confederate soldiers. Over 230 died in prison and were buried there. After the war, it became a cemetery for indigent veterans. In the 1870s, Hart Island became a quarantine facility for victims of yellow fever, then a women’s psychiatric hospital, a tubercularium, a home for delinquent boys, and a missile site during the Cold War. The Department of Correction used the island for a prison up until 1966 and briefly in the 1980s. The first non-veteran was interred there in 1869 and today over one million dead are buried on the island. In addition to adults, the burials include infants, stillborn babies and even dismembered body parts. As deceased are identified by the Hart Island Project, relatives can have their remains disinterred and moved. However, the process is long and trespassing is punishable by up to two years in prison, which ironically would give you more access to the island since Ryker’s Island inmates perform the 1,500 annual burials still conducted today.

Because of the restricted access, detailed ghost stories about Hale Island are scarce. That may change with the revelation of the real horror story of how the remains of the island’s dead treated.

"It's simply wrong that people who are neglected in life, who were marginalized in life in the city, are now getting the same treatment in this burial ground."

“Entire skeletons are sort of falling out of the hill onto the beach, and then they’re washed away with the tide.”

While management is being argued about, the Federal Emergency Management Agency (FEMA) gave the city $13 million to use for repairing the erosion that has caused some of the problems, but those repairs are not scheduled to begin until 2019.

In the meantime, the skeletons will continue to rise on New York’s Island of the Dead.