Some Stonehenge Stones Were Already in Place When Humans Arrived

While the mystery of why Stonehenge was built remains a puzzle, the mystery of why it was built where it’s still somewhat standing may have been solved … and the answer opens up a new mystery. A leading Stonehenge expert and one of the few people to have actually excavated at the site claims that two of its largest stones were placed there millions of years before humans arrived … and their summer solstice alignment with the sun was merely a coincidence. Wait, what?

In an interview with The Times about his research which has just been published in the journal British Archeology, archeologist, journalist and photographer Mike Pitts describes how he came to this radical theory. It starts at the Heel Stone, the largest sarsen (sandstone block) at the site. Located 75 meters (250 feet) from the center of Stonehenge, outside the entrance and close to the highway, it weighs 60 tons and is 4.7 meters (15.4 feet) high, with an additional 1.2 meters (4 feet) underground. The Heel Stone’s significance starts with the fact that it’s the only sarsen at Stonehenge that has not been shaped or dressed – both signs that it would have been carved before being moved to its present location. Its size and shape indicated otherwise to Pitts.

“The assumption used to be that all the sarsens at Stonehenge had come from the Marlborough Downs more than 20 miles away. The idea has since been growing that some may be local and the heel stone came out of that big pit. If you are going to move something that large you would dress it before you move it, to get rid of some of the bulk. That suggests it has not been moved very far. It makes sense that the heel stone has always been more or less where it is now, half-buried.”

The “big pit” Pitts referred to is a six-meter diameter hole he himself discovered while digging near the heel stone in the 1970s. The size makes it too big to have been used for a standing stone, so he thinks it’s where the heel stone was lying before it was lifted out and moved. In fact, Pitts believes the Heel Stone and Stone 16, another odd-shaped stone, are visible remnants of a large number of broken sarsen boulders buried beneath Stonehenge. He also believes that Stone 16 came from a different hole near the center of Stonehenge … and the two stones at that time had something unusual in common.

“The most likely explanation is that it too held a natural sarsen boulder. It’s possible that at the end of the ice age we had two really large visible sarsen boulders, probably the two largest on Salisbury Plain, close together on the midsummer sunrise-midwinter sunset axis.” 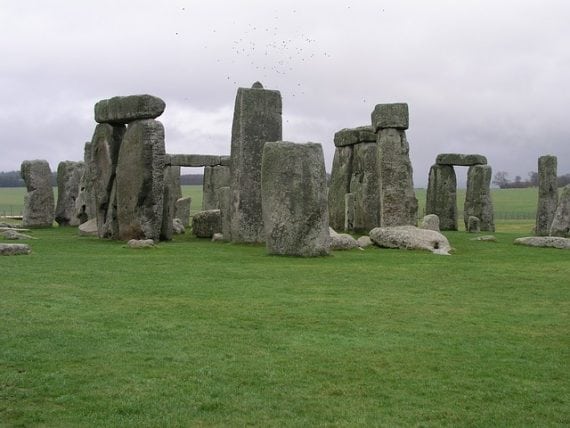 Did that mysterious natural alignment millions of years ago of two huge boulders with the Sun draw people to this site over 5,000 years ago and inspire them to drag more massive stones from 20 mile away to build their own massive monument to … something?

As Egyptians looking at the pyramids might say … stranger things have happened.