Strange Shadows in Space May Be Wormholes

If it’s true that wormholes exist and that it’s only a matter of time before we find one or more of these tunnels through spacetime, that time may have just gotten a little shorter. A physicist in India claims that wormholes should cast a shadow just like the ones black holes cast and, once we get better at finding those, the same technique will help locate the similar but slightly distorted shadows of a wormhole. Are you ready for faster-than-light travel?

In a paper submitted to the Physical Review D journal arXiv  but not yet peer-reviewed, Tata Institute of Fundamental Research physicist Rajibul Shaikh first looks at black holes, which we can’t see directly yet, and their shadows, which are actually dark spots made by matter that’s being pulled into the black hole passing over the bright event horizon – the light that hasn’t yet been sucked into the black hole’s darkness. Astrophysicists around the world have teamed up to build a network of individual radio dishes that will work together as a giant Event Horizon Telescope (EHT) that can, for the first time, pick up an image of a black hole. A picture of the black hole at the center of the Milky Way was taken in April 2017 and they’re currently analyzing the data.

Shaikh proposes that wormholes cast a similar yet distinguishable shadow.

While prior models have calculated the shadow of a wormhole before, Shaikh adds data from the throat or connecting center tunnel of a particle type of fast-rotating wormhole. According to his calculations, the shadow of this type of wormhole would be distorted in comparison to that of a black hole, which would be a well-formed disc.

“In other words, the results obtained here indicate that, through the observations of their shadows, a wormhole having reasonable spin, can be distinguished from a black hole.”

Should we start the engine on the starship, Dr. Shaikh?

“However, our conclusions are largely based on the types of wormholes we have chosen to
work with. It will be interesting to see whether or to what extent the conclusions drawn here carry over to a broader class of rotating wormholes.” 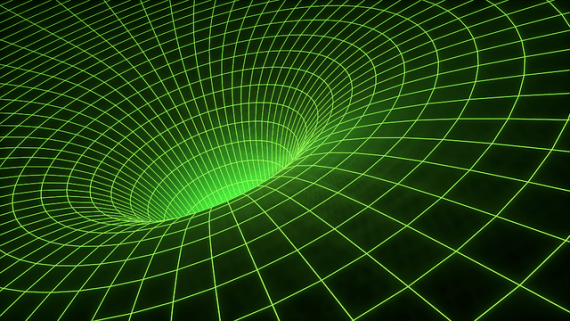 It’s still all theoretical and based on massive, fast-rotating wormholes. Wormholes are predicted to exist in microscopic sizes and it’s also just a theory that the expansion of the universe may have stretched some wormholes to a size where they could be detected by the same means black holes might someday be detected. However, even skeptical physicists aren’t saying no … yet.

In the meantime, we can all agree that “Shadows of a Wormhole” would be a great title for a progressive rock song. Yes?