The Color of Antimatter and the Origin of the Physical Universe

Antimatter might be a mainstay of many science fiction tales, but real-world scientists are finally getting close to actually catching a glimpse of this mysterious building block of the universe. Antimatter is an elusive type of matter which has the exact same structures as normal matter, but with opposite charges and properties. That makes antimatter the ‘opposite’ of normal matter, the bizarro world version of all of the ‘stuff’ which exists in the universe which has the terrifying ability to instantly annihilate normal matter. One theory proposed by Richard Feynman even claims that antimatter particles are just regular particles traveling backwards in time. It’s pretty mind-bending stuff. 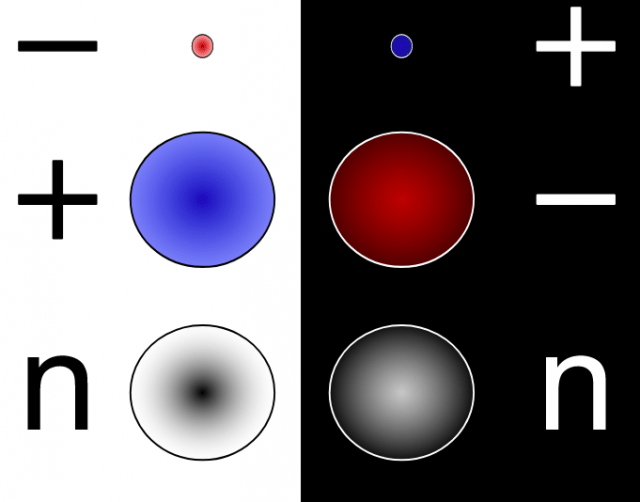 Last year, physicists at CERN were able to observe a particle of antihydrogen last year in what was the first real glimpse we’ve had at antimatter. Building on that discovery, scientists at the University of Manchester have published a study in Nature which details the first ever observation of the physical structure and even color of antimatter. Is it brown? Rainbow? Octarine?

Unfortunately for the color curators at Crayola, we’re unlikely to see an “Antimatter” colored crayon any time soon. That’s because in this study, color doesn’t exactly refer to any particular visible wavelength of light, but rather the various frequencies of light the antimatter atoms emit or absorb as they shift from a lower energy state to a higher one, a technique known as spectroscopy, or anti-atom spectroscopy in this case.

Still, in a University of Manchester press release, Dr. William Bertsche says that getting to observe the spectroscopic properties of antimatter could begin answering some of the big questions of physics:

A long-standing challenge for physicists has been to explain why matter, rather than antimatter, survived the Big Bang. Current theories suggest that our world should be equal parts matter and antimatter. Luckily for us, this is not the case because life as we know it would not be possible in world with that much antimatter. However, we do not understand why this is the case. The colour of antihydrogen may help solve this great mystery because this exotic atom is the antimatter equivalent of the hydrogen atom.

Physicists hope that once the physical properties of antihydrogen are fully understood, we might begin to understand why antimatter seemed to have vanished after the Big Bang and why normal matter didn’t. Such questions might help us understand how and why the physical universe exists in the first place. Here’s the thing I keep coming back to though - do we really want to know? The answers are likely terrifying.