The Mysterious Monster Of the Deep Blue Holes of the Bahamas

Sea monsters come in all shapes and sizes, and have been reported from all corners the globe for centuries. Coming in all flavors, such accounts never cease to amaze and inspire the imagination, and remain a staple of the field of cryptozoology. One very interesting type of sea monster comes to us from the postcard-perfect paradise of the Bahamas, in the Caribbean Sea, where something seemingly rather fierce and malevolent has long been reported to prowl these blue waters.

Among all of the islands in the archipelago of the Bahamas the largest is the island of Andros, which consists of an area greater than all the rest of the islands combined. Here is a land of sun-kissed white sand beaches, idyllic small islets and cays, sprawling mangrove swamps, clear azure waters, majestic coral reefs, and some of the greatest biodiversity in the region, and tourists flock here from all over the world to see it all. Andros is also home of the most famous of what are called “Blue Holes,” a phenomenon in which deep sinkholes form in the carbonate bedrock and descend down into the clear depths.

These blue holes can dive down into vast underground submerged cave systems that can meander down to hundreds of meters and stretch on and fan out for miles, with much of this often virtually unexplored. They are typically visually stunning, with their striking deep blue hues contrasting starkly with the shallower water around them, and they are typically havens for divers. Down in these depths can also be found surreal scenes of animal remains and fossils, perfectly preserved in their watery graves by the salty, oxygen free waters and slow water exchanges at the bottom of these pits that conspire together to prevent decomposition.

Although blue holes are found in many places throughout the world they are particularly common in the Bahamas, with the second deepest one in the world, the 202 metres (663 ft) deep Dean's Blue Hole located at the archipelago’s Long Island. By far the most well-known blue holes among these islands are myriad blue holes of Andros. The island sports an estimated 200 of the holes on land and around 50 along the coast, which draw a large number of tourists looking to dive within the often perilous and very dangerous underwater caves. The blue holes can pose many dangers for divers, such as disorientation, tight passageways, and sudden currents, but if island legends and some mysterious reports are to be believed there are also possibly aggressive sea monsters prowling these caves to be wary of as well.

Locals of the Bahamas have long spoken of a mysterious and terrifying marine creature they refer to as the Lusca, which is traditionally described as possessing the general body shape and gaping, tooth-filled mouth of a shark, and an array of tentacles more like an octopus, as well as being staggeringly massive, sometimes up to 75 to 200-feet in length. Although this is the standard depiction of them in local lore, there are some variations, such as that it can change color like a chameleon, and that it looks more like a giant squid-eel hybrid, a reptilian dragon-like beast, or that it is simply a vast octopus of some kind. Whatever it may be one thing that is always the same and agreed upon with these tales is that the Lusca has formidable tentacles and is most certainly predatory and quite voracious. 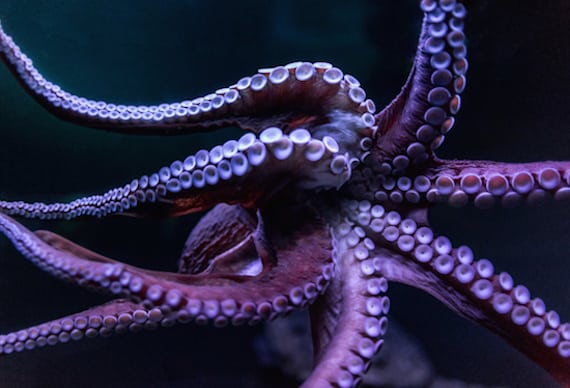 The Bahamas, and in particular Andros, has countless stories of the Lusca running amok in these waters, where they are said to favor the secluded caves of blue holes during the day and to come out at night to feed. Numerous fishermen have claimed to have seen the monsters, and it is often claimed that whole boats have been yanked down below the surface in the vicinity of the blue holes. The Lusca is often blamed on divers who have vanished or died in the blue holes, with some accounts even speaking of bodies or survivors of attacks demonstrating abnormally large sucker marks upon the flesh. Some of the more dramatic tales even say that even the shoreline is not necessarily safe, with people on the beach sometimes snatched and dragged to the caves if they venture too close to the water.

While it may all sound like mere spooky local lore, witnesses typically swear by what they have seen, and sightings and encounters have continued on into very recent times. In 2005 an underwater diver in one of the blue holes claimed that he was attacked by an enormous octopus he estimated as being around 50 feet in diameter, which reportedly actually stole his camera before retreating into a murky cave. Yet another diver claimed to have seen a nurse shark get grabbed by a tentacle as thick as a telephone pole and sucked into a cave. There was also a recent report of a fishing boat whose crew noticed something yanking their buoys completely underwater, a feat which would take a phenomenal amount of strength. One of the buoys was still attached to the boat, and the entire vessel was apparently actually dragged through the water by the mysterious force for some time. Sonar on the boat allegedly showed “a large, pyramid-shaped creature,” and traps attached to buoys that were retrieved possessed damage as if they had been mauled and twisted as if by some huge, angry animal. 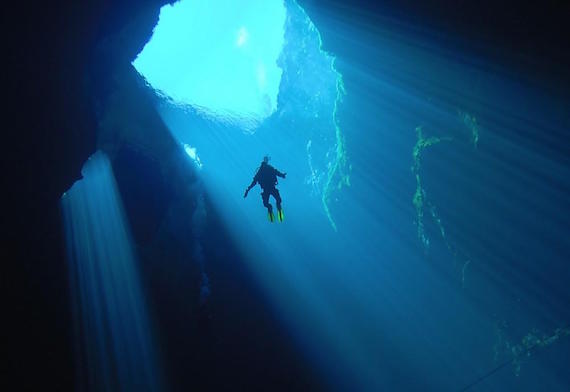 More well-known than these are the various expeditions launched by a few famous TV programs. Perhaps the most dramatic of these was a trip made by the show Destination Truth. During this harrowing expedition, the crew allegedly picked up anomalous sonar readings of something enormous moving and crawling about which they had at first taken to be a part of a cave wall. One of the divers they had put into the water also saw the strange thing, saying that something gigantic moved through the water in a flurried cloud of bubbles and silt into a tunnel, and crew on the boat were so concerned that something so large and potentially dangerous was in there with him that they pulled him out and even turned off the lights on their boat to avoid attracting the beast. Footage of what might be the Lusca was also taken at the time, which seems to show perhaps a tentacle, but it is blurry, indistinct, and far from conclusive. The TV show River Monsters also visited the blue holes, and while they did not manage to catch anything particularly  bizarre, host Jeremy Wade speculated that the Lusca was probably some sort of giant octopus. Wade would say of this:

My investigation now centers on whether a giant octopus could potentially catch and consume a person. I’ve seen this animal’s amazing predatory behavior, so I know in principle this is a possibility.

Indeed, the most common theory for what the Lusca could be is that it is an enormous unidentified species of octopus, and there has even been some evidence pointing to this. Parts of the carcass of what is thought to have been an extremely large specimen of an octopus allegedly washed up on the Grand Bahama Island in the Bahamas on January 18, 2011, and appeared to be only the head and mouth of the creature. When the potential size was extrapolated using normal octopuses as a comparison it was estimated that this beast would have been between 20 and 30 feet across. The story was initially reported by G. Noel in the Freeport News, and the size estimate was supported by a Clement Campbell of the Department of Marine Service. Oddly, in July of that same year another octopus carcass measuring 12 feet across was found floating on the surface in the same vicinity. Unfortunately this specimen was merely measured but not retrieved. 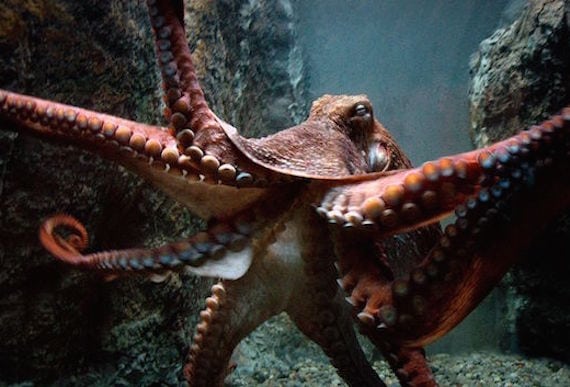 Amazingly enough, in the case of these carcasses there are actually known types of living octopuses that reach sizes approaching these, such as the giant Pacific octopus (Enteroctopus dofleini), the largest known species, which can have an arm span of up to 4.3 m (14 ft), with unconfirmed claims that they can possess massive arm spans all the way up to 30 feet and weigh up to 272 kg (600 lb). Something like this could certainly be misidentified as a mythical beast and be exaggerated as being even larger still, but the problem is that this particular species is native to the coastal North Pacific, nowhere near the Bahamas. However, it still shows that some species of octopus can get to be rather large, so perhaps there is an undiscovered species of similar proportions or even larger than the giant Pacific octopus living in the Caribbean waters of the Bahamas, although nothing like it has ever been found here.

Another more skeptical theory is that the Lusca is based on superstition mixed with the inherit dangers of the blue holes. Divers can most certainly die by any number of reasons while delving into these holes or even vanish off the face of the earth, getting stuck in the submerged tunnels and crevasses to never be seen again, and this could combine with spooky stories to be blamed on the Lusca. There could also be misidentifications of natural phenomena in the area, such as the tidal pulls or whirlpools that blue holes are known for, which could make it appear very much as if someone or even a boat were being pulled underwater by some gigantic monster. How this could explain the sightings from those who are absolutely sure they have seen a many tentacled beast is anyone's guess.

The Lusca is a relatively little-known creature within the world of cryptozoology, but it is no less intriguing than many of the other mystery beasts out there, leaving a lot of questions of its own. What lies down in those deep blue holes? Is it the man-eating shark-octopus monster of Bahamian legend? Is it some sort of outsized unknown giant octopus that calls these spiderwebs of caves home? Is it whirlpools and natural phenomena that have taken on a life of their own to become entrenched in local lore? Or is it just overactive imaginations? Whatever the case may be, this monster in paradise remains an elusive mystery that causes one to look into those alluring azure holes in the ocean in a new way, and wonder if something isn't lurking there coiled in the depths waiting for its next victim.