The Serpo and the Apple

The old saying "to a man with a hammer, everything looks like a nail" can very adequately describe an obsessed UFO student such as yours truly. No matter how unrelated to the topic an article or news story may appear, you never know when you might stumble upon a juicy tidbit of information that could be indirectly related to a given case or report. That's why you always need to leave your Fortean antenna fully raised.

Take for example this 2016 article from Business Insider titled "Apple employees break their vow of secrecy to describe the best — and worst — things about working for Apple." At first glance, one would imagine the piece would be nothing but an inside look at what it is like to work for one of the biggest and most popular tech companies in the world; all the many sacrifices Apple employees are demanded to do, the super-long hours, the secrecy they have to conduct themselves with in order to safeguard their precious industrial secrets --and the severe penalties those who break that silence end up facing…

But then I found this paragraph:

Apple makes grammar and punctuation changes in its internal documents in order to track leaks.

After Business Insider obtained a couple of leaked memos from retail chief Angela Ahrendts, the company began making changes to its internal communications to help it figure out where the leaks came from. It now sends differently worded memos to different sections of the company in hopes of tracking leaks back to the source when those memos are quoted in the media.

This instantly grabbed my attention, because it reminded me of one of the most infamous --and fascinating-- stories in the recent history of UFOlogy: Project Serpo. 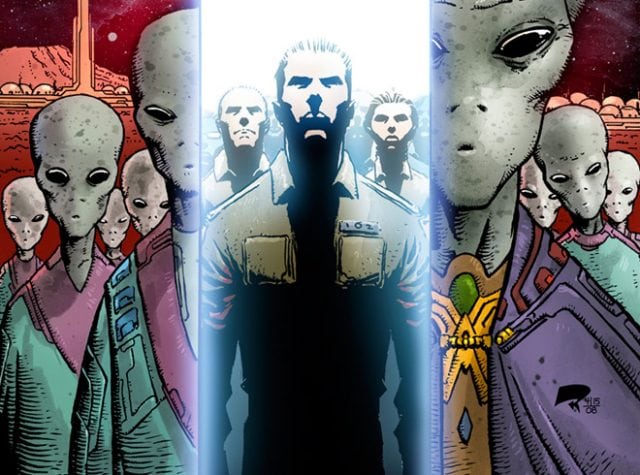 Serpo --for those of you not familiar with the story-- was the name of a supposed exchange program between aliens from Zeta Reticuli and the United States government. It wasn't just every nuts-and-bolts UFO buff's wet dream, but it was also the literal real-life version of Spielberg's Close Encounters of the 3rd Kind: Remember how in the final scenes of the movie we see a crew of men and women carrying a black duffel bag on their shoulder and wearing a weird red jumpsuit with a triangular badge on their arm that said "Mayflower Project"? Despite the lack of clear explanations in the film, eventually the viewer deduces that these men and women volunteered to travel aboard the ET spaceship. In the end, though the aliens pick their own chosen one --the indomitable Roy Neary, who left everything behind (including his whole family) in pursuit of his vision-- and the camera shows him being gently led by a swarm of spindly arms inside the mammoth craft, confidently stepping and fully accepting his fate as envoy to humanity… perhaps never to return. 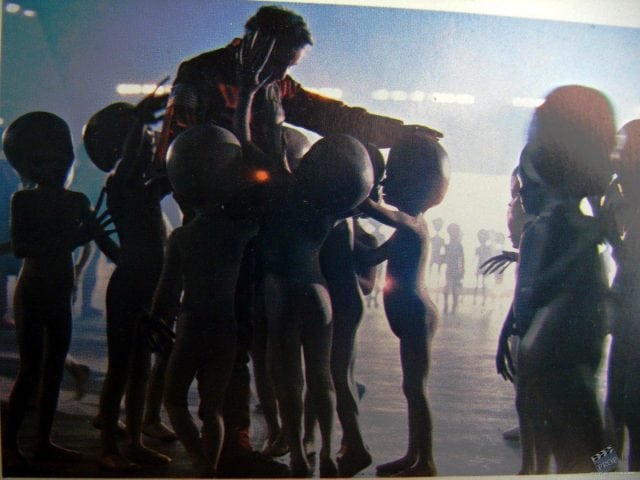 Well, if you believe the anonymous source(s) sending emails to a UFO discussion group administered by former US government employee Victor Martinez in 2005, that is exactly what happened when the sole survivor of the Roswell saucer crash in 1947 was assisted by the US military in re-establishing contact with its homeworld: a planet named Serpo, orbiting the Zeta Reticuli binary star system. The Ebens --acronym given to the ETs in the emails following proper MJ-12 parlance, which were your stereotypical gray aliens-- finally returned to Earth in 1965 to retrieve their comrade, and 12 specially-trained US military personnel went along with them. The group stayed on Serpo until 1978, and only 8 of them (seven men and one woman) returned to Earth, because 2 of them died on the alien world while the rest decided to stay and live among the peaceful Ebens, despite the fact the radiation levels on Serpo were higher than on our planet.

Notice I wrote "if you believe," because there's plenty of reasons why you shouldn't…

For starters, the first red flag one encounters in the Serpo story is that it dutifully ticks almost all the boxes of the modern UFO mythos, which have been gradually added throughout the years: Roswell and the crash at the Corona site --proposed by researcher Stanton Friedman on his homonymous book Crash at Corona; the rumors of survivors to the crash which may have been utilized by the government in order to learn about the extraterrestrials and their intentions; the Reticulan origin of the aliens, firstly speculated from Marjorie Fish's interpretation of Betty Hill's star map; the idea of a secret arrangement or deal between the US military and the aliens, just as the infamous MJ-12 papers posit; the supposed landing of an alien ship at Holloman AFB; the conspiracy theory that Spielberg is a 'Hollywood insider' who's been given the task to disseminate bits and pieces of the truth through his movies, in order to acclimatize the public (it's not that Serpo borrowed its imagery from Close Encounters, it's the other way around!); and lastly the concept of a secret space program, although in this case the humans are mere 'tourists' piggybacking a ride to the alien homeworld. The only 'classical' element missing in the Serpo narrative are alien abductions, which was probably meant to please the hardcore 'nuts-and-bolts' crowd among UFO circles, who were always annoyed by the rude disruption caused by the stories published by Hopkins and Jacobs in the first place in the late 80's and early 90's. 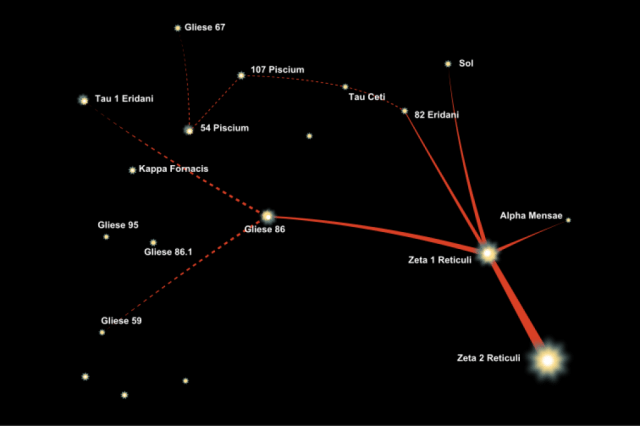 There's also the all-too convenient element that everybody directly involved is dead --according to the anonymous sources, all the crewmembers who returned to Earth have since died due to the radiation they were exposed to-- so there's no-one who could personally confirm or deny the story, thus no chance of someone being exposed for making up outlandish fabrications (*cough* Basiago *cough*).

What's interesting about the Serpo story is that it does have a certain whiff of plausibility, if you adhere to a certain narrative you seek to confirm --in this case, the extraterrestrial nature of the UFO mystery. Which is precisely why you should be wary of someone who is all too willing to tell you EXACTLY what you want to hear (TTS/AAS anyone?). Like I mentioned above, almost all the elements surrounding Serpo were already present in the contemporary UFO lore, and the illusion of confirmation can easily be engineered in retrospect, because hindsight is always 20/20.

Indeed, there's been quite a number of researchers and UFO aficionados who have refused to bite this slithering bait (to his credit, Michael Salla was among those who were skeptic of the story) and have pointed out to a number of inconsistencies in the story handed down to Martinez by his anonymous sources --the scientific data about the alien home planet and its binary star system as depicted in the emails, didn't pass the smell test when scrutinized by actual astronomers.

But perhaps the hottest red herring in the Serpo controversy was the involvement of one Richard Doty in it. Doty, for those of you still studying for your UFOlogy 101 exam, is a former AFOSI agent directly involved in some of the shadiest passages in the annals of this field; Greg Bishop's Project Beta and Mark Pilkington's documentary Mirage Men are indispensable in order to fully grasp the extent of Doty's influence in the seeding of disinformation among the UFO research community, and the public at large. 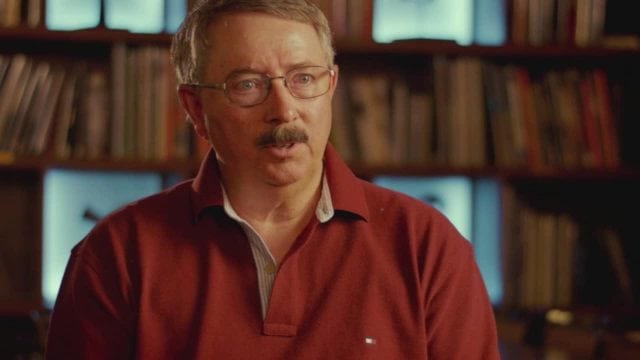 All of this combined should raise enough alarms to conclude Project Serpo was either a flat-out hoax, or perhaps a disinformation campaign carried out at the behest of one or two intelligence organizations.

Which brings us to the Business Insider article and Apple's practice to change the grammar and punctuation of their memos in order to track leaks, and its connection to the anonymous emails received by Victor Martinez. Greg Bishop has pointed out on several occasions on his podcast Radio Misterioso how the Serpo letters contained several typos and basic spelling errors which initially Martinez tried to correct before posting them on his UFO discussion group, and later on the Serpo website managed by UFO researcher Bill Ryan (.e.g. 'hostel' instead of 'hostile'). Martinez had once been a teacher so perhaps he couldn't help himself when dealing with these apparent transcript mistakes in order to make them more presentable, until 'Anonymous' ordered him to stop changing the text of the e-mails and publish them exactly as he had received them.

To Greg, who is quite familiar with the tactics utilized by intelligence operatives, this was clear indication that the typos were not mistakes, but deliberately planted into the released texts in order to track who was talking to who about Serpo.

When I recently mentioned this connection between Apple and Serpo's anonymous source on the Radio Misterioso Facebook page, UFO scholar Aaron Gulyas offered another interesting piece of information: turns out that back in high school he used to be a huge fan of Tom Clancy's Patriot Games novels, where he learned about this technique for the first time; Clancy had a very close relationship with the CIA and his books were full of accurate descriptions of espionage tactics, so it's fair to assume the spelling technique was indeed standard practice among spooks of the time. Were the Serpo hoaxers and Apple executives also inspired by these novels, or is this little detail a clue that the anonymous emails were not just solely intended to build a 'UFO fanfiction' for the amusement of Martinez's forum members?

My own personal yet-unconfirmed speculation on the matter, is that perhaps Serpo was a prototype specifically designed to test and calibrate the computerized surveillance programs Edward Snowden warned us about in 2013. It is definitely not unreasonable to assume that by 2005 (when Serpo went public) these spying systems were already in existence, but perhaps they were not mature enough yet to detect electronic communications on a global scale. So what better way to check the NSA system than by setting its net on a smaller, more contained pond instead of the whole ocean? A pond like the small community of online UFO researchers, in which you've already placed a hashtag term that's easier to track down than 'terrorism' or 'jihad'? A hashtag in the form of a made-up word that's not totally foreign-looking, yet it will be only used in the communications you are focusing on?

Like the story of an alien/human exchange program, my Serpo/Snowden scenario has enough plausibility to be tantalizing. Yet I'm the first one to admit it's just an speculation on my part. Still, Serpo remains a cautionary tale than when it comes to the UFO mystery, you ALWAYS need to be wary of unsolicited gifts handed out by anonymous sources --because they may turn up to be poisoned apples.