Video May Show Ghost of Knight at Haunted Berkeley Castle

Despite all of the ghost-hunting organizations and television shows today, it seems the best way to spot a ghost continues to be by not looking for one in the first place. That was the case with a video shot by an experienced video technician testing his new drone over Berkeley Castle in Gloucestershire England. The test provided some great aerial views of the ancient haunted castle and a moving image which doesn’t take much imagination to believe it’s a ghostly knight riding through the gate. Is it the spirit of a faithful follower of Edward II trying to warn the king of his gruesome demise? Or possibly a knight running late for the show of the last court jester, who died in the castle under mysterious circumstances?

It’s the type of ghost video that’s easy to ignore as a camera aberration or a hoax … except it was shot by Thomas Arnold, a TV production technical specialist who told GloucestershireLive that he took the proper steps to first eliminate the possibility of camera malfunction and then to look for other possible explanations.

"Where the footage was shot, the drone lost contact with the control, which was with me. I pressed the 'return to home' key, but it wasn't until I got home that we noticed what I would describe as an apparition going through the courtyard." 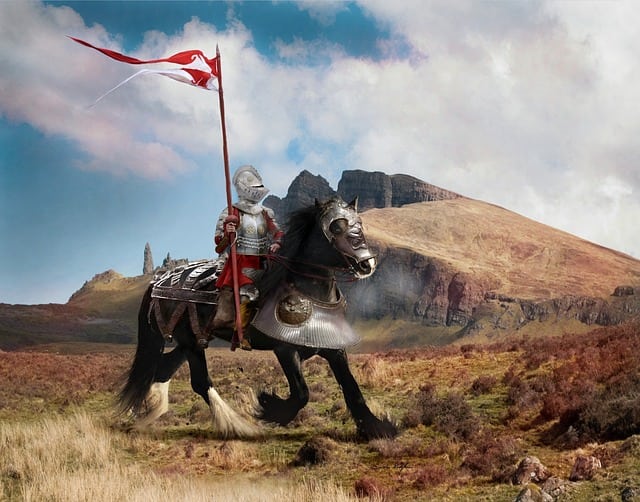 Yes, it was during the ten seconds the drone was out of contact with the remote that it picked up the apparition. However, Arnold found nothing that would indicate the drone malfunctioned – loss of contact with the remote is a common occurrence in droning. He says he ran through the video and saw nothing else unusual. Then he took the investigation a step further – he checked the weather conditions for wind speed and wind direction and the local chimneys to eliminate the possibility that the smoky image was actually smoke.

And then he really impressed ghost hunters by searching for similar images of ghosts at Berkeley shot from the same aerial view and found none.

"I have looked online and I can't find any HD footage of a ghost so I think this is really unusual. It's clear as day, in daylight and in HD. It's brilliant."

OK, Thomas. It’s definitely a quality video (see it here), but does it show what he believes -- a ghost of a knight on horseback?

Berkeley Castle, built in 1153, is famous for its dungeon – which held the corpses of prisoners and animals – and a windowless room next to it where nobles were held and tortured by the smell. That room held Edward II in 1327 after he was overthrown by his wife, Queen Isabella, and her lover, Roger Mortimer. When the stench didn’t kill him, two jailers did by ramming a hot spit up his buttocks and into his bowels. His screams are said to be heard every September 21st, the anniversary of his death.

After a death like that, would Edward’s ghost be riding a horse? Probably not.

Another mysterious death at Berkeley Castle was that of Dicky Pearce, better known as the Last Court Jester. After working like a fool (literally as well as figuratively) for the Earl of Suffolk, Dickey was hired by the Berkeley family. At a castle performance in 1728, Dicky lost his balance while heckling from the minstrel gallery (a balcony above the theater) and fell to his death. Or was he pushed? There were rumors that a guest complained about some of Dicky’s comments – censorship was fatal in those days.

Was the wispy image in the video the ghost of court jester Dicky Pearce riding in to avenge his mysterious death? Thomas Arnold will believe either one since he had another ghost encounter as a child. With his video experience and research, it’s tough to discount it as a camera glitch or a hoax.

POOR DICK ALAS! IS DEAD AND GONE
WHAT SIGNIFIES TO CRY!
DICKYS ENOUGH ARE STILL BEHIND
TO LAUGH AT BY-AND-BY