Some things never change. Over 30 years later, Indiana Jones and the Temple of Doom is still the most chilling of the Indiana Jones series with its scenes of horrific child labor and gruesome human sacrifice. And, over 550 years later, the Chimú peoples of Peru are still the most chilling and gruesome practitioners of child human sacrifice in history. Sadly, only one is fiction.

Here’s one world record no one should brag about. An update to the report in March 2018 of the discovery of the ancient remains of 12 children in Huanchaco on the northwestern coast of Peru who were brutally sacrificed, some with evidence of their hearts being ripped out, has now put the total number of child sacrifice remains found at over 140, making it the largest single site child sacrifice in history. If that wasn’t enough, the children were buried with the remains of over 200 baby llamas, adding animal cruelty to the list of horrors in Huanchaco.

"I, for one, never expected it. And I don't think anyone else would have, either." 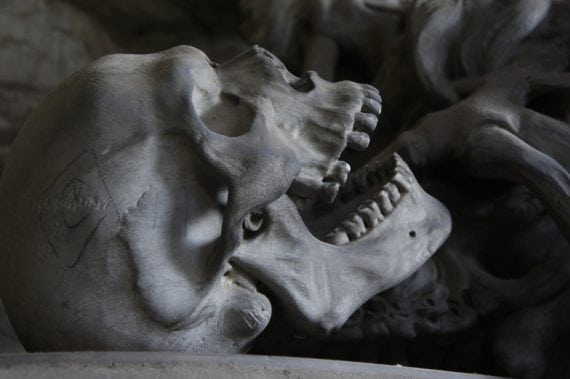 National Geographic broke the storylast month when construction workers found the first set of remains while laying water pipes in Huanchaco, but the investigation team brought in, led John Verano of Tulane University, was not ready for what they found (caution - gruesome photos) after digging just a little deeper at the site formally known as Huanchaquito-Las Llamas.

“The skeletal remains of both children and animals show evidence of cuts to the sternum as well as rib dislocations, which suggest that the victims' chests were cut open and pulled apart, perhaps to facilitate the removal of the heart.”

It gets worse. The evidence at the site indicates that the massacre was a single event, concluding with the ritualist burial of all of the children facing west towards the Pacific Ocean and all of the baby llamas facing east towards the Andes. The remains of three adults who died by blunt trauma to the head were also found, but not in graves, indicating they were part of the sacrifice.

Unbelievably, it gets worse. Footprints preserved in the muddy shore show that the children and llamas were walked there and, while skid marks indicate the animals may have fought back, the children did not. Verano points out the remains reveal that whoever was responsible was skilled at ritual killing because the chests were all cut open with the same efficient stroke and there was no sign of hesitancy or resistance. It appears both boys and girls were sacrificed and they came from all over the Chimú empire and from many different ethnic groups.

There’s only one question left … why?

"There's this idea that ritual killing is contractual, that it's performed to get something from supernatural deities. But it's actually a much more complicated attempt at negotiation with those supernatural forces and their manipulation by the living."

Haagen Klaus, a professor of anthropology at George Mason University and an authority in child sacrifices, agrees with previous theories that the muddy ground where the sacrifices occurred indicate the area was experiencing severe rains and flooding due to an El Nino event that hurt farming, fishing and living in Huanchaco. When sacrificing adults to the rain gods didn’t work, Klaus thinks desperation led them to offer something more precious … children.

Not surprisingly, it will probably get worse, according to team co-leader Gabriel Prieto of the Universidad Nacional de Trujillo.

"Las Llamas is already such a unique site in the world, and it makes you wonder how many other sites like this there may be out there in the area for future research. This just may be the tip of the iceberg."

One thing is certain … we don’t want to see this in a movie.