If you’re looking for a bone or other physical relic of a pope from the early Catholic Church, a good place to start would be in a church, where relics of saints, particularly ones for whom the local church is named after, can be found inside the altar or in display cases. Another good searching spot would be Rome or Vatican City, where remains of the first three recognized popes – Peter, Linus and Cletus – are buried. Generally speaking, the last place one might look for a relic of a pope is in a trash bin in London. Yet that’s exactly where sanitation workers found a small leather case containing a bone fragment and a tiny note that read in Latin “Ex Oss. S Clementis” or “from the bones of St Clement.” Is this a 2000-year-old sliver of the fourth pope?

According to a blog set up to help find a suitable place for the possible pope piece, the box containing the bone was found by Enviro Waste workers sorting through trash picked up on a route through Central London late last year. Sealed with wax and tied with a red cord, the red-and-gold case (seen here) contained the bone fragment and the faded paper under a glass cover. That was enough to get James Rubin, owner of Enviro Waste, pretty excited.

“You can imagine our amazement when we realised our clearance teams had found bone belonging to a Pope – it’s not something you expect to see, even in our line of work. We often come across some weird and wonderful things on clearances, but we were definitely not expecting to find a bone fragment of an apostle. We know this is an important piece of history and are keen to find the most appropriate place for its final resting place, which is why we’re asking for help from members of the public.”

While Rubin is amazed, experts are not. St. Clement was the fourth pope from 92 to 101 CE. Thought to be 85 at the time of his death, it’s said he was banished to work in a quarry in Greece by the Roman emperor Trajan. It was there that he had a vision of a lamb and found water at that spot, quenching the thirst of his fellow workers and converting many to Christianity -- which explains why he's the patron saint of quarry workers. For that, Clement was allegedly tied to an anchor and tossed into the Black Sea. Fortunately, his body was said to have been recovered by his disciple Phoebus and at some point his remains were kept in a grotto at the Inkerman Cave Monastery in Crimea. In 860, some of the relics and possibly the anchor were taken to the Church of San Clemente in Rome. It’s alleged that Clement’s head is at the Kiev Monastery of the Caves, an Orthodox Christian monastery in Kiev, Ukraine.

What about the bone at Enviro Waste in London? Candida Moss, Edward Cadbury professor of theology at the University of Birmingham and a relics specialist, was interviewed by MailOnline and expressed her doubts about its authenticity.

“The box itself was created centuries after the death of Clement and, without carbon dating, there is no way to tell how old this bone is. While early Christians were, like all ancient people, interested in burying their dead and memorialising them, they weren’t venerating their remains much less dividing up their bones into tiny pieces for distribution among the faithful. They wouldn’t do that until hundreds of years later.”

Why not just do a DNA compassion of the bone in London, the bones in Rome and the head in Kiev?

“But it is far more likely that his body was never rediscovered after his death.” 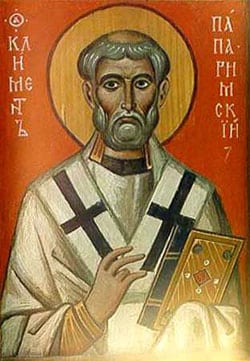 Poor Clement. If Moss isn’t interested in DNA or carbon testing of his alleged relic, perhaps James Rubin at Enviro Waste will be. It has to be more interesting than the billions of plastic bottles or the fatbergs he sees every day.

All the President’s Little Green Men: UFOs and the 2016 U.S. Election