A ‘quest for the holy grail’ once meant a search for the cup passed around at the Last Supper, but the failure of that quest (so far) has allowed the term to be used for a wide variety of campaigns to find something notable in its field. A Google search on ‘the holy grail of’ returns hunts for the holy grail of investing, guitars and farts. Have we cheapened the phrase? No doubt, but a recent search for what was called “the holy grail of shipwrecks” has ended in success and lived up to the name with its cargo of treasures worth an estimated $17 billion. Holy grail!

"We've been holding this under wraps out of respect for the Colombian government."

Rob Munier, vice president for marine facilities and operations at the Woods Hole Oceanographic Institution, explains why his organization has kept the 2015 discovery under wraps (shouldn’t that be under water?) since November 27, 2015. That’s when an autonomous underwater robot called REMUS 6000 (soon to be a band name) discovered a shipwreck at a depth of 2,000 feet off the coast of Cartagena, Colombia. The exact location is being kept secret after photographs of carvings on the cannons positively identified the ship as the San Jose, a Spanish galleon which sank on June 8, 1708, during a battle with the British in the War of Spanish Succession. (Photos of the wreck and the REMUS can be seen here.)

For those who slept through the War of Spanish Succession in history class, it started in 1701 after Spain’s King Charles II died childless in November 1700 and members of the Austrian Habsburg and French Bourbon families began fighting over the chance to acquire the Spanish empire and control most of Europe. Charles left the throne to Louis XIV's grandson Philip, throwing the balance to the Bourbons, but the Hapsburgs and the members of the Grand Alliance (which included England as well as Bavaria, Sweden, the Dutch Republic and others) contested it and the war lasted until 1714 when a number of individual treaties led to the rise of British power and the decline of the Dutch Republic and the Holy Roman Empire.

Just prior to the the war, Spain commissioned the San Jose and the San Joaquín – twin 60-gun, 3-masted galleons that became part of the Spanish treasure fleet that collected gold, silver, emeralds and other treasures from its colonies to fund the war. During a battle with the British fleet off the coast of Cartagena, the San Jose’s powder magazines detonated, killing all but 11 of the 600-person crew and sinking the ship … in a location that’s been hunted for ever since. 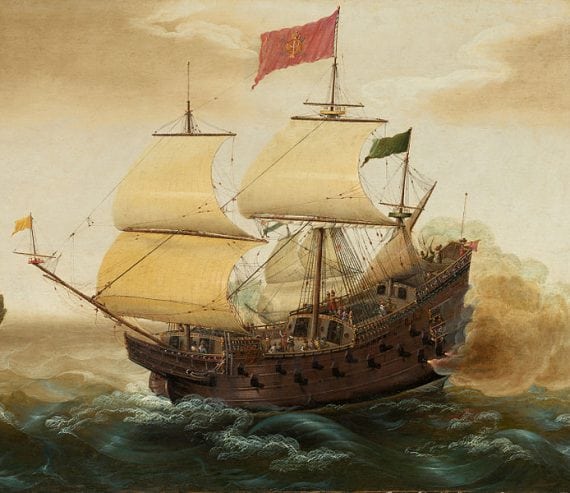 Why? It’s speculated that the ship was carrying up to 11 million 4-doubloons (8 escudos coins that were 92% gold) and an untold number of silver coins. The reports are putting the current value of this cargo at anywhere from $4 billion to $17 billion. Needless to say, the Colombian government doesn’t want anyone else to find it. Needless to say, other countries and private salvage companies are fighting over it. Needless to say, the rest of the world wants Colombia not to exploit it but to do as it has promised – build a museum and a conservation laboratory to display and preserve the artifacts for the public to see and for historians to study in an attempt to better understand what was going on in both Europe and the Americas in the early 18th century.

Needless to say, $17 billion in gold and treasures lost for over 300 years is definitely a “holy grail.”