A Strange Tale of a Black-Eyed Boy

The weekend of April 13-15 of this year marked the 31st anniversary of the annual Ozark Mountain UFO Conference. I was there to speak on the issue of the Men in Black. My lecture focused on the history of the MIB phenomenon, the key players in the affair (such as Albert Bender and John Keel, to name just two of many), and the theories for who or what the MIB might be, such as government agents, time-surfers, or something definitively supernatural. As I always do in that lecture, I gave my opinion that the MIB phenomenon is likely linked to such issues as the Women in Black, the Hat Man, the Shadow People, and the Black-Eyed Children. It's a lecture that often provokes a lot of feedback - chiefly because the subject is so downright weird. And widespread too.

Of the various people at the Ozark gig who came up to me to share their experiences, one was a Texan man who I'll call "Mike" and who had an extremely odd story to tell about his very own encounter with a Black-Eyed Child (BEC). I have to say, though, that his report was much stranger than so many of the other such cases I have on-file. I thought I had seen and heard just about everything. Not so. For about twenty minutes, at my table, Mike and I chatted about an encounter he had in the late summer of 2014. The location: his then-home in Wimberley, Texas.

It all went down late at night - as so many of the encounters with the Black-Eyed Children do. It was around 11:15 p.m. (ish) when there was a knock on Mike's front-door. He went to the door and looked through the spy-hole. The late-night visitor was a very skinny, young boy, dressed in a black t-shirt and black jeans. Mike cautiously opened the door a few inches and asked the boy what he wanted - as the boy kept his head held low and looking at the ground. According to Mike, the boy asked for money so that he could get something to eat. But, things just didn't seem right, said Mike. It was, he said, as if the plea for cash was just a ruse. Mike felt threatened, and even frightened, by the bizarre nature of the situation, which he was convinced was somehow staged.

Mike said that he was sorry, but he couldn't help. At which point the boy raised his head and looked Mike in the face. He was shocked to see that the boy in black had completely black eyes and very pale skin that appeared "like it was painted on." Not only that, Mike was sure that the creepy kid's black hair was actually a wig, and that his eyebrows were "painted on too." Very oddly, the boy then walked away - backwards, no less - keeping his black eyes on Mike until he reached the end of the driveway. At that point, the boy turned and walked off into the street and was lost from view. Mike was shaking, cold and clammy. He shut and locked the door. 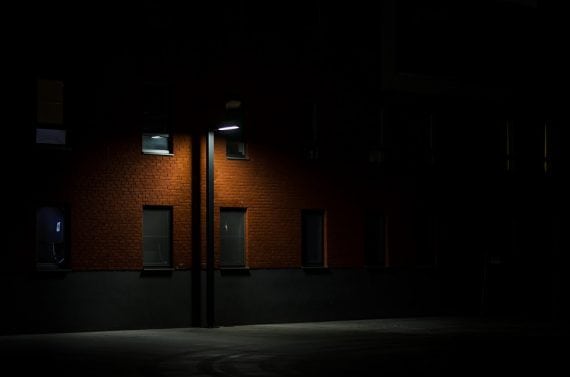 Had it not been for the black-eyes, Mike explained to me, he would have suspected that the boy was part of "a team" that was going to break into his house. It was, however, the absolutely weird and surreal nature of the situation that led Mike to say nothing - for a while, at least. It didn't take any time at all for Mike to become acquainted with the phenomenon of the Black-Eyed Children: just typing the words "black eyes" and "boy" into Google revealed to Mike numerous accounts similar to his.

While I have heard many BEC-themed stories, this is the very first time I have ever come across a case involving a Black-Eyed Child wearing a dark wig and false eyebrows! Mike had his very own thoughts on this issue. He admitted to me that his face-to-face encounter with the creepy kid led him to dig further into the worlds of Ufology, of the supernatural, and of the paranormal. As a result, Mike suggested to me that if the boy had removed the wig, and wiped off the eyebrows he (or it) just might have looked very "alien"-like. This caused Mike to suspect that some kind of extraterrestrial "infiltration" might have been at work - and may still be at work. Maybe everywhere, he suggested to me. It's an intriguing and disturbing theory, which I will expand on in part-2 of this article.