Bringing Back the Tasmanian Tiger with Numbats

On the list of animal names that would send the poor creature into therapy if it had to go to school with human kids, “numbat” is certainly in the top five. It’s also the number one animal mistaken for a thylacine or Tasmanian tiger – possibly because it’s the thylacine’s closest living relative – and that distinction may make it the number one candidate to help bring its extinct cousin – or at least some genetic variation of it – back to life. If that happens, you mean kids will definitely have to stop picking on numbats.

Actually, a returning thylacine will first have to thank the wooly mammoth, or the genetic combination of returned-from-extinction wooly mammoth and modern Asian elephants that Harvard geneticist George Church is trying to create. He has rightly referred to the creature as a “mammophant” because, while the mammoth genome has been sequenced, the mammophant would be made using CRISPR gene editing to reprogram an Asian elephant with mammoth characteristics.

According to news.com.au, that same strategy is now being considered for the Tasmanian tiger and its closest living relative, the numbat. While it’s a marsupial, the numbat branched off from the Australian marsupial carnivores family (Dasyuromorphia) at least 32 million years ago during the late Eocene period and has evolved into more of a marsupial anteater than a dog-like thylacine.

That doesn’t seem to bother University of Melbourne biologist Andrew Pask, who announced in late 2017 that he had successfully sequenced the entire genome of a Tasmanian tiger using a four-week-old joey that was preserved in alcohol 108 years ago and had survived in good enough shape for genome sequencing. While the first instinct at that point is to consider creating an embryo and implanting it in a very similar species, no such species exists for the Tasmanian tiger.

That led Pask to look at the research by Church, who is CRISPR-ing the Asian elephant DNA into a mammoth.

“What you have to do is take that elephant DNA and make all the changes you see in the mammoth genome on the elephant’s genetic blueprint. Basically you’re just editing the (elephant) DNA to make it look like a mammoth.” 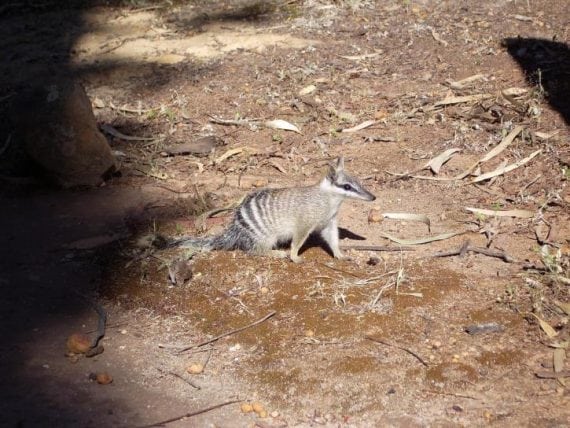 “You would have to make a lot more changes to make the numbat DNA look like a thylacine but the technology for making those changes has gotten exponentially easier in the last five or so years because of the people who are doing the mammoth work.”

That’s ‘mammoth’ both in noun and adjective form. Pask plans to let Church and his team do the mammoth mammoth work before tackling turning a numbat into a Tasmanian tiger … or a thylabat … or a numger.

In the meantime, try to be nice to a numbat.