Buckeye Beasts is a recently-published book from Tyler Houck (you can find out more about Tyler's cryptozoological research at this link). The sub-title of his book will tell you exactly what it's all about: Historical Accounts of "Gorillas," "Wild Men," and Other Hairy Monsters in Ohio. It's a regional study of Bigfoot- and Wild Man-type things that predate the modern era of reports of Bigfoot. I particularly like reading regional studies of mysterious cryptids, primarily because you very often come across accounts that don't appear in books that are nationwide or worldwide in nature and scope. So, with that said, let's get to the heart of the book.

As the back-cover blurb states: "In this book, Tyler Houck examines these reports spanning from 1869 to 1950. Many are presented as they originally appeared and are then compared to modern Bigfoot reports, and other historical and contemporary reports of strange, man-like cryptids from around the world." 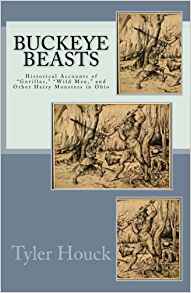 Clearly, a lot of work has gone into Buckeye Beasts (which contains some cool illustrations), and you won't be disappointed by the content. The primary sources of the data in the book are old newspapers, which are often extremely useful when it comes to digging out obscure accounts. It's interesting to note that many of the reports that Tyler refers to and comments on do not sound like Bigfoot. Rather, they come across like descriptions of what can only be termed as hair-covered humans. Other reports, meanwhile, are described as involving creatures that closely resemble gorillas and other apes. In that sense, it appears that we are dealing with two separate phenomena - unless, of course, the witnesses were mistaken. And, there are a few likely hoaxes too - something which Tyler addresses.

What I found to be particularly intriguing is the fact that, in many of the early reports, the creatures were described as being extremely violent - to both people and dogs. While reports of dangerous Bigfoot today are very rare, Bigfoot's hostility to dogs has been well-chronicled in many books over the last few decades. In that sense, it's intriguing to note that this same, precise hostility was being reported more than a century ago.

There is one aspect of Buckeye Beasts that I found to be particularly fascinating. In the past, and here at Mysterious Universe, I have noted how rumors have circulated to the effect that many so-called cryptid are just escapees from zoos and circuses: chimpanzees, gorillas, etc. I found it very significant to note that Tyler has uncovered more than a few such examples that date back to the very early years of Wild Man reports. In other words, there is nothing new at all about the "animals escaping from circuses" rumors. What this does demonstrate is that - maybe a couple of cases aside - this is a case of urban legend enduring for an astonishingly long period of time.

A careful study of the Ohio stories reveals other interesting data too, such as the fact that the Wild Men were often seen in a "crouching" position, and that some of these same animals / "Manimals" were seen running at high speed on not just two limbs but four. We are also treated to a lot of highly entertaining tales of frightened 19th century townsfolk hitting the woods and seeking out the monstrous things that were said to lurk within.

As the book gets to its end, Tyler takes a look at both the similarities and the differences between the creatures of the 19th century (and of the early 20th century too) and those reported today. Tyler also brings up matters such as European Wild Men, today's Bigfoot, and the Australian Yowie - which is also a Bigfoot-like entity. Tyler asks: "Is this all something to do with mythology and folklore, hoaxes on slow news days or misidentifications, or is there something else behind the stories?" Well, I won't spoil things by revealing Tyler's conclusions and theories, but I will say they are thought-provoking and well worth debating.

If you are interested in the Bigfoot phenomena, and particularly so the historical nature of the mystery, you should definitely get hold of a copy of Buckeye Beasts.

The Sinister Hungry Ghosts of Japan