It’s often said that if you can remember the 60’s, you probably weren’t there. A similar adage may be true about another event: If you can remember seeing the EmDrive work, you probably weren’t there. That’s because the EmDrive doesn’t work, at least according to German scientists who attempted to recreate NASA’s “successful” experiment and showed that it couldn’t have worked because it’s impossible. When in the name of Nikolas Tesla and Newton's Third Law of Motion did that ever stop anybody?

A corollary to the aforementioned EmDrive adage is: If you can explain it, you don’t understand it. In the simplest of terms, the EmDrive is a conical radio frequency (RF) resonant cavity thruster that was said to create propellantless propulsion by shooting microwaves inside the cone which pushed against the narrow front end and propelled the craft forward … to infinity and beyond. First designed by engineer Roger Sawyer in 2001, it challenged scientists (not to mention Newton's Third Law of Motion) until 2014 when NASA claimed its Advanced Propulsion Physics Laboratory (Eagleworks Laboratories) had defeated “for every action, there is an equal and opposite reaction” and created measurable propellantless thrust. 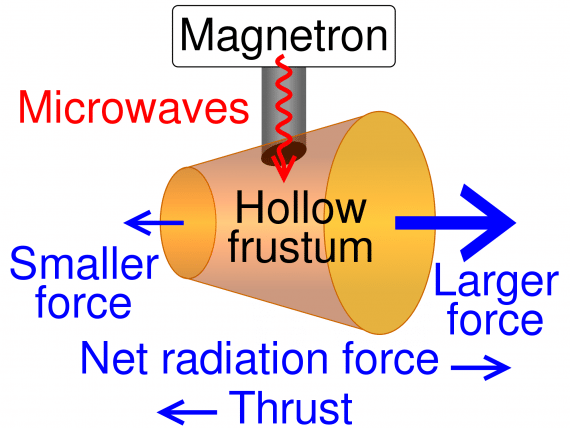 “Bull hockey!” (or some form of that) said everyone who believed Newton’s Law was one of the things holding our fragile universe together. ‘Everyone’ includes a team in Germany led by Martin Tajmar of the Institute of Aerospace Engineering at Technische Universität Dresden. They set out to either create their own better EmDrive or prove NASA wrong and Sir Isaac right. According to their paper, presented last week at the Space Propulsion 2018 conference held in Seville, Spain, the researchers followed NASA’s design, built an EmDrive called SpaceDrive, tested it in a vacuum and measured … something. Was it propellantless thrust?

“First measurement campaigns were carried out with both thruster models reaching thrust/thrust-to-power levels comparable to claimed values. However, we found that e.g. magnetic interaction from twisted-pair cables and amplifiers with the Earth’s magnetic field can be a significant error source for EMDrives.”

It was the cables! Tajmar’s team determined that what NASA detected and thought to be propellantless thrust from the EmDrive was actually just a reaction between the EmDrive’s twisted-pair cables and Earth’s magnetic field. What is the German word for ‘Gotcha!’?

So German space travelers won’t be flying to infinity and beyond in an EmDrive-powered spacecraft anytime soon. However, the team made sure to point out to their investors and donors that the project was not a total loss.

“At least, SpaceDrive is an excellent educational project by developing highly demanding test setups, evaluating theoretical models and possible experimental errors. It’s a great learning experience with the possibility to find something that can drive space exploration into its next generation.”