Adolf Hitler and Nazi Germany are common subjects for wide-ranging conspiracy theories. It is frequently alleged that the Nazis had access to recovered UFO technology, were developing all manners of flying saucers or other incredible craft, or were on the verge of unleashing terrible superweapons capable of killing every last living thing on Earth. Among the most pervasive Nazi conspiracy theories is the claim that Hitler survived the fall of Berlin and somehow escaped to South America on a submarine. So-called “declassified documents” which allegedly prove Hitler lived pop up from time to time, but so far there has been no concrete, definitive evidence that Hitler might have spent his post-war life painting still lifes on a beach in Argentina. 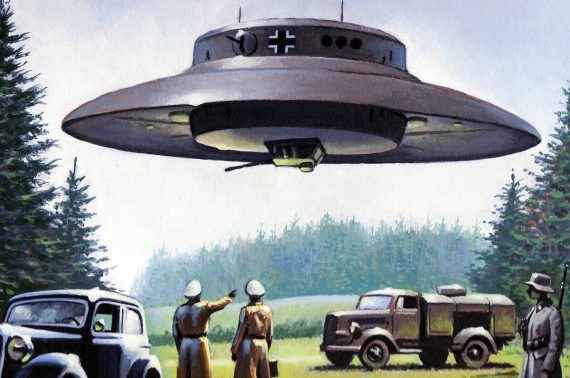 In fact, a new study published in the European Journal of Internal Medicine claims to prove just the opposite - that Hitler died in 1945 in Berlin exactly as history books lay it out today. In 2017, Russia’s secret service and intelligence agencies allowed a team of European researchers to examine Hitler’s supposed remains for the first time since 1946. Using detailed analyses of what are allegedly a few of Hitler’s teeth, dentures, and a skull fragment, the scientists have no concluded that the recovered remains are likely indeed Hitler’s, perhaps proving that he met his fate in a Berlin bunker as the end of his tyrannical regime drew near.

This conclusion was reached through a combination of three key findings: one, the team found that the owner of the teeth was a vegetarian - or at least they found that there were no traces of meat fibers on the teeth they studied. Hitler was a vegetarian, so this finding suggests the teeth could indeed by the Führer’s. Secondly, the dentures displayed a bluish discoloration, possibly suggesting a chemical reaction between cyanide and the dentures’ metal frame. Hitler is said to have swallowed a cyanide capsule as the Soviet army closed in on his bunker. Finally, the skull fragment was found to have a small hole on its left side, possibly caused by a bullet. Some of the officers in the bunker with Hitler reported that the dictator shot himself when the Russians encircled the bunker. “We didn't know if he had used an ampule of cyanide to kill himself or whether it was a bullet in the head,” says study author Philippe Charlier. “It's in all probability both.”

Hitler’s remains, along with those of his new wife Eva Braun, were burned outside and buried in a shallow shell crater before being recovered by the Red Army. Or so the story goes. There have been past attempts to analyze Hitler’s supposed remains, all reaching different conclusions. Will we ever know what really happened to one of history’s most pivotal and infamous dictators?

Shift in Uranus is Driving People to Buy Bitcoins