How Closely Are Ufologists Watched By Government Agencies?

That's a question I'm often asked, mainly because of my interest in the Men in Black mystery. Although there is no doubt in my mind that the vast majority of all MIB encounters are of a paranormal nature, at least a small number are connected to government agencies. Indeed, there is hard evidence showing that UFO-themed researchers and groups have been watched - and at times watched closely. For example, the FBI has released its files on many of the Contactees of the 1950s, such as George Adamski, Truman Bethurum, George Van Tassel, and Frank Stranges. It's important to note, though, that the UFO aspects of the investigations were secondary; sometimes, even further down the line than that. Issues relative to politics and communism were far more pressing, from the FBI's perspective. In the U.K., in the late 1950s, the Aetherius Society was secretly watched by the British Police Force's Special Branch. Not for their beliefs in aliens or UFOs, though, but because of their stance on atomic weapons. 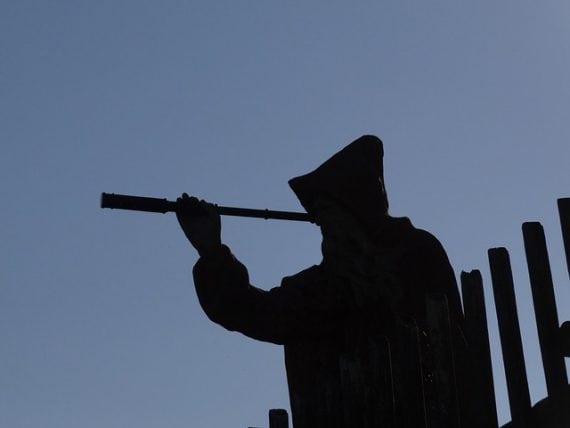 With that all said, it's time now to take a look at one of the earliest UFO research groups that was watched by the CIA: the Civilian Saucer Investigation (although in some of the CIA's papers on the CSI, it's incorrectly referred to as the California Committee for Saucer Investigation). A CIA document of February 9, 1953 begins as follows (you can find the document at this CIA link):

"1. Recently a member of the Los Angeles Office had occasion to hear Dr. Walter Riedel tell something of the activities of the California Committee for Saucer Investigations (CSI). His comments, as follows, may be of interest: 2. Dr. Riedel indicated he was formerly Chief Designer at the German Experimental Rocket Center at Peenemunde. He has been in the US as a 'paperclip'  scientist for some years. He is now a Project engineer in the Aerophysics Department (Guided Missiles) of the North American Aviation Corp. He gave every impression of being a competent scientist, especially knowledgeable on rocket matters. He seemed a balanced person, not given to fixations."

The CIA continued: "3. CSI has been in operation some years, composed of private individuals intrigued and scientifically interested in finding an explanation for 'saucer' phenomena. To date, they have received some 1570 letters relating to reported sightings. Of this number, they have been able to immediately or quickly eliminate 75% as not worth follow-up. The great proportion of this 25% have been discarded upon further investigation. What was somewhat surprising to the writer was the exhaustiveness with which these investigations are being made. Not only are very careful calculations made, if the data exists, to check the possibility of the report being physically possible (e.g., in terms of lines of sight), but the individual reporting the sighting is investigated privately at his place of residence to establish a general background of reliability and credibility. Of the 25% investigated, perhaps 25 or so sightings have been established as 'reliable' in the sense that no known existing explanation exists for them. Apparently, most of these have been forwarded to Wright Field, Dayton, Ohio, although there appears to be a time lag of some duration while CSI is making its own check and calculations. Dr. Riedel's description of one reported sighting by a TWA pilot and crew, and the follow-up with respect to it, was impressive to the writer in the thought applied, the pains taken, and the very careful application of scientific method."

The CIA took a particular interest in a plan the CSI had to create a hoaxed UFO event, for an interesting reason: "4. So serious is CSI with respect to its investigations that Dr. Riedel indicated that they are going to execute a planned 'hoax' over the Los Angeles area, in order to test the reaction and reliability of the public in general to unusual aerial phenomena. (The sightings reported over Malibu in its Los Angeles papers of 30 Jan 53 could possibly be this hoax.) From this experiment, they hope to ascertain how many people report an aerial visual phenomenon which had been conducted so as to be clearly visible to a large number of people in the area. They will also, of course, be able to test the variation of report details, etc. This experiment is designed to give a better background against which future sightings can be evaluated."

And, finally, we have this from the CIA: "5. Apparently, an eye and interest are also directed toward the USSR for reactions to sightings as reported in the PRAVDA are observed. This interest is also evident in the paper entitled 'Rockets Behind the Iron Curtain,' presented before the annual convention of the American Rocket Society in New York City on 4 December 1952, by George P. Sutton, also of Aerophysics Department (North American Aviation, Inc.) and associated with CSI. 6. Of incidental interest may be the fact that NAA (National Aeronautical Association) suggested politely and perhaps indirectly to Dr. Riedel that he disassociate himself from official membership on  CSI."

As the above shows, the CSI became the subject of a fair amount of background checking on the part of the CIA. Perhaps, such checks still continue with modern day equivalents of the CSI.