In an attempt to solve the mystery of how a cluster of human cells orient themselves into a front, back, top and bottom of an embryo, a group of U.S. researchers avoided restrictions on using human embryos by doing something even more controversial – but apparently legal … they grafted human cells onto chicken embryos to create a form of human-chicken hybrid. Wait … what? Is this the first step to creating a real Chickenman? Who will play him in the movie?

“No one knew what happens after the ball of cells attaches itself to the uterus.”

Ali Brivanlou, a developmental biologist at the Rockefeller University in New York City, headed the research and is the lead author of the study published this week in the journal Nature. If you’re up on your developmental biology, you’ll remember Brivanlou’s name from a previous study in 2016 when he and a different team grew human embryos in a Petri dish for 14 days, breaking the previous record of nine days. U.S. laws forced the team to destroy the cells at that point, but there seemed to be no biological reason why they couldn’t have continued to grow. The team was frustrated because 14 days was not long enough to see the cells organize themselves into future body parts.

Brivanlou already knew that the organization was done by special ‘organizer cells’ which were discovered in 1924 when German researchers Hilde Mangold and Hans Spemann transplanted cells from a salamander onto a salamander embryo and watched them grow into a second conjoined salamander. That sounds like the opening scene of a horror movie that could only be made better/scarier if the cells were human. 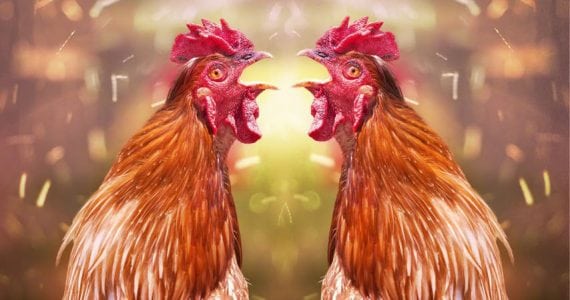 Brivanlou also knew that chicken embryos mature sooner and grow faster than human embryos. Under his direction, the researchers avoided the 14-day restriction by growing human embryonic stem cells into embryo-like (what would that be?) “structures” called gastruloids that they then attached to 12-hour-old chicken embryos which they claimed are the chicken-equivalents of 14-day-old human embryos.

The human organizer cells in the embryo-like (this still sounds fishy) structure organized the chicken embryo to form a second conjoined chicken embryo (sound familiar?) which Brivanlou claimed did not reach maturity and “hatch.” 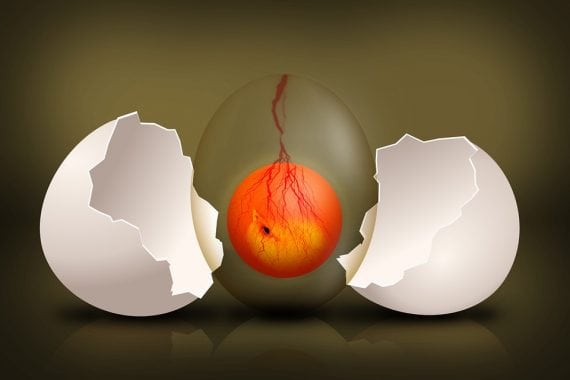 Or were they destroyed by nervous or guilt-ridden researchers?

“Once you transplant the human organizer into a chicken embryo, the language it uses to instruct the bird cells to establish the brain and nervous system is exactly the same as the one used by amphibians and fish.”

I told you it sounded fishy. While Brivanlou claims that this is an ethical solution to studying early embryonic growth in order to potentially grow artificial organs or manipulate cells into regenerative tissues to combat diseases such as Alzheimer’s, he still prefers to use the real thing.

“There is no substitute for studying the real embryo. Everything else we do when we try to model kind of oversimplifies it. Human embryonic stem cells and eggs have all the information. Everything else is pushing the first domino.”

They’ve created a human-chicken hybrid. Are the dominoes already falling?

Would chickens falling like dominoes be a cool opening to the “Chickenman” movie trailer? 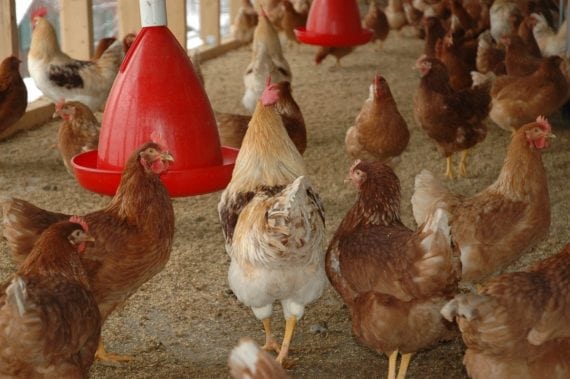 Alien Civilizations and the Search for ‘Eyeball Planets’