There's a lot hidden under Antarctica. Spoiler: it's not Nazi bases or UFO hangers, at least not yet. According to a paper published in the journal Geophysical Research Letters, scientists have recently discovered an enormous series of mountain ranges and deep canyons buried beneath the south pole. This is the first real radar look at what's underneath the South Pole, and gives scientists a better understanding of how the ice will flow out from the center of the world's largest desert as climate change drives temperatures upwards.

The research was conducted by the European Space Agency PolarGAP project. The researchers discovered three canyons and a vast mountain range along the ice divide, a ridge in the south pole region that determines where ice will flow: the Weddell Sea in the east or the Ross Sea in the west.

Some of these mountains are over 8,000 feet high, and the largest canyon, named the Foundation Trough,  runs 250 miles long and a mile deep.  All of these geological features are completely hidden from view by solid ice. At its deepest point the ice covering these mountains and canyons is a full 1.2 miles thick.

The world's most mysterious continent is covered almost completely in ice, and due to its incredibly remote location, scientists have been unable to get a decent view of the topographical features they knew were underneath. Because it's at the South Pole of Earth, no orbiting satellites pass over it, and radio-echo sounding data is obscured by the massive amount of ice.  The PolarGAP project had to use radar sensing aircraft to collect the data on what Dr Fausto Ferraccioli calls "one of the least understood frontiers in the whole of Antarctica."

Because of this data, scientists now have a far better understanding of the dynamics of how Antarctica might have changed over time and how it could possibly change in the future. Importantly, scientists now know that these mountain ranges are responsible for how ice makes its way across the continent. 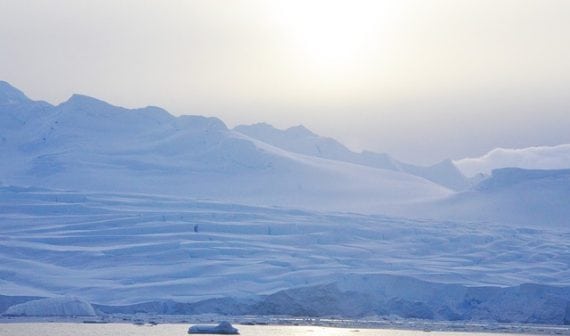 Scientists say that these canyons make up an important "bottleneck" that controls the flow of ice into the sea, but say that thinning ice as a result of climate change could speed up this flow. According to lead author of the study, Dr Kate Winter:

"If the ice sheet thins or retreats, these topographically-controlled corridors could facilitate enhanced flow of ice further inland, and could lead to the West Antarctic ice divide moving.

This would, in turn, increase the speed and rate at which ice flows out from the center of Antarctica to its edges, leading to an increase in global sea levels."

No mention was made, however, of whether or not thinning ice in Antarctica might increase our chances of finding evidence for the hollow Earth.