My previous article was titled "A Strange Tale of Aleister Crowley, John Dee and Loch Ness." It took a look at the weird saga of how Loch Ness Monster-seeker F.W. "Ted" Holiday found himself, in the early 1970s, plunged into a strange world that involved the long-dead John Dee, Edward Kelly and Aleister Crowley - all key figures in the realm of magick. It's now time to take a look at a very similar saga that occurred in the early 1980s, but in Ireland, rather than at Loch Ness, Scotland. It all revolves around a man named Tony "Doc" Shiels. In a June 1, 2013 article here at Mysterious Universe - and titled "Monstrous Intrigue in Monstrum!" - I wrote of Shiels the following:

"That Shiels is part-'Wizard of the Western World,' part-Trickster, part-stage magician, a conjurer of 'things,' and someone whose approach to monster-hunting hardly endears him to regular cryptozoology ('regular cryptozoology,' of course, perhaps being the ultimate oxymoron!), has led more than a few observers to view Shiels’ words, findings, conclusions and photographs (of Nessie, no less) to be less than sound. Too bad for them." 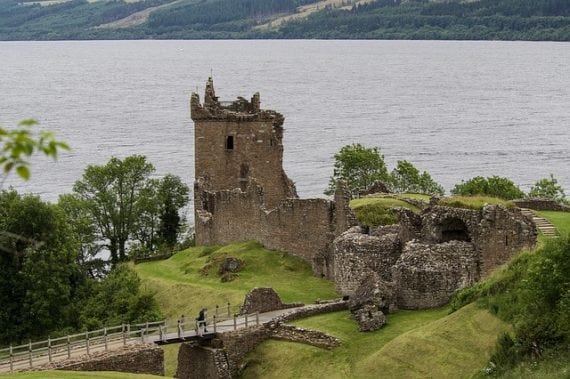 I continued: "Those who hold such views have utterly failed to understand and appreciate what it means to be Doc Shiels. His is a world filled with a deep understanding of the real nature of magic (chaos and ritualistic), the secrets of invocation and manifestation, of the game of the name, of strange realms just beyond – and that occasionally interact with – our own, and that aforementioned Trickster-like phenomenon." Back in 1977, Shiels attempted to, essentially, conjure up a Nessie (or the Nessie, depending on your perspective). It was an attempt that resulted in the capture on film of a long-necked beastie. For some, though, it was a well-orchestrated fake and nothing else. Others in the field of Cryptozoology still can't make up their minds, more than forty years later.

In 1981, Doc was once again engaged in trying to summon up lake-monsters. On this occasion, though, the location was not Loch Ness, Scotland. Rather, it was Lough Leane, Killarney, Ireland. It's an approximately nineteen-square-kilometer body of water. So a local legend goes, ancient treasure lies somewhere in Lough Leane - treasure said to be guarded by a ferocious, three-headed, huge worm. It was while Doc was engaged in trying to find the monster - and the treasure too - that he crossed paths with a young man by the name of Patrick O'Talbot Kelly, who then lived in County Mayo. Like Shiels, Kelly was interested in the process by which lake-monsters could allegedly be called forth and manifested. But, as Doc noted, Kelly seemed to know far more about the Shiels family than Doc preferred him to know. So, Shiels kept his distance and Kelly went on his way. He was not seen again by Doc for around four years.

It was in 1985 that Kelly reentered Shiels' life. During the period of four years that Kelly had been absent, he had spent a lot of time in the United States. While there, Kelly became good friends with a magician, one Tony Andruzzi, who went by the name of Masklyn ye Mage. As Doc learned, Kelly had told Masklyn/Andruzzi that he - Kelly - was related to the long dead Edward Kelly, a colleague to John Dee. You will recall from my previous article that Aleister Crowley claimed he was the reincarnation of Edward Kelly. And Crowley had significant links to Loch Ness - an undeniable lair of monsters. When Kelly reentered Doc's life he claimed to Doc that he had photographed a lake-monster in Lough Leane and presented a not-too-impressive photo to back-up his controversial tale. Things got even more complicated.

Doc also learned that Kelly's father, Laurence, knew Aleister Crowley, back in the 1930s. Kelly revealed that the two met in Paris, France in 1933 - the year in which the Loch Ness Monster saga began in big-time fashion (even though occasional reports surfaced years earlier). Crowley supposedly confided in Kelly, Sr., that he had conjured up paranormal creatures from the heart of Loch Ness some years earlier. All of this  implied (but most definitely did not prove at all) that Crowley had something to do with the sudden wave of monster-based activity in Loch Ness in '33.

The story isn't quite over. In 1969, when Kelly was a  boy, his father took him to Loch Ness - which just so happened to have been the year when a strange tapestry was found near Aleister Crowley's old home of Boleskine House, and that was seen as evidence that a sinister "dragon cult" was secretly operating in the area. In light of all this, it's hardly surprising that cryptozoologist Richard Freeman asked: "Could Patrick Kelly and his father have been performing some kind of ritual at Loch Ness?" Maybe so. Whatever the truth of the matter, we have yet another example of a connection between lake-monsters, Aleister Crowley and Edward Kelly, the latter being a colleague to, and friend of, John Dee. What goes around, comes around - and in mind-bending fashion.