Are you tired of people saying “Been there, done that, got the blurry video” when you tell them about your latest Bigfoot or Loch Ness monster sighting? Perhaps it’s time to go looking for different cryptids. If that’s the case, a good choice for your next vacation (if you’re brave enough) might be Caapucú, Paraguay, where local media reports that residents have recently been seeing a mysterious tiny humanoid called the Pombéro that allegedly captures ungrateful girls and forces them to kiss him and have sex with him. Is he a tiny cable news host too?

“Last night we were resting and suddenly we heard knocking on the windows, like it wanted to get in. We were very frightened with my grandchildren. When the noise passed, we went out to look, but there was no one. As we entered the room we found the bed all wet. We are really scared.”

The story Petrosa Vera told the Buenos Aires media site Cronica on April 8 sounds like just a neighborhood prankster … until that part about the wet bed. Was one of the kids trying to hide an embarrassing accident or was it something else?

“I saw something on the tip of a tree, but it disappeared quickly. Many say it is the Pombéro, others the sad souls or spirits of people who died in an accident a long time ago, but still hovering around here. They throw stones at the houses and hit the windows. The neighborhood is haunted it seems. All we have left is to pray and bless the place.”

If it really a Pombéro, Johana Ugarte, Petrosa Vera and other local women may want to supplement the prayers and blessing with gifts of cigars, rum and honey. Those are said to appease and please the Pombéro – a mythical small humanoid whose name means “The Man of the Night" and whose homeland ranges from northeast Argentina through Paraguay to southern Brazil, which are the same areas where the Guarani live. These indigenous people have a rich oral mythology filled with gods, animals that can change into other beings, and humanoid goblins like the Pombéro.

If it’s any consolation to the women of Caapucú, the Pombéro is generally thought to be a harmless trickster who gets blamed for unexplained occurrences or is used to frighten children into obeying the rules. Described as short and ugly with hairy hands and feet, farmers blame the Pombéro for opening the barn door to free the animals and stealing eggs, chickens and anything else they find missing. It does sound harmless … except for that unwanted sex thing. The Pombéro gets accused of this sordid practice after the fact … generally when the mother is unmarried and the baby is ugly or hairy or both (people can be so cruel). 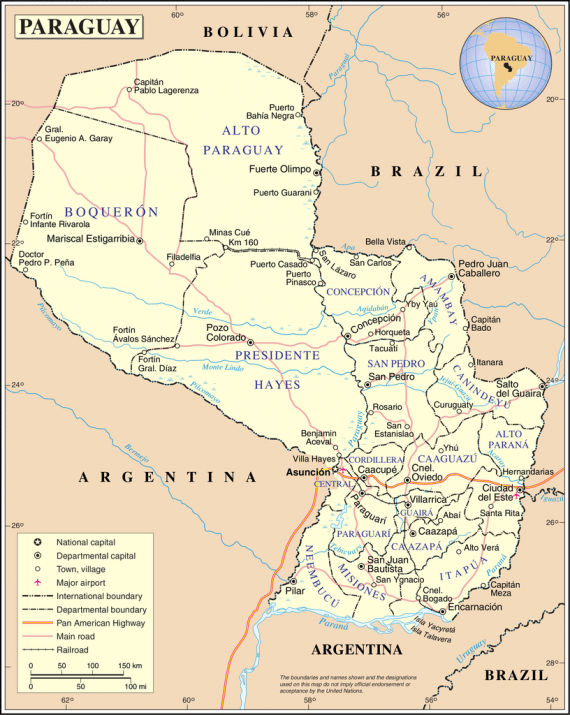 Fortunately, that rum-cigars-and-honey habit, when satisfied, is said to turn the Pombéro into a friendly goblin who guards houses and barns from other less hospitable creatures. However, that may be small comfort because it appears the Pombéro has gotten braver and broadened its field of potential victims ... to men.

"When I felt that he was taking me, I played with the machete and in that he pushed me and threw me by the mango tree that was about 10 meters away. When he tried to get up he grabbed me by the neck and threw me. I tried again to get up and hit me on the back and stomach. "

Twenty-six-year-old Luis Cáceres was chopping his way through the dense forest to take his wife and daughter to a neighbor's birthday when he claims he was attacked by … something. It was dark but he told local media he felt the attacker’s arm and it was hairy. The people who heard the screams found him “totally beaten” and terrified enough that he moved his family from the neighborhood, saying:

"Right now I'm very afraid, it's the first time this has happened to me."

Does he have any rum and cigars?