New Research on the Theory that Octopuses are Aliens

The controversial theory that mysterious and biologically complex octopus is so unique that it had to come from another planet just got a scientific paper backing it.

“Thus the possibility that cryopreserved Squid and/or Octopus eggs, arrived in icy bolides several hundred million years ago should not be discounted as that would be a parsimonious cosmic explanation for the Octopus' sudden emergence on Earth circa 270 million years ago.”

OK, “should not be discounted” is not exactly a bet-your-life savings-on-it endorsement, but it’s still a big deal. In a paper entitled “Cause of Cambrian Explosion – Terrestrial or Cosmic?” published in the Progress in Biophysics and Molecular Biology journal, 33 scientists researching the cause of the Cambrian Explosion – the mysterious point in Earth’s history when single-cell organisms were suddenly overshadowed by complex animals – linked the panspermia or cosmic cause to the equally mysterious and sudden appearance of octopuses.

“The transformative genes leading from the consensus ancestral Nautilus to the common Cuttlefish to Squid to the common are not easily to be found in any pre-existing life form – it is plausible then to suggest they seem to be borrowed from a far distant “future” in terms of terrestrial evolution, or more realistically from the cosmos at large. One plausible explanation, in our view, is that the new genes are likely new extraterrestrial imports to Earth - most plausibly as an already coherent group of functioning genes within (say) cryopreserved and matrix protected fertilized Octopus eggs.” 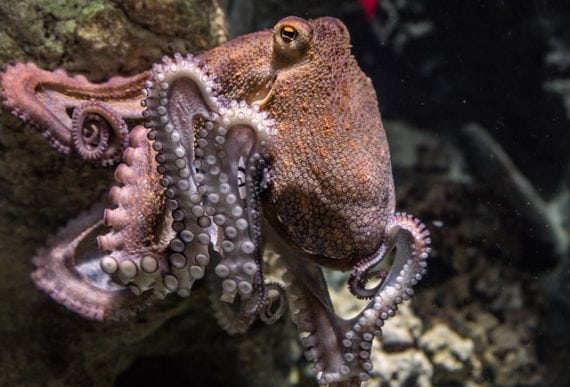 “Cryopreserved and matrix protected” sounds like a Superman origin story with creatures sent by another civilization to populate the galaxy (let’s take a moment to remember Margot Kidder, who played Lois Lane to Christopher Reeve’s movie Superman and passed away this week), but the paper leans more towards the idea that Earth received a bombardment of comets and asteroids that could have been carrying organisms that somehow managed to survive the cold, the radiation and the long trip. Only a complex species could devise a way to do this … an advanced species with a really big brain like … an octopus?

Yes, that seems to be the flying octopus in the panspermian ointment of this particular paper. It singles out octopuses as an (or possibly the only) advanced species that sent preserved eggs during the same period that it speculates asteroids and comets were involuntarily bringing other hardy cells and viruses en masse to ignite the Cambrian Explosion some 540 million years ago. “Speculates” because there’s no physical proof yet of the real cause of the Cambrian Explosion – so panspermia, climate change, evolution and others are in play.

Octopuses are a special and highly unusual species that can edit their own RNA and slow down their evolution – a process that science can’t explain yet. It's interesting that many scientists think the idea of intentional panspermia as their origin on Earth "should not be discounted." Does this mean octopuses are aliens? Only an eight-legged, squishy Jor-El knows for sure.