The discovery of fast radio bursts (FRBs) has been one of the most mysterious recent developments in astronomy. These powerful-but-brief radio pulses were first discovered around 2007, and since then scientists have cataloged over two dozen of them. While on Earth  we tend to think of radio transmissions as a communication medium enabled through technology, astrophysicists have put forward several hypotheses detailing how natural sources might generate these waves. Collisions between dense objects like neutron stars or black holes might possibly generate radio bursts, as might collapsing pulsars or massive supernovas. Ultimately, the point is we don’t know what causes these FRBs, leading to the hope that they might be an alien race’s attempt at intergalactic communication. 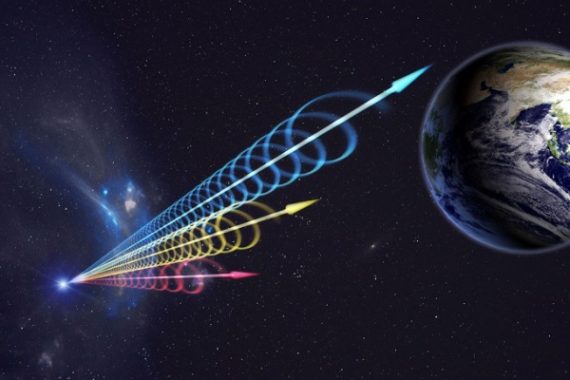 However, a new theory published this month squashes that hope with a bizarre explanation of its own. According to a study published by a team of Chinese astronomers at Nanjing University, fast radio bursts might be the result of “strange star crusts” collapsing in on themselves. These stars are made “strange” by the fact that they are (hypothetically) composed of different arrangements of subatomic particles than typical Earth matter. The authors write that if ‘normal’ (hadronic) matter forms around the ‘strange’ centers of these stars, it can collapse and release burst of energy we detect as fast radio bursts:

Strange stars, which are composed of almost equal numbers of u, d, and s quarks, may be encapsulated by a thin crust of normal hadronic matter. When a strange star accretes matter from its environment, the crust becomes heavier and heavier. It may finally collapse, leading to the release of a large amount of magnetic energy and plenty of electron/positron pairs on a very short timescale.

Of course, as with every new astrophysical theory, plenty of more research will need to be conducted before this one can come anywhere close to being confirmed. Earthlings currently do not possess the instruments necessary to identify the sources of these radio bursts on anything more precise than a galactic level.

While FRBs are a fascinating phenomenon in their own right, I can’t help but wonder about just how far off we might be about their possible origins. Astronomy is one of the oldest sciences, but humankind has always been held back by our pace of technological development. Before telescopes, we thought stars were affixed to a giant “heavenly sphere” and that the Earth was the center of the Universe - and that was just a few hundred years ago. If we manage to not blow ourselves to radioactive dust, think how much we’ll know in a few more hundred years once we truly take to the stars.

Researchers to Hunt for Monster DNA in Loch Ness