It used to be if you wanted to spy on Area 51 you had to drive out to the desert in a 1986 Winnebago with over-sized, conspicuous binoculars and risk life and limb for the smallest breadcrumbs of information.  Not any more. It's the future now, and the wonders of the internet have allowed the common concerned citizen to hop on Google Earth and pore through high definition satellite images of the secretive military base, hoping for traces of extraterrestrial life and alien technology. Now that we have the truth of Area 51 at our fingertips, what do we get? Tentacles. Of course it's tentacles. It was always going to be tentacles.

YouTube channel thirdphaseofmoon uploaded a video on May 20, 2018 showing Google Earth imagery of a location a couple of miles west of Groom Lake and Area 51, in an old bombing range used by  Nellis Air Force Base. What it shows looks straight out of H.P. Lovecraft's nightmares. There appears to be a small hole with long eldritch tendrils reaching out of it, like tree roots or black mycelium. It's weird. It could be absolutely anything, but it's weird.

One thing is missing from the video, however: coordinates. There are no coordinates given. That's a huge red flag for spurious claims like these, so I did my sacred duty and went looking for myself. After longer than I care to admit, I found it. And they say journalism is dead. 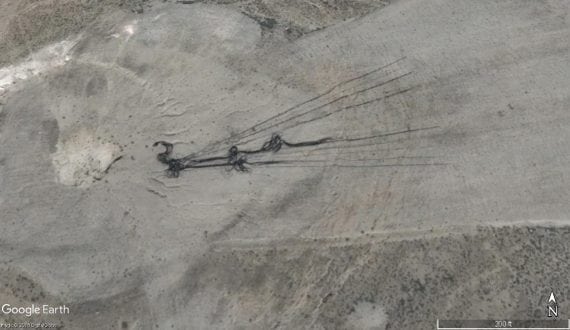 It turns out there are a bunch of weird tentacle holes throughout the area. It is, as stated in the video, a couple of miles west of Area 51 proper, in a current or past bombing range used by Nellis Air Force Base.  There are at least five other strange holes in the area, with the same sort of alien "tentacle" shapes coming out. They are surrounded by craters from bomb tests, and I'd be willing to bet that has a lot to do with it. 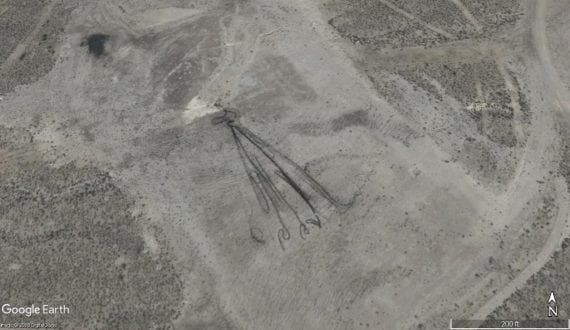 There's a weird almost-symmetry to a lot of these "tentacles," and it definitely has an organic sort of shape. I wonder if it's slightly differently programmed ballistics tests leaving char marks on the ground, or perhaps captured mid-flight, but I'm completely unqualified to make any judgments on that so I'm sticking with what I know—Elder Gods and weird fiction.

Here's a link to the coordinates on Google Earth if you want to check out the area for yourself.

The Daily Star reports that the initial video revealed the secret of Area 51. They clearly haven't read their Lovecraft. If this is indeed the tendrils of the Elder Gods breaking forth from the meekly fragile egg we call Earth—which, at this very location, we've tried to crack with our own feeble attempt to harness the power of the stars—then the knowledge revealed is only our sheer incapacity for knowing and the futility of striving against the violent apathy of the universe.

That is, if you can suspend disbelief that a shadowy military agency—ostensibly entrenched for close to a century in the mass deception of the entire human species to the existence of alien life—would allow Google to show uncensored satellite images of America's most notorious military base. For free. To me.