The Sinister Hungry Ghosts of Japan

There are numerous forms of ghosts in the world, and these can take a vast variety of forms. There are the wandering wraiths, the poltergeists, the revenants, shadows, ghouls, and specters, all subject to the cultural influences thrust upon them. In Japan there is one very curious and unique form of spirit, and that is of the eternally hungry, ravenous ghosts.

One of the more well known of the hungry ghosts of Japan are what are known as the Hidarugami, which roughly translates to “Hungry God.” These are said to be the souls of those who have fallen due to starvation while wandering the remote mountain trails of Japan, dying alone and without any sort of grave or marker for where they fell. Also alternatively called the Hidarutami, the Darashi, and the Daru, depending on the region, in this unfortunate state of affairs these specters are said to have been cursed to seek out others with whom to share their agony and strife in their eternal hunger.

There have long been tales of travelers navigating remote, lonely mountain paths who have found themselves suddenly and overwhelmingly overcome with an insatiable hunger the likes of which they have never experienced. The sensation is reportedly absolutely overwhelming, with the traveler completely incapacitated by an intense hunger they cannot understand. This is often accompanied by an inexplicable fatigue and numbness of the limbs, causing the victim to collapse upon the ground without really comprehending what is going on. If not stopped, these episodes will supposedly almost certainly lead to death or insanity. 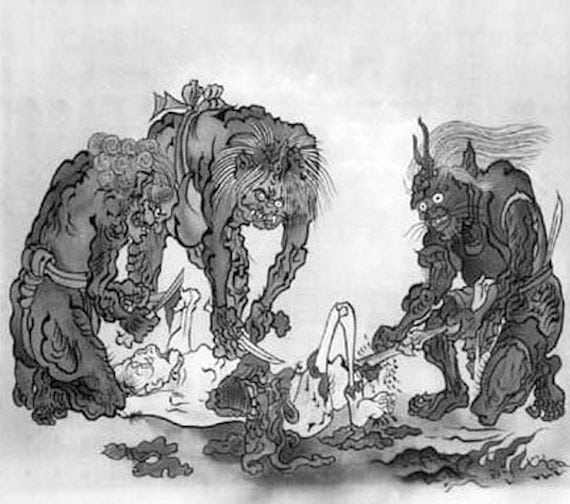 It is said that this is a form of demonic possession being carried out by the restless starving spirits, and that if nothing is done will lead to sure death, after which the victim is doomed to join the roving pack of fellow hungry Hidarugami spirits. According to lore, it is possible to avoid this ominous fate if one is to happen to have handy even a small morsel of food, even a grain of rice, which will purportedly quickly dispel the overwhelming supernatural hunger if one can manage to produce it quickly enough before they are incapacitated. Indeed, this is the very reason why hikers traditionally carry a bit of food at all times in such areas, no matter how short the hike is planned to be. Some traditions, such as those of Shiga prefecture, paint the Hidarugami as more zombie-like in nature, rising up to maim and rip apart anyone who stands too near in order to satisfy their insatiable hunger. Keep those rice balls handy, then.

While this may all seem like mere spooky folklore, there are actually numerous tales of people who have actually confronted these starving spirits. One of the most well-known is that of a man named Senkichi, who was one day found collapsed and exhausted along a secluded mountain trail in 1736. When he was brought to a village and nursed back to health, he related to the villagers a harrowing tale of being mercilessly set upon by the hungry wraiths. In another story from the same era a traveler by the name of Mizuki Shigeru found himself under attack by the nasty specters, which he only managed to just barely escape by grasping at a few grains of rice scattered upon the ground as the evil spirits descended upon him.

Such accounts made warnings of the Hidarugami spirits common in travel guides and maps, which strongly suggested bringing at least a rice ball in the event of a spiritual attack by the ravenous specters. Across rural Japan there have been many legends attributed to these hungry spirits. In Wakayama prefecture there is supposedly a pit deep in the earth near Mt. Okumotori and Mt. Shokumotori, from which the Hidarugami spew forth. Many areas of Japan also offer shrines along mountain paths at which one can pray to keep the spirits at bay. It is widely thought that these stories are merely the personification of the famine and hunger that long plagued rural Japan. Yet the tales persist in isolated areas of the country. Luckily, the Hidarugumi is considered a relatively weak spirit, and can be banished by simply eating something or performing a ceremony to ward off the muenbotoke, or  “unworshipped dead.”

Related to the Higdarugami are the tales of what are known as the vampiric Gaki, also known as the Preta, or the hungry ghosts. Originating from Chinese and Tibetan mythology, these are tormented spirits that are condemned to eternally wander the hellish realm of Gakidō, where suffering in the form of unquenchable thirst and insatiable hunger reign supreme. The Gaki are most often described as looking vaguely humanoid, but with freakishly distended stomachs, oversized heads, and vestigial, seemingly useless mouths, the better to deny them the sustenance they desperately seek. 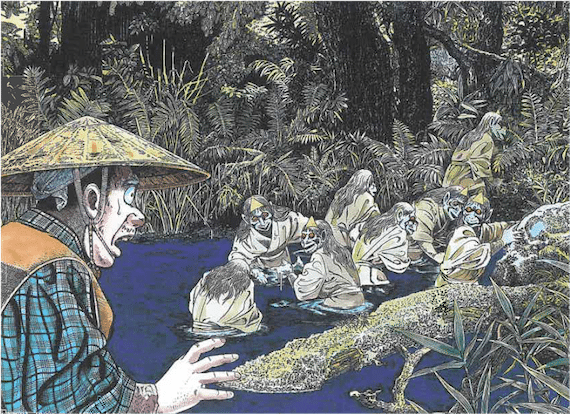 The Gaki are said to be beset with whatever hunger they held when they died, which can run a wide range. The lowest form of Gaki will restlessly seek out the most gruesome of food items, including feces, vomit, corpses, and so on, and many will desperately lick at the smallest drop of blood, but their hunger is never really sated in the slightest. They are considered to be inhabiting a realm just above Hell, called Jigoku in Japanese. When they do find what they are looking for it is said that their meal or drink will instantaneously erupt into fire to leave them in torment, and they are only able to partake of that which has been blessed and consecrated in a special Buddhist ceremony. In many areas there are yearly ceremonies that lay out rice and water to appease the spirits during a ceremony known as Segaki.

Again, there are many reports of encountering these vile spirits, and they are mostly considered to be a type of mischievous poltergeist. There have been priests who have been overwhelmed with the intense suffering and hunger of these entities, but they are luckily easily warded off with certain charms and ceremonies. Interestingly, their name has come to be a colloquial term for misbehaving children, in the form of the colloquial word gaki, which in this case denotes children who suck one’s energy and never seem to be satisfied with what they are offered, sort of like a “brat” in English. These wraiths are known to follow people around and slowly suckle off of their energy, and there is not much to do but call a priest.

There are surely many who would write these off as mere folklore and tall tales. It seems firmly entrenched in the legends of Japan and purely a fictional construct. Yet such entities see various parallels in other cultures as well, and the reports have continued to come in sporadically. Are these stories just the workings of folklore and myth, or is there anything to it all? Whatever one may think, Japan's hungry ghosts continue to allegedly prowl the landscape, seemingly beyond our attempts to understand them.