The Straith Letter: UFOs and a Hoax

Having extensively written about the "Contactee"/"Space Brothers" issue in my 2006 book, On the Trail of the Saucer Spies, and in my 2009 book, Contactees, I quite often get asked what I think about the likes of George Adamski, Dana Howard, Truman Bethurum, Orfeo Angelucci, and the many others who, in the 1950s, claimed face-to-face contact with long-haired aliens from other worlds. I think some of them had legitimate experiences with...something (but definitely not with space-hippies from Venus). Others may have been the victims of early "mind-control" operations. Some were definitely engaged in hoaxing. Others were just plain nuts. But, there is one Contactee-linked affair that I get asked about at least a couple of times a year - an affair that is highly entertaining, but for reasons you might not think. It's a story of how two men hoaxed George Adamski and created something that still circulates among his followers. Well, among at least some of them.

It all began back in 1957 and involved a pair of friends who decided to play a prank on Adamski - which they did. But, it had unforeseen circumstances. That aforementioned pair of friends were Jim Moseley and Gray Barker. Moseley, who died in 2012, is mostly noted for his highly amusing newsletter, Saucer Smear and his 2002 book, Shockingly Close to the Truth, co-written with Karl Pflock, which is hilarious. As for the late Gray Barker, he's noted for having written the first book on the Men in Black (1956's They Knew Too Much About Flying Saucers), as well as the first book on Mothman (The Silver Bridge, which was published in 1970). Both men were notorious pranksters. Barker was someone who played fast and loose with facts - particularly so in his books. And Moseley, at times, would go along with Barker's escapades. All of which brings us to the matter of what went down one night in 1957, and of what became known as the Straith Letter.

At the time, Barker had a friend who, back in the 1950s, was in his late teens. It turns out that the kid's father worked for the U.S. Government, specifically in an office of the Department of State. Barker and the unnamed teenager got talking one day and the kid brought up the fact that he had seen a bunch of unused Department of State-headed paperwork in his father's office. This gave Barker an idea: he asked his friend if he could get his hands on some of that same letter-headed paperwork. So, the next time the kid visited his father's office, he quietly and quickly grabbed a bunch of DoS documents and stealthily got them to Barker. He even provided Barker with Department of State envelopes. It wasn't at all long before the Barker-Moseley caper began.

On one drunken night in Clarksburg, West Virginia - where Barker lived - the two cooked up a plot to hoax Adamski, then the most famous Contactee on the planet. And, having got not photocopies of Department of State-headed paper, but originals, made their plan even easier to con Adamski. Barker started to type. The pair decided they would create a completely fictitious employee of the Department of State. They called him "R.E. Straith," of the "Cultural Affairs Committee." In the letter, the actually-non-existent Straith tells Adamski that he - Straith - and several of his colleagues are right behind Adamski, but cannot publicly provide support for him and his claims of contact with aliens, because of their jobs in the government. And then, Barker and Moseley mailed the letter to Adamski - in one of those Department of State envelopes. Of course, Adamski loved it. Whether he believed the letter to be the real deal, or if he suspected it was a hoax, is a matter we'll never likely know. But, for Adamski, it didn't really matter: this was just what he needed to show to his followers (and his critics too) that he had government support. Which he didn't. Then, things got a bit worrying for Barker. Not so much for Moseley though, who thought it was all great fun. 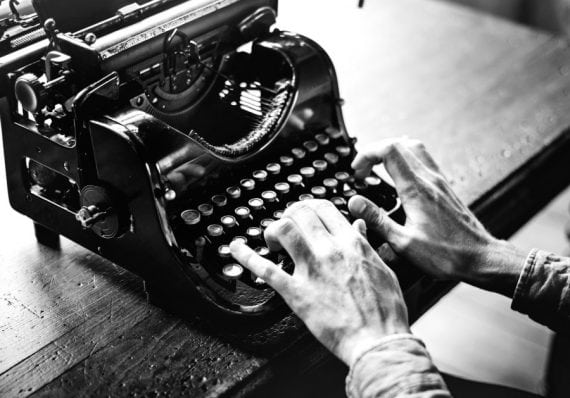 It turns out that Adamski began showing the faked letter to various people in Ufology, and waving it around at lectures. Not only that, a copy of the Straith Letter reached the FBI (maybe even from Adamski himself, who enjoyed mixing things up to his advantage). The G-Men were, unsurprisingly, far from impressed. They quite rightly suspected a hoax and told him to quit all of his foolishness. When word of all this got to Barker, he totally freaked out - and to the point that he actually broke the typewriter into small pieces and, one day, buried the bits and pieces in the fresh cement of a building then being constructed in Clarksburg. Of course, the "cement story" may have been yet another of Barker's jokes, adding even more layers to the legend. But, we know for sure that Barker was deeply worried by the fact that the FBI were now onto a matter than began as a late-night prank put together by a couple of booze-soaked buddies. Barker was even grilled by the FBI, but it came to nothing. Barker never revealed the name of the kid who got the Department of State paperwork - at least, not publicly. He certainly shared the name with Moseley, though, who took it with him to the grave (his name, however, was James Villard). The FBI eventually dropped the matter.

The reason why I mention all of this, is because just last week I was asked about the Straith Letter - yet again - and by someone convinced that it was (and still is) the real deal. It's not! The Straith Letter is the product of two people who liked to screw with the collective minds of Ufology for their own entertainment. And, in this case, they excelled themselves. Far too many people - whose "I want to believe" approach to Ufology has affected their common-sense - see the letter as something notable. But, let's be clear: it's a joke. It was always a joke. And it always will be a joke. Case closed? I dunno. I wouldn't be at all surprised if - in the not too distant future - someone else resurrects the letter and waves it around as evidence that the U.S. Government was secretly supporting George Adamski.