The Strange Demonic Adventures of a Prolific Exorcist

Since time unremembered there have been rumored to be forces from beyond our understanding out to attack, harass, torment, and possess us. As well, just as long as these sinister entities have been around there have been those who would face and confront them, using the power of their faith to battle back the forces of evil. Exorcists have come in many forms and from many walks of life, all trying to keep the power of darkness at bay and becoming the themes of many a horror film. One of the most talked about and prolific of these would be demon hunters has been a man who has become battle weary after doing combat with tens of thousands of the vile entities, and who has brought about himself both followers and controversy.

One man who has made it his mission to confront evil in all of its forms is the Reverend Bob Larson, who began his bold move into the occult as a young budding musician. A guitarist in his younger days back in the 1950s, he began to express concern for the potentially destructive evil influences of rock music, and would even incorporate guitar into his sermons in the 1960s as he tried to convince his congregations of the sinister forces inherit to the music. He would spend much of this era trying to preach the evils of the lyrics, drug use and atrocious, vile behavior of the rock musicians of the day, before launching off into a lucrative career as a radio and television evangelist and author of several books, as well as the eventual head of the Spiritual Freedom Church of Scottsdale, Arizona, in the United States.

In the 1980s and 1990s Larson became known for his heated debates with Satanists, during a time when talk of human sacrifices, devil worship, and dark rituals was rampant, a time known widely as the “Satanic Panic.” Larson would try to convert what he saw as lost souls and bring them over to the light, often without success, but it was during this time when the idea of launching a crusade against demonic forces on earth began to seed within his mind. By the late 1980s he was performing live exorcisms on his weekday call-in radio show Talk Back, and he tried his hand at writing novels that denounced Satan and his forces, such as the novels Abaddon and The Senator's Agenda, and he has gone on to encompass a library of around 33 titles to his name, all about demons and Satan’s influence on the world, including the titles Demon Proofing Prayers and Hell on Earth: A Sobering View On What Satan's Up To.

Larson would also turn his hand to exorcisms after learning of the dire realities of demonic possession during an enlightening trip through Asia, and he would go on to become one of the most prolific and tireless of these warriors against demons there is, claiming at the moment to have carried out over 40,000 such rituals, as well as garnering a reputation as an expert on the occult, supernatural phenomena, and devil worship. According to Larson, his main weapons are his righteous Cross of Deliverance and a Bible, which he claims are adequate weapons against the sinister forces of evil he confronts again and again. The work is often very dangerous and frequently violent, and he has said in an interview with the Sun Online:

You never know when somebody walks in to a room what is going to happen. I have seen a demon leap from one person to another on many occasions. In cases of a husband and wife, or parent and child, the demon will try and jump back and forth between them. I have been assaulted. I had a knife put to my throat once. I had somebody take me by surprise and try and choke me. I even had my ribs broken a few years ago. It all comes with the job of being an exorcist. You are dealing with angry, rage filled violent people. When I'm dealing with a case that I know is going to be particularly violent, I make sure I have an awful lot of people, and an awful lot of angels helping me out.

Larson has traveled all around the United States and abroad as well, notably recording several exorcisms he carried out in Ukraine in 2013, which were covered and actually videotaped by Vice Magazine. He is convinced that the danger of demonic possession is higher than it has ever been before, and to fight it off he has offered various seminars and workshops on how to cast out these voracious demons. He has said of this modern scourge and the efforts he makes to combat it:

I'm doing that almost seven days a week. More people are getting possessed than ever before, but also there is more awareness of this type of thing than their used to be. I'm in touch with other people out there who are involved in this and they're telling me the same thing. It's a new phenomena sweeping the Western world. There are few people who are willing to acknowledge this reality, and fewer still who willing to be interventionist and do something about it. This isn't something that you sign up for at the job centre. it's something you have to be called to. It's my compassion for people who are suffering that motivates me to keep going. On an average day, I see anywhere up to eight or ten clients - and it's not uncommon for one person to need multiple exorcisms in one session. 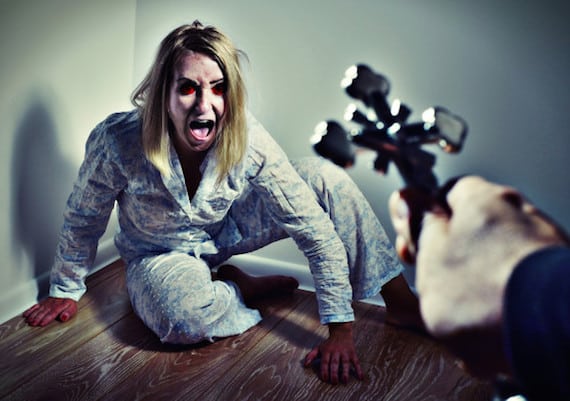 Larson seems to be so committed to his desire to cast out demonic evil from the world that he has turned to the modern age and its technology to help him do it. He is active on social media, and for a modest “donation” you can arrange to have an exorcism over Skype with Larson himself, which goes for around $295. He has achieved a remarkable level of success, widely appearing on such TV shows as Oprah, and even launching his own controversial show called The Real Exorcist. Of course, this level of success has drawn criticism that the undeniably charismatic Larson is only out to make a buck off of gullible suckers. After all, there are his expensive workshops, online courses, Skype sessions, and his own online store, which sells videos, books, and myriad paraphernalia such as replicas of his trusty Cross of Deliverance. There is also the controversy over his statements that gay people invite demons into them more often and that sexual assault survivors, addicts, and alcoholics are among the most possessed, as well as claims that aliens are actually demons. He has said of this:

There are evil spirits who masquerade as aliens to possess people - I come across that all the time. They are not extra terrestrial, they are not from another planet. They are simply from the spirit world that envelops the reality in which we live. These demons will take on whatever form that causes the human condition to be curious about their existence and use that. They appear in different forms in different cultures and aliens is just the latest fascination, particularly in the Western World.

It seems all totally insane and almost absurd, yet for all of the far out theories and controversy Larson still manages to make money hand over fist. Although Larson claims to have cast out countless entities of evil, there are plenty of people who have cast him as a charlatan and scam artist, and he has managed to stir up more than his fair share of controversy, yet there are also many who would embrace what he stands for and what he is doing. Whether Larson is the real deal or not, it shows how pervasive the theme of demonic possession has in popular culture, and if it is not him than someone else will surely step in to fill his place. After all, it seems that demons are a big problem, and big business.

Aliens: Us From A Future Time?