Some people believe that Native Americans got their revenge on European invaders when they introduced the white man to tobacco. While that slow burn may be working, it hides the centuries of use by these indigenous people as a present from their Creator that was used for medicine, religious ceremonies, negotiations and as a special gift with no intention of doing harm. Those native tribes would be shocked to see how vaping has changed the way tobacco is used today. For them, a carved pipe was the smoking tool of choice and a new study of pipes reveals that they date back to about 1685 BCE – nearly 1000 years earlier than previously thought.

In a study published in the Journal of Archeological Science and reviewed in Science, researchers from the University of Alabama, the University of Mississippi and Rhodes College blew the dust off of some artifacts that had uncovered in late 1930s during excavations in northern Alabama after the new Guntersville Dam began flooding Native American sites. The artifacts were sent to the Alabama State Repository and forgotten until recently when members of the Eastern Band of Cherokee Indians pushed for a study of the early use of pipes by Native Americans … and what they were smoking. 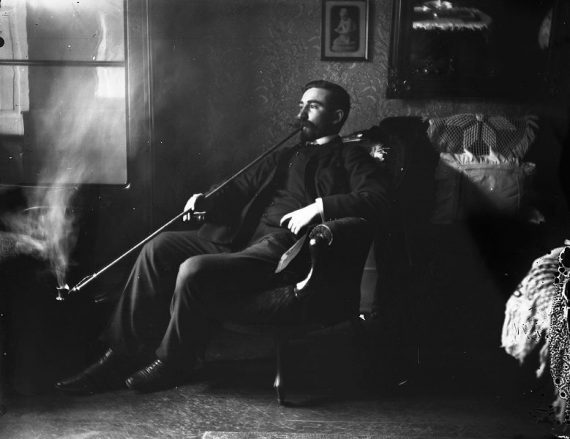 While there’s some evidence that ancient Greeks inhaled natural gases for medicine and inspiration (that explains a lot), smoking of the non-marijuana, non-opium kind was pretty much confined to the Americas prior to the European invasions. Signs of shamanistic smoking have been found in Peru and Ecuador dating back to 5000 BCE, usually in rituals involving inhaling the smoke of dried plants as an incense. Pipes carved from stone, gourds or wood appear first appear thousands of years later in North America and most archeologists dated them and their use with tobacco to around 500 BCE.

That changed with the Alabama pipes. Using mass spectrometry, the researchers identified traces of nicotine in inside a limestone pipe that was found with animal bones dating to between 1685 and 1530 BCE, making it the earliest evidence of tobacco smoking in North America and a strong indication that the smokers had probably domesticated the tobacco plant.

This also predates (in the Americas) the practice of smoking marijuana in a pipe rather than inhaling the smoke of burning plants or eating it. While the Native American shamans also imbibed in psychedelic substances, pipe smoking seemed to be primarily for tobacco. Smokers in the Caribbean, Mexico and Central and South America preferred inserting the tobacco in reeds (an early for of cigarettes) or rolling it in leaves to make cigars.

Then came the Europeans.

Christopher Columbus received dried tobacco leaves as a gift from Native Americans on October 15, 1492. Doctors were soon promoting tobacco as a medicinal cure for everything, including cancer. By the 1600s, Russia banned smoking (that didn’t last long) and Pope Urban VIII pushed to get smoking out of church services (thank goodness for incense). In 1847, Phillip Morris began selling hand rolled Turkish cigarettes. While pipes remained popular with people who had the time to fill, clean and refill them, their use has waned. Although vaping is a somewhat similar process, it’s called an e-cigarette – most likely for marketing to younger users.

Smoking of all types continues to grow in developing countries and still addicts a stubborn minority in the U.S. and Europe. Do Native Americans have the patience to wait for triumph by tobacco?