Getting It On With a Machine

In December 2015, the U.S. edition of The Guardian stated: "Cultural analyst Sherry Turkle warns we’re rapidly approaching a point where: 'We may actually prefer the kinship of machines to relationships with real people and animals.' Certainly we have long had a fascination with these half-women, from The Bionic Woman in the 1970s to Her in 2013, where Joaquin Phoenix fell in love with his computer’s operating system..."

The late Mac Tonnies, who wrote three books - The Cryptoterrestrials, After the Martian Apocalypse, and Illumined Black - had a particular interest in this field. More than a decade ago I interviewed Mac about his growing interest in the field of sex with robots (he died in 2009). And, while going through a box of old files yesterday I stumbled on the Word document of the Q&A for the first time in years. So, I thought I would share it with you today.

It was, Mac told me, Blade Runner that caught his attention and led him to start digging into the world of robot-human sex: ""I saw that movie for the first time in high-school. It had Darryl Hannah playing a robot called Pris, who is described as a ‘pleasure model.’ She’s all punked-out: big-hair, eye-liner, and looks like your typical genetically-engineered hooker. But she's essentially human: she’s an individual. So, the whole idea of having intimate relations with machines began to interest me."

He added: "Most people think of robots as being something clunky and mechanical – something we’re not attracted to on the sexual level. But if we get to the point where science is now heading – where we have very realistic human-like robots – they would bear very little resemblance to the sci-fi image that people have from Star Wars, Star Trek, etc. If you look at the robots in Blade Runner, you’ll see they actually aren’t mechanical at all: they’re genetically engineered. So, in the future we might grow an artificial embryo in a vat and then plug in a computerized brain, into which we’ll download sex-based software."

He speculated on how the phenomenon of human-robot sex might progress: "I think shallow relationships, closed-minded ones, would be the first to suffer if one of the people in the relationship brought a robot home. However, more robust relationships might thrive. It will be the underground, alternative couples that embrace this. The people who might be swingers, who go to sex clubs, or who have three-ways; these would probably be the ones more likely to experiment with robot-sex and make it a part of their sexual lifestyle.”

Mac had more to say, too: "I can easily foresee companies selling themed robots. You’ll have just as many themed robots as there are sexual kinks. Robotic lovers, perhaps complimented by virtual reality, will allow people to live out whatever fantasies they want with surprising realism. Even further ahead, I also think that this sexual revolution will blur the lines of sexuality: gay, lesbian, bi or whatever may become somewhat outdated as people start to experiment with future-sex. 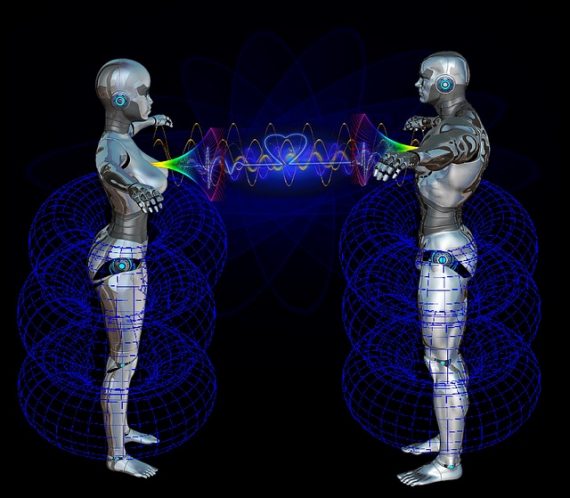 “Some sex-robots might even be reproductions of celebrities: for example, you could go online and have delivered to your front-door a life-like Pamela Anderson robot. And, maybe, for people who are nervous about bringing a real girl into the bedroom, but who are also really curious about trying it, a machine just might work. We’ll probably be able to download different personalities into our sex-robots, too: kind of like switching avatars in an online chat-room."

Mac also addressed the matter of our sex-machines becoming intelligent. He said: "Right now, we program our machines to work for us. They don’t have intelligence. But it’s only a matter of time before we develop robots that think for themselves and become individual, living beings. The only difference is that whereas we are carbon-based, they will be synthetic: grown instead of born. When that happens, everything changes. We might even see the robots refusing to have sex with us, and just wanting to have sex with each other. But on the other hand, knowing that we are having sex with a machine that has intelligence – rather than just with a mindless, blow-up doll – might be a turn-on for both us and them."

Mac concluded: "Religious groups will probably see this as an affront to humanity. But there are people out there who will pay handsomely to have sex with machines, if they are sufficiently human-like. I don’t think it denigrates the human condition. After all, we’re lusty creatures. And it’s not terribly offensive. At first, it might be seen as being that way. But when they begin to look and act like us, it will be no big deal to say: 'My girlfriend’s a robot.'"

As someone who used to regularly write features for Penthouse, who promoted (for the now-defunct DFW Nites) strip-clubs in the Dallas-Fort Worth area, and who doesn't have any hang-ups, I don't see any harm in this at all. But, personally, I'll stick to real women. Of course, fifty years from now, my preference might very well be seen as outmoded. Completely redundant, even!

The Perfect Human Body May Look Like an Extraterrestrial