Demonic possession seems to be on the rise around the world and with it comes an increased demand for exorcisms. The Catholic Church is addressing this need by training more exorcists and those classes are now open to non-priests and non-males (that would be women). While the Church still only allows trained priests to perform the actual exorcism, these ‘auxiliary exorcists’ can do other tasks like assist in the ceremony and provide comfort to the possessed. Even though they don’t do the casting out, this can still be a dangerous job as one man in England found out recently when he was involved in the exorcism of a private home and ended up being followed by the demon – the 7-foot ghost of a circus ringmaster who ruined his physical and mental health and attacked his girlfriend … make that ex-girlfriend, who may not return even if the exorcist gets his own exorcism. Would this make a good movie plot?

It’s already the main story on an episode of “True Horror” on Britain’s Channel 4. Ed Booker doesn’t say if he’s taken a certified exorcism class but he claims his lifelong interest in the supernatural drew him to join a ghost-hunting group that investigates and then allegedly exorcises ghosts and demons from buildings. That’s how he ended up in a house in Horsham, West Sussex, where a teen and his friends turned in a ghost report.

“We didn’t like it as soon as we walked through the front door. Even the sceptics in the group didn’t want to go in.”

That could be said of the bedrooms of most teenage boys, but Ed was not afraid of the piles of dirty clothes but of the negative energy from the spirits which he and his cohorts said they felt.

“Then this figure came up in the middle of us - I can only describe it as a circus ringmaster, dressed all in black with a big top hat and a shovel on its shoulder. It was just staring at us with a grin full of dirty, broken teeth. It was an awful experience really.”

A circus ringmaster with a shovel? Perhaps the spirit was angry because the clown ghosts weren’t shoveling up the plops of the elephant ghosts. Ed doesn’t say how he rid the house of the ghost, but the end result was a happy teenager and an exorcist’s worst nightmare … the spirit became attached to him.

“This ghost is ruining my life. My ex was attacked and pinned down. I’ve had mediums come in and they’ve been attacked too.”

After chasing out his girlfriend, the ghost has apparently moved into Ed’s house, where he claims it has scratched him, written “DIE” on a mirror (note to self: come up with a better demonic message for the movie script) and appeared to both Ed (he claims to have photographed it) and some of his friends. If there’s a bright side, it seems the ringmaster ghost is a homebody.

“I’m always depressed; once I get out of the house I perk up but my mood drops as soon as I go back in.”

If Ed really is a trained exorcist, he should be able to perform a simple exorcism (one not requiring a priest) on his possessed house by calling upon God to remove the ghost or demon from the building. If it’s Ed who is possessed, that eliminates an exorcism since he’s not a priest. Barri Ghai, founder of the Ghostfinder Paranormal Society, thinks Ed needs a professional.

“Demons are there to ruin your life – he will be tormented by it, made to fear it. Demonic entities are tough to get rid of. It sounds like he needs an exorcism himself.” 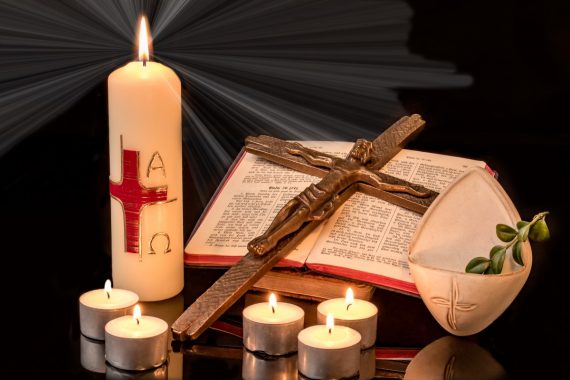 Believe it or not, exorcisms can now be done over a cellphone. All Ed needs to do is facetime with a certified exorcist. Then he can take a no-more-ghosts selfie and send it to his ex-girlfriend.

It’s a good story but is it enough for a movie? Maybe if the cellphone used by the exorcist gets possessed by the ringmaster and starts sending X-rated photos to the wives of prominent world leaders …