Green Gems are Falling from the Sky over the Kilauea Volcano

Some people might say that living in Hawaii is a gift in itself. Those people are probably not living in the path of the lava flowing from the Kilauea volcano on the Big Island, which is demolishing everything in its path, including vaporizing water in the ocean. Those who believe that Kilauea is the home of Pele, the fire goddess of Hawaiian folklore, may blame this on profiteers stealing the volcano’s thermal heat or tourists stealing Kilauea’s lava rocks. For those people, Pele may be compensating with a gift of her own … green gemstones falling from the sky. Is this a Pele payday? 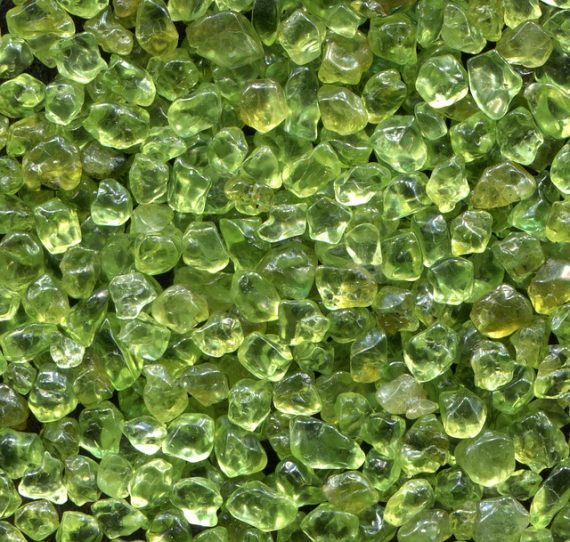 “It is literally raining gems. Nature is truly amazing.”

Meteorologist Erin Jordan lives in Tuscon, Arizona – a long way from Hawaii – but she has friends there who sent pictures of the stones which she tweeted with an explanation that the shiny green crystals are olivine, a magnesium iron silicate with the formula (Mg2+, Fe2+)2SiO4. While it’s a gift from Kilauea in Hawaii, those who can’t afford a trip there might try Norway, where 50 % of the world's industrial olivine in mined. In fact, olivine is a fairly common mineral on and in the ground, but separate large crystals falling from the sky is pretty unusual, according to minerals.net.

“Despite this, good specimens and large crystals are uncommon and sought after. Only few localities yield large examples of this mineral, although small and microscopic grains are found worldwide. Olivine is also found in meteorites, and large grains have been reported in many of them.”

Popular Mechanics reports that the falling crystals over Kilauea are inside the lava erupting into the sky. As the lava cools, it hardens into pumice -- that porous rock commonly used as an abrasive for pedicures and in the production of stone-washed jeans. (Pele must be so proud.) Being full of holes and fairly lightweight, the pumice falls slowly, allowing the olivine crystals to drop out of the holes and fall separately.

Are these falling olivine stones really a gift from Pele? Possibly. Depending on the quality and size, it's used as a gemstone called peridot or chrysolithe. However, it may actually be a present to the entire world. Olivine grains can be used to sequester or store atmospheric carbon dioxide, the nastiest of the greenhouse gasses, and slow down global warming by breaking down the CO2 as it weathers.

Sending the olivine rain to save the planet may be Pele’s real message to humanity … as long as humanity leaves the stones in Hawaii. It’s illegal to remove the gems – whether jewelry-sized or the sandy crystals that make up Hawaii’s green beaches. It would be just your luck to get caught picking up a peridot and placed in a jail that is suddenly in the path of a fast-moving lava flow just as the jailer loses the key to your cell.

It’s not nice to mess with the goddess of fire.

A High-Altitude Dust Particle and the Origin of Everything