In just the past few weeks, a man in Texas was bitten and required copious amounts of anti-venom when he picked up the head of a rattlesnake he had beheaded with a shovel long after he assumed it was dead and a woman in Indonesia was swallowed whole by a 23-foot python. Ignoring that news and other warnings that you shouldn’t mess with snakes, a man in Alabama was attacked by the headless body of a snake he had killed an hour before. All together now … DON’T MESS WITH SNAKES!

“According to Kerry Forbus, her husband, Billy Forbus, was plowing his garden when he saw the snake against a fence. She brought him a shotgun, which he then used to shoot off the snake's head.” 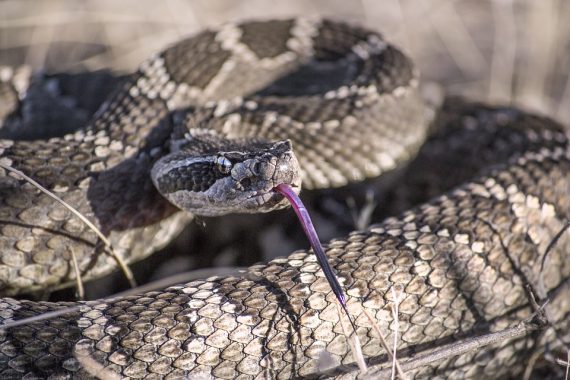 WSFA 12 News in Montgomery, Alabama, reported that the incident occurred on June 2nd. After Forbus shot what appears to be a rattlesnake (the type doesn’t matter … don’t mess with them), he says he left it for an hour before picking it up with “grabber” and placing its apparently lifeless body in the bed of his pickup truck. As he attempted to stretch it out to take a picture, the headless snake lunged at him a number of times. Instead of putting this poor creature out of its misery, he called his wife to take a video of him toying with it again. (See the video here.)

"We took the video to let people know to be careful even after you have shot and killed a snake. This whole thing was a preventative measure."

Right. Forbus posted this comment after feeling the backlash and being chastised by Tyler Harris, animal care coordinator of the Alabama Wildlife Federation, who quoted veterinarian Adam Cooner:

"The spinal cord can function, to a degree, autonomously from the brain. That explains why the rattlesnake in the video is still writhing and moving despite the head being in less-than-ideal condition … The snake is probably conscious and in agony."

This might explain why most stories of encounters with headless creatures turn out badly. Brazilians tell the tale of mula sem cabeça -- the ghost of a woman which appears as a headless mule with fire spewing from its neck – that tramples anyone who gets in its way. The Irish fear the Dullahan – a headless horseman with a headless horse whose coach is filled with skulls and whose whip will lash out the eyes of anyone who sees him. If his headless horse is anything like the mula sem cabeça, it’s probably wise to avoid it as well. Then there’s the deadly detached-head/headless-body combo threat of the nukekubi, a Japanese legend about an ordinary person by day whose head flies off at night to eat flesh (nukekubi mean “prowling head”). The head can’t be killed so one must find the headless body and kill it instead – probably being careful it doesn’t lunge at you first.

Which brings us back to the headless snake. Snakes, regardless of size or venom, share a common trait – they generally leave if left alone. If your work or activity takes you into snake territory, wear boots, walk carefully and give them time to get out of your way. And remember: