The merman, while often underrated among his more bombastic mythological brethren, nonetheless remains one of our most enduring mythical tropes. From the ancient Semitic fertility god Dagon to the Babylonian tales of fishlike people called Oannes (which became popular among ancient astronaut theorists as being evidence of early human paleo contact with extraterrestrials), fishlike humanoids have been a consistent part of mythology since the literal dawn of civilization.

As a child growing up, I was fortunate to have parents who encouraged an interest in the arts, and this included being passed down copies of Edith Hamilton’s Mythology: Timeless Tales of Gods and Heroes, as well as early introductions to the work of Carl Jung and Joseph Campbell, in relation to the power of mythology and symbolism throughout human history.

There were other places I became exposed to mythology and symbolism though, as is often the case among young boys growing up in America: these came in the form of characters portrayed in comics and video games. One of the merman-like forms I recall in particular had been a fish-man-monster from the famous Final Fantasy series called the “sahag.” 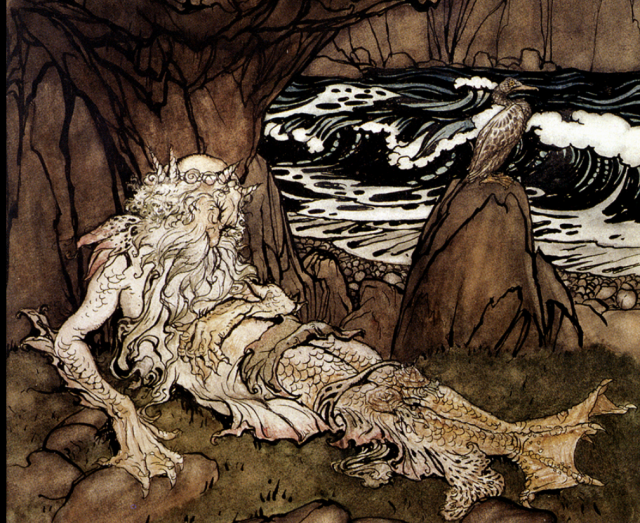 At some point back in 2015 (partially at the prompting by a publisher of mine looking for an essay on such unusual mythological characters), I was prompted to investigate the origins of the sahag, since the creature bore no similarity (in name, at least) to any mythological studies from years past. As I would come to learn, this particular fish-monster was a derivative from the earlier Sahuagin, a fictional variety of intelligent, but aggressive mermen created by Steve Marsh for the popular Dungeons and Dragons game a number of decades ago, inspired by DC Comics characters represented in the popular Justice League series, of whom Aquaman was a member (it is worth noting the comparison between this DC character, first appearing in 1941, with the Marvel Comics character Namor the Submariner, who first appeared in print two years earlier).

Part of the curious history of mermen and fish people in folklore and mythology also has to do with their alleged appearance in the context of historical accounts. For instance, in 1546, a creature was recovered off the coast of Denmark that was said to resemble “a monk draped in his loose robe,” according to those who discovered the creature. In his Historia Animalium, Swiss Naturalist Conrad Gesner noted a similar recollection of such a creature’s capture, attributed to philosopher Anicius Boethius; Gesner further recounted sightings of a monk-like “fish” in Poland’s coastal waters in 1531. Guillaume du Bartas chronicled the Polish merman incident in his La Sepmaine; ou, Creation du monde, saying that, “very fishes living in the Seas… The mytred Bishop and the cowled Fryer; Whereof, examples, (but a few years since) Were shew'n the Norways, and Polonian Prince.”

The incident du Bartas describes, while notable among such accounts, describes that the so-called “monkfish” was observed at a fair distance; this alone should present ample cause for caution in its treatment as a genuine curiosity, rather than a simple misidentification.

By the middle of the nineteenth century, Danish zoologist Japetus Steenstrup had proposed a novel theory about the so-called seamonk: that this creature, and earlier tales of the mythical kraken, might have a common lineage in misrepresented retellings of giant squid encounters; a similar idea has been championed by writer Richard Ellis. The late Bernard Heuvelmans also weighed in on the matter of the seamonk, suggesting the oceanic beast might have simply been a walrus.

Perhaps most promising among the alternatives, however, involves the literal usage of the name “monkfish” and similar derivatives in parts of Scandinavia, which has been attributed to a creature called the angel shark. It is a species that, despite its name, is actually more akin to a skate. (Note here that the name “monkfish” is also used for a fish found in the North Sea areas, which is a variety of anglerfish of the genus Lophius; though also referred to as “monkfish”, their flattened heads and otherwise ominous appearance have also inspired names such as “frogfish” and “sea devil”).

The theory of the angel shark bears unusual promise, as we know that the protuberance of the skate’s nostrils, especially in relation to the less prominent appearance of the eyes, may have first inspired sailors to trim away parts of a skate in order to create the appearance of a more anthropomorphic creature, dubbed the “Jenny Hanivers.” Fishermen who dried them carved the humanlike traits into the remains, and then preserved them in a varnish so that they might be sold as souvenirs. It was Gesner, in fact, who as far back as 1558 noted these “creatures” were in fact merely skates, and not the dragons they were so often promoted as being. Thus, it becomes hard to argue against the notion that misconceptions and misattributions might constitute the larger majority of sightings… at least in the cases where outright hoaxes weren’t already evident.

Whether they had been revealed as hoaxes or taken for being simple misattributions, the stories mer-folk haven’t seemed to last the test of time like some of their cryptozoological kindred. Nonetheless, they are a unique and entertaining part of folklore from around the world, and one which beckons to us from the recesses of the mind, as well as the ocean depths.

UFO Filmed Hovering Next to ‘Portal’ During Electrical Storm