Although the U.S. Navy's records on acclaimed Beat-writer Jack Kerouac certainly cannot be considered as "top secret files," they still make for fascinating reading, and provide a great deal of information on his life and his character. For those who don't know (and surely there can't be many), Kerouac was born in Lowell, Massachusetts back in 1922. He attended both Catholic and public schools, and earned himself a football scholarship to Columbia University, New York City, where he mixed with Allen Ginsberg, and William S. Burroughs. It wasn't long, however, before Kerouac headed off for pastures new: he joined the United States Merchant Marines.

As a result of his new plans, we get to learn a great deal about one of the United States' greatest writers, whose life was tragically cut short in 1969, at the age of forty-seven, from a long-lasting, serious booze addiction. We'll begin with a 1943 dossier on Kerouac - when he was twenty-one - which was captioned: "John Louis Kerouac Admitted from U.S. Naval Hospital, Newport, R.I., 'Constitutional Psychopathic State.'" In part, we are told:

"A review of this patient’s health record reveals that at recruit examination he was recognized as sufficiently abnormal to warrant trial duty status, and that during this period, neuropsychiatric examination disclosed auditory hallucinations, ideas and reference of suicide, and a rambling, grandiose, philosophical manner. At the Naval Hospital this patient appeared to be restless, apathetic, seclusive [sic] and described experiences which were interpreted to be visual and auditory hallucinations. The diagnosis Dementia Praecox was established and upon the approved recommendation of a Board of Medical Survey, the patient was transferred to this hospital, arriving here on May 20, 1943."

The Navy documents do not end there. Not at all. We have barely begun. We also learn the following from the doctors: As a result of what were described as "visual and auditory hallucinations," a careful study of Kerouac’s character was conducted while he was in the care of the Navy’s medical experts. Interestingly, Kerouac was quick to deny assertions that he was suffering from such hallucinations, asserting that they were merely “echo effects in his mind of conversations he had had previously.” The Navy’s records continued to paint a portrait of Kerouac:

"According to the patient, he had made a very poor adjustment in school and in work. He impulsively left school because he felt too stilted and held back in there. Without any particular training or background, this patient, just prior to his enlistment, enthusiastically embarked upon the writing of novels. He sees nothing unusual in this activity. Physical and neurological examinations are negative and mental examination reveals no gross evidence of psychosis."

The following document also demonstrates much about Kerouac's mindset: "On May 20, 1943, an updated summary of the Navy’s medical assessment of Kerouac was prepared, after it had become abundantly clear that Kerouac and the Navy were destined to part ways in the very near future: "The patient was readmitted 4-2-43 to the sick list at the U.S. Naval Training Station, Newport, RI, because at recruitment he exhibited vague, disconnected thoughts. He has been fired from every job he had except newspaper reporting. The latter was for a small paper at $15 per week, which he quit. He has been discharged from steamship job, garage job and waiter job. He is irresponsible not caring. He found it difficult to adjust to the recruit-training program 'because of the regimentation and discipline.'"

The Navy added: "At a Staff Conference on June 2, 1943, the diagnosis was changed to Constitutional Psychopathic State, Schizoid Personality, it being unanimously agreed that this patient has shown strong schizoid trends which have bordered upon but which have not yet reached the level of psychosis, but which render him unfit for service. His discharge from service is recommended. This patient is considered fully competent to be discharged into his own custody. He is not considered to be a menace to himself or to others and is not likely to become a public charge."

In an interview with Naval staff, Kerouac grudgingly admitted the following:, “I get nervous in an emotional way but I’m not nervous enough to get a discharge. I don’t hear voices talking to me from nowhere but I have a photographic picture before my eyes; when I go to sleep and I hear music playing. I know I shouldn’t have told the psychiatrist that, but I wanted to be frank.”

The Navy also turned their attentions to Kerouac's family: "Patient’s father, Leo A. Kerouac, states that his son has been 'boiling' for a long time. Has always been seclusive, stubborn, head strong, resentful of authority and advice, being unreliable, unstable and undependable…Feels that he has improved. His nervousness had decreased. The first impression that the doctors got of him was incorrect, he states, for he did not take them seriously. Likes the sea and will join the Merchant Marine if he can get out of the Navy…Interested in world affairs and political theory. Is gregarious. Has many boy friends. Mother believes him heterosexual but interest in girls shallow. Broods when unhappy or lonely."

The papers continue: "Father, French-Canadian birth, living and well, works as a printer, and has always been a pal of the patient’s – 'more like a big brother.' He has worked as a printer most of his life. During the depression years, was on WPA for a time. In 1941, lost his job because his employers wanted him to send his boy to Boston College whereas the boy had already registered at Columbia University. Since then has obtained other satisfactory employment but according to the patient the father feels that the whole town is 'against' the family.

"Mother, 48, living and well, closely attached to patient. Also French-Canadian by birth. Sister, 24, divorced just recently joined the WAAC’s. At 18 she married a man of 30 but divorced him after one year. Because of this she was considered the 'black sheep' of the family. Patient remarks that in years past he was the favored child but that recently his role has been reversed so that he is now looked upon as the 'black sheep.' Habits: Enjoys reading and writing. He did enjoy athletics very much and practiced regularly. More recently however is chiefly interested in writing. No drug habits. Has drunken sprees once a twice a year lasting about one week."

The Navy knew, too, all about Kerouac's background in the field of writing: "Patient describes his writing ambitions. He has written several novels, one when he was quite young, another just prior to joining the service, and one he is writing now. Patient states he believes he might have been nervous when in boot camp because he had been working too hard just prior to induction. He had been writing a novel, in the style of James Joyce, about his own hometown, and averaging approximately 16 hours daily in an effort to get it down. This was an experiment and he doesn’t intend to publish. At present he is writing a novel about his experiences in the Merchant Marine. Patient is very vague in describing all these activities. There seems to be an artistic factor in his thinking when discussing his theories of writing and philosophy. Patient believes he quit football for same reason he couldn’t get along in Navy, he can’t stand regulations, etc."

Finally, in June 1943, the Navy reached its conclusion on Kerouac: "He is considered unfit for the service and his discharge is recommended." 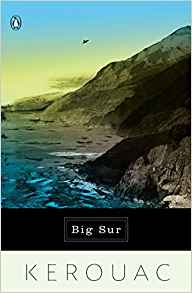 In Big Sur (my favorite of all his books) Kerouac wrote: "My work comprises one vast book like Proust’s except that my remembrances are written on the run instead of afterwards in a sick bed. Because of the objections of my early publishers I was not allowed to use the same personae names in each work. On the Road, The Subterraneans, The Dharma Bums, Doctor Sax, Maggie Cassidy, Tristessa, Desolation Angels, Visions of Cody and the others including this book Big Sur are just chapters in the whole work which I call The Duluoz Legend. In my old age, I intend to collect all my work and reinsert my pantheon of uniform names, leave the long shelf of books there, and die happy."

Indonesian Woman Meets 23-Foot Python and Only One Survives