In the late spring and early summer, Jupiter is one of the most prominent objects appearing in the night sky. Appearing vivid and bright on any clear evening, it rises in the east and follows a westerly course throughout the nighttime hours, receding beyond the horizon to the west prior to dawn.

Stargazing apps will find it easily, although the casual observer can hardly miss Jupiter's bright, off-white appearance (as an added tip, remember when looking for planets that you can spot them easily not only due to their brightness, but the lack of sparkling scintillation stars have from being a greater distance away). And while Jupiter is one of the most impressive features in the night sky, it is bright enough that it can occasionally be viewed even in daylight, if one knows where to look.

Some keen observers have also claimed to be able to see Jupiter's moons with the naked eye, a claim which, admittedly, would require near perfect visible conditions (and extremely good vision). Nonetheless, observation through a telescope is far more lucrative, allowing the Galilean satellites to become easily discernible as points of light gleaming like a pearl necklace encircling the planet system's greater body.

Over the years, a number of unique observations have been made of Jupiter's moons. For instance, in the late 1970s W.E. Fox was first to write about the strange appearance of double shadows cast by Jupiter's moons onto the planet's surface when passing between it and the sun; in some instances, even triple shadows were observed. Fox discussed these anomalous shadows in an article for the British Astronomical Association Journal in 1978 while offering no explanation for this mystery.

The shadows cast onto Jupiter's surface are not the only mysteries associated with Jupiter's moons. Of all the planet's natural satellites, Io may be the most intriguing (seen passing before Jupiter in the photo at the top of this post, as seen from the Cassini probe in 2001), due to an unusual illuminative phenomenon it produces in the minutes following a planetary eclipse. Specifically, for an estimated 15 minutes after the eclipse occurs, Io appears brighter after emerging from the shadow of Jupiter. 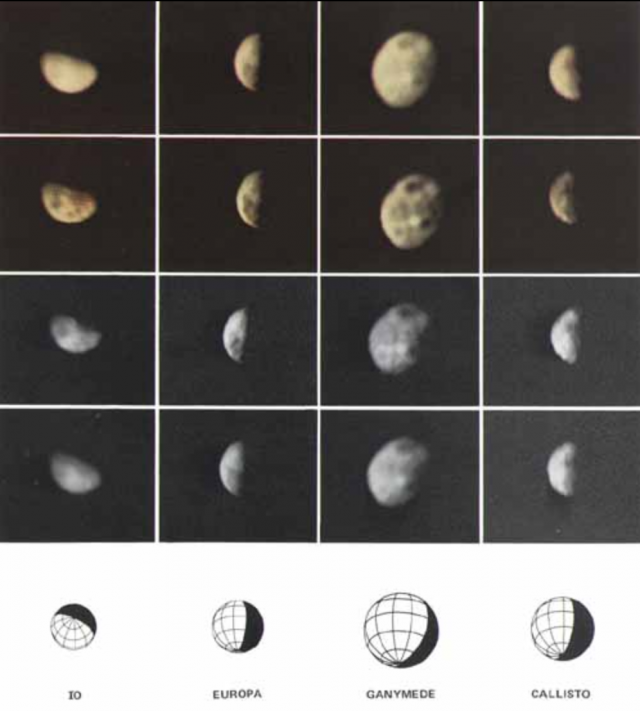 Writing for the journal Icarus in 1973, astronomers D.P.Cruikshank and Robert Murphy reported on the phenomenon, noting that, "A post-eclipse anomaly of approximately 0.07 mag was observed on two occasions in 1972, while observations of Europa and Ganymede showed no brightness anomaly greater than 0.01 mag." While a variety of possible causes are reviewed, Cruikshank and Murphy note that, "The observational data and the results from a stellar occultation are in general accord with the theoretical predictions of the stability of heavy gases on Io, while both observational and theoretical criteria are satisfied by a tenuous atmosphere of a heavy gas such as methane or ammonia having a surface pressure ∼10−7 bar."

There are other theories about Io's post-eclipse radiance, one suggesting that a "thermoluminescent effect" may be in the works, occurring when Jupiter's atmosphere excites Io's terrain that is suddenly heated as it emerges from the shadow, causing a temporary brightening. Another idea involves sulfurous frost that coats darker areas of the moon while shielded from the sunlight, which cause the surface to become more reflective as the satellite emerges from Jupiter's shadow.

Another anomalous phenomenon associated with Io involves the violent volcanic eruptions it hosts, which are known to eject molten material as high as 250 kilometers. Astronomers and physicists have long wondered about whether there could be an explanation for these violent outbursts, and an intriguing theory was proposed in 1979 by Cornell astrophysicist Thomas Gold, who suggested that the Jovian moon's volcanic activity might actually have its basis in electricity.

According to Gold, Io in its orbit occasionally "short circuits" the current of Jupiter's ring system (that's right, Jupiter has rings, although they are far fainter than those of other planets, most notably Saturn). Gold estimated that Io, when passing through the ring current, could attain an electrical current nearing 5 million amperes, resulting in eruptions on the planet that are actually electrical arcing, rather than purely the result of subsurface heat and pressure.

Jupiter's prevalence in the night sky is only some of the reasons the planet continues to fascinate us. However, as we see here, a deeper look at its moons (and their unusual mechanics in relation to Jupiter itself) reminds us that there are still many mysteries about our universe we have yet to unravel.

A Tale of an Exploding UFO Implodes