Man Rises From Tomb After 3 Days (No, Not THAT One)

A man in Tasmania was buried alive in a tomb underneath a busy street with no food and emerged three days later seemingly none worse for the wear. Before you start screaming about blasphemy, he had a noble cause and, while he emerged on a Sunday, no religion was involved … although near the end he may have prayed for some Vegemite on toast.

“It is a story that is not well known, but is ever-present, just beneath the surface of our contemporary culture. The fact that Mike Parr’s work will happen underground, just out of sight, as everyday life continues above it, is clearly no coincidence.”

Before getting into THAT story, news.com.au first details the story of 73-year-old Australian performance artist Mike Parr. As part of Hobart’s Dark Mofo festival, Parr presented “Underneath the Bitumen the Artist.” With permission and cooperation from city officials (he was turned down by at least two other municipalities) and money from the festival sponsors, Parr had a large hole dug under Macquarie Street, a busy avenue in Hobart. A large metal container containing Parr, water, waste containers, a bed, pads and pencils, an air hose and a copy of Robert Hughes’ “The Fatal Shore” (was he buried alive or checking into an underground hotel?) was lowered into the hole and covered with (did you read the name of the exhibit?) bitumen – the old name for asphalt. (Plenty of photographs and video here.) 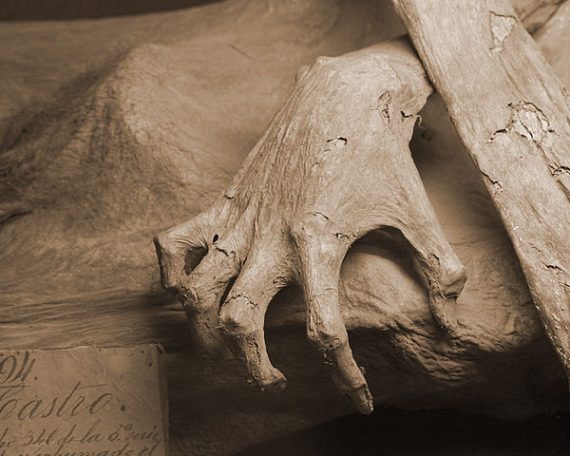 “The eventual transportation of 75,000 British and Irish convicts in the first half of the 19th century, and the subsequent, nearly total destruction of Tasmania’s Aboriginal population. To my knowledge, it will be Tasmania’s first monument referencing both the Black War and The Convict System, because the abysmal treatment of the indigenous people and the extreme violence of the punishment meted out to the convicts are two sides of the same coin.”

(Spoiler alert!) When Parr was lifted alive from the tomb 72 hours after being sealed in, the container was covered with cement as a memorial time capsule of those two tragic events in Tasmanian history.

Seventy-two hours. Is that a record for being somewhat buried alive? Not by a long shot. In 2004, Czech magician Zdenek Zahradka, who was also known as Fakir Ben Ghan, spent 10 days buried alive in a coffin with air but no food or water like that buried-alive faker Mike Parr. Fifty at the time, he lost 8.5 kg (19 pounds) during the ordeal and spent his time meditating … possibly about Czech sausages. The Guinness people recognized this as a world record but stopped accepting new challenges. Apparently that news didn’t get to Sri Lanka where, in 2012, 24-year-old Janaka Basnayake had himself placed in a wooden container and buried 10 feet deep … only to be dug up 6-and-a-half hours later dead.

Kids … even if you think you’re a vampire and have the cool tattoos, black clothes and fake teeth to prove it … don’t try this at home.

Dulce’s Underground Alien Base: Real Or Not?