Supermassive black holes are can be found at the centers of nearly all the galaxies known to astronomers. It’s still not known why these black holes are found in the hearts of galaxies, but it’s theorized that they may be created after the explosions of massive stars which ‘seed’ new galaxies with various types of matter and star stuff. According to NASA, the center of our own Milky Way Galaxy contains thousands of black holes weighing up to 30 times more than the mass of our own Sun, all of which are found just a few light years from the largest and most central of the Milky Way’s black holes, Sagittarius A*.

Astronomers at the Keck Observatory in Hawaii were analyzing 12 years of data gathered on these black holes when they came across what have been described as “several bizarre objects at the Galactic center” which are “concealing their true identity behind a smoke screen of dust.” They display an unusual level of what astronomers call “puffiness,” meaning whatever they are, they’re cloaked in dense layers of gases and dusts. If they are stars, these clouds are so thick that they prevent them from being observed directly. What exactly might these anomalous objects be? 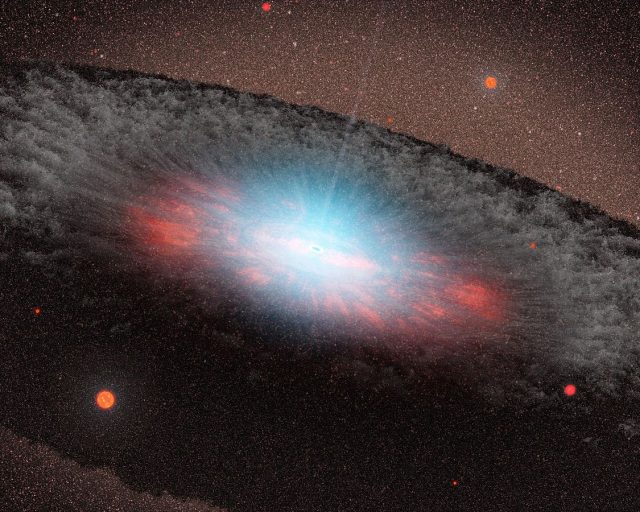 For now, that remains a mystery. Astronomers say these objects resemble clouds of gasses, but behave more like stars. UCLA postdoctoral scholar Anna Ciurlo led the study and says that these objects still perplex her team despite more than a decade of research:

These compact dusty stellar objects move extremely fast and close to our Galaxy’s supermassive black hole. It is fascinating to watch them move from year to year. How did they get there? And what will they become? They must have an interesting story to tell.

One theory is that these objects might be the remnants of binary star systems which crashed into one another due to the gravitational influence of nearby black holes. Further study will take decades, however, due to their slow rate of evolution.

This discovery comes on the heels of several other recent astronomical breakthroughs which show there might be entire classes of strange phenomena and wondrous objects found in the far reaches of space the likes of which we have never seen. It truly is a mysterious universe.