The Overtoun Bridge spans the Overtoun Burn (stream) in the village of Milton near Dumbarton in West Dunbartonshire, Scotland. Above the bridge is Overtoun House, a stately 19th-century country house which has also been a maternity hospital, a mission and a movie set. Below the bridge are dead dogs. Wait, what?

Reports dating back to the 1950s claim that as many as 600 dogs have mysteriously leapt from the Overtoun Bridge and fallen 50 feet to the shallow waters below. At least 50 have died and many of the rest were crippled for life. Studies have found that dogs are most often long-nosed breeds like German Shepherds and Scottish Terriers, jump on clear days and only from one side of the bridge. While it’s not believed that animals can be suicidal (there have been isolated instances of cows leaping off cliffs, but the reason is usually a predator), that was the accepted cause until 2005 when canine psychologist Dr. David Sands claimed the dogs were driven to jump by the strong odor of male mink urine from nests below.

“With new evidence gathered from teams of psychics, ghost hunters and dowsers who carried out research at the bridge, a new picture of Overtoun is emerging: a supernatural one.”

Supernatural! Now that sounds like a better and much more interesting explanation. In his new book, “The Baron of Rainbow Bridge: Overtoun’s Death Leaping Dog Mystery Unraveled,” Scottish author Paul Owens details his investigation of not just the Overtoun Bridge but the entire area surrounding it and Overtoun House. Owens has been a teacher of Philosophy and Religion and is currently a member of The Scottish Society of Psychical Research. 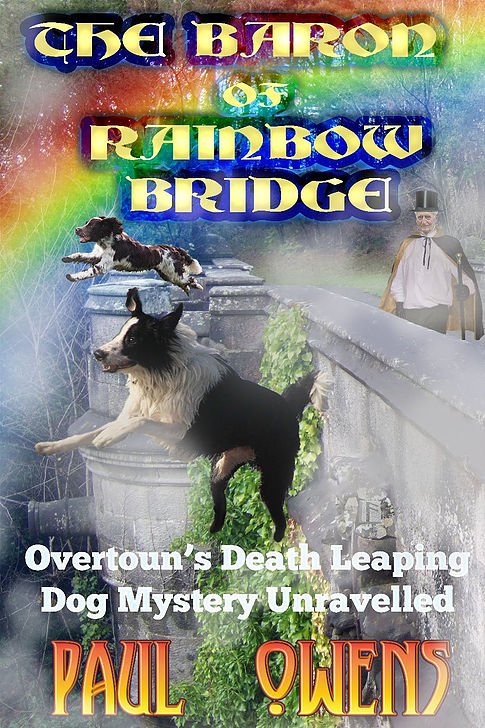 According to his website, Owens spent eight years researching the bridge and the alleged canine suicides, interviewing dog owners as well as historians and paranormal experts. From that research, he believes that the bridge is a so-called “thin place” where spirits communicate with the living and, in this case, the living dogs. But why are they being driven to jump? Owens proposes that one of the spirits may be a ubiquitous White Lady ghost linked to some tragedy.

A more interesting idea is that the bridge may have been cursed by John White, the 1st Baron Overtoun who inherited the estate in 1891 and oversaw the building of the bridge. He was the owner of the Shawfield Chemical Works, which at the time was the world’s largest maker of potassium dichromate, an oxidizing agent that is extremely harmful to humans. While John White/Baron Overtoun was known as a philanthropist, he was also accused of paying extremely low wages and ignoring the health problems of his workers, many of whom suffered from perforated or ulcerated septums from breathing the chemicals and deep ulcerations of the skin from handling them. The dust was so toxic that the workers were referred to as “White's Dead Men.”

It gets worse. White was also a member of a secret society of alchemists known as Kosmoid, who were allegedly working to make gold from lead and copper from pig-iron.

Is Overtoun Bridge cursed by the evil Baron Overtoun or the local White Lady ghost? Is it mink urine that drives the dogs over the edge or the smell of the potassium dichromate that killed and maimed so many? Does a mysterious ghostly smell only affect dogs with the longest noses? Whatever the cause, Owens believes it will continue.

“You still get a lot of dog walkers up there with their pets not on a leash. It seems many people won’t believe it will happen to their pet until it happens to them.”