There’s a lot of controversy these days about who is being served in cafes and that discourse has now entered the paranormal world. The owner of a café in Texas decided to close it down after a closed-circuit security camera recorded what appeared to be paranormal activity. Is this a ghost expressing an opinion on who should be served at the cafe? Are ghosts allowed to eat there … provided they’re wearing sheets and shoes?

"We are closed today to make sure everyone is safe. I still get chills; my husband won't come in here. It’s weird, it's crazy."

April Ward, owner of the OnLive Walk Of Fame Café in San Antonio, came to work the morning of June 19th to find barricades in front of the café knocked down. They’re used to guard the namesake Walk of Fame which honors famous musicians. This has happened before, but Ward became concerned the following day when they were knocked down again. To see if someone had broken in – even though no alarm had gone off – she and her husband checked the security video. That’s when they saw something that both believed was a ghost.

"You can see the image of a little boy, but then again you can almost see a man."

(Check out the video for yourself here.)

With that, Ward decided to close the café and bring in a paranormal expert (not identified in the mySA interview). According to the article, the expert brought both audio and video recording devices (it doesn't say if they were specifically for ghosts) and recorded a voice saying his name was Peter, he was four years old and he was there with five other ghosts named Don, Tammy, Jesse, Amber, and Stephen. No ages were reported but this sounds like a ghostly day care roster. 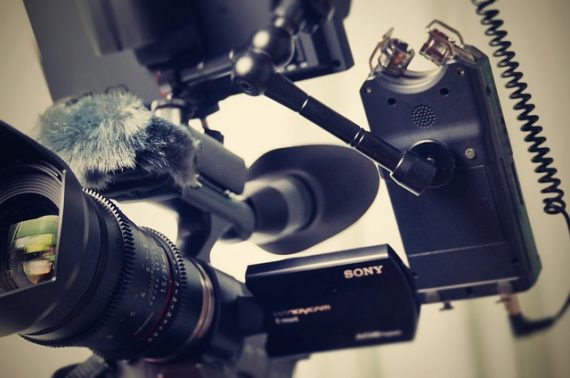 The expert asked Peter to knock down the barriers again, which Ward said she witnessed. The expert then asked the ghost to give them a sign – break or throw something – if he didn’t want them there. Nothing happened. Unfortunately, the expert didn’t reveal the contents of either recording to anyone else.

However, that (plus the lost weekend business) was enough to convince April Ward that it was safe to reopen the café. Not surprisingly, she announced a new menu addition -- $1 Friendly Ghost Floats – and is allowing a few select customers to spend the night with Peter and his friendly friends.

Was this just a clever promotion for the OnLive Walk Of Fame Café? It doesn’t fit with the establishment’s music theme. Is the diner still haunted by the young spirits? The so-called “expert” seems to think so but didn’t give any other details nor an identity. Will the ghosts at the Alamo be upset that these new kids on the boo block are stealing some of their business? That remains to be seen.

In the “Don’t Mess With Texas” state, the bets should be on the ghosts of Davy Crockett, Jim Bowie and William Travis.