While it’s debatable whether it’s the cruelest or most painful form of execution, there’s no doubt that crucifixion is by far the most famous way to die at the hands of the state. While the biblical account goes into great detail with its description, as do other historical accounts of the brutal practices of the Romans, there is no proven physical evidence of that or any other crucifixion using nails to affix the condemned person’s hands or feet to a wooden cross, save for one. Until now.

“We found a particular lesion on the foot of a skeleton from an isolated Roman burial discovered by excavation in 2007 in northern Italy. Here we suggest crucifixion as a possible cause of the lesion, but this interpretation is complicated by the poor preservation of the bone surfaces and the damage and holes in other skeletal parts.”

In a new study published in the journal Archaeological and Anthropological Sciences, researchers from the universities of Ferrara and Florence in Italy discuss their analysis of the remains of a male found in Gavello, a small town in the Province of Rovigo about 60 km (37 miles) southwest of Venice. According to the Times of Israel, the corpse had been placed in the grave on his back “with the upper limbs at his side and the lower limbs outstretched” – a possible sign, along with the lack of any funeral artifacts, that this was an unusual death. The bones indicated the man died between the ages of 30 and 34, but they were too deteriorated for radiocarbon dating. However, nearby brick and tile pieces placed his death at about 2,000 years ago.

Then there’s the foot. Lesions on the right heel prompted researchers to study it with 3D imaging using a hi-tech digital microscope.

“The presence of an ellipsoidal depressed fracture on the medial side, but not on the lateral, suggests that the injury was inflicted peri-mortem and the blow was inflicted from medial to lateral, causing a breakthrough in the impact area (entry point).”

While not conclusive, that sounds like this foot, and probably the other one, were nailed to a cross with a circular nail. This type of nail was not as common as the traditional Roman square nail, which was found, with a piece of olive wood attached, in the heel bone of one of two males found during a 1968 excavation of tombs in a large Second Temple Jewish cemetery in Jerusalem. Once confirmed, that find was hailed as the first solid evidence of crucifixion. (Pictures of the nail-in-bone and the Gavello skeleton here.)

While the Romans pretty much own crucifixion as a form of execution, using it for nearly a thousand years until Constantine the Great abolished it in 337, they didn’t invent it. Crucifixion or impalement was used previously by the Carthaginians, Persians and Macedonians – Alexander the Great of Macedon was said to have crucified 2,000 Phoenicians after defeating their army. Once they learned about it, probably from the Carthaginians, the Romans perfected crucifixion by adding torture and humiliation and lengthening of the process. 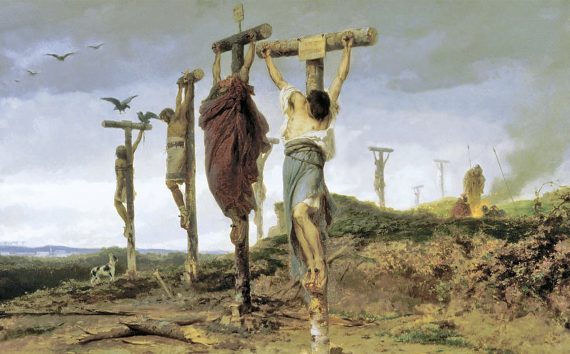 With all of these crucifixions allegedly going on for centuries, why are there only two pieces of physical evidence? Most likely it's because these gruesome executions ended with the desecration of the corpse by leaving it to decompose on the cross or be eaten by scavenger animals. The two skeletons with heels showing signs of crucifixion were buried for some reason, thus preserving them. The skeleton found in Gavello was isolated from the rest in the cemetery, indicating to study co-author Thun Hohenstein that the reason for his crucifixion was known.

“This kind of execution was generally reserved for slaves. The same topographical marginalization of the burial induces us to think that it was an individual considered dangerous and neglected by the society in which he lived that he was rejected by it even after death.”

UFOs and a “highly classified group”