It’s time for another edition of Anomalous Animals – tales of strange creatures found in real places that defy the laws of nature and occasionally kill humans in the process. Today we offer for your education and entertainment a story from Texas, the state that prides itself on threatening anyone who messes with it, about why you shouldn’t mess with the severed head of a rattlesnake either. Then we move to Boston, where a load of lobsters from Canada contained a one-in-30 million live orange lobster. Is that little rubber band really enough to protect you from a severed lobster claw?

“He immediately began having seizures, lost his vision and experienced internal bleeding.”

That could be said of the snake that had its head cut off in Corpus Christi, Texas, last week but it’s also what happened to the man who did the cutting. KIII TV and other local media outlets report that Milo Sutcliffe was working in his yard near Lake Corpus Christi when his wife Jennifer saw a four-foot rattlesnake. Since he knew that rattlesnakes are the leading cause of snakebite injuries in North America and snake-frightened wives are a leading cause of marital problems, Milo did the right thing (unless you're an animal rights activist) by using his shovel to chop the head off of the rattlesnake. Then, being a proud Don’t Mess With Texan, Milo did the wrong thing and reached down to pick up the snake’s head.

"The head actually turned around and grabbed onto his hand. He had to rip it off." 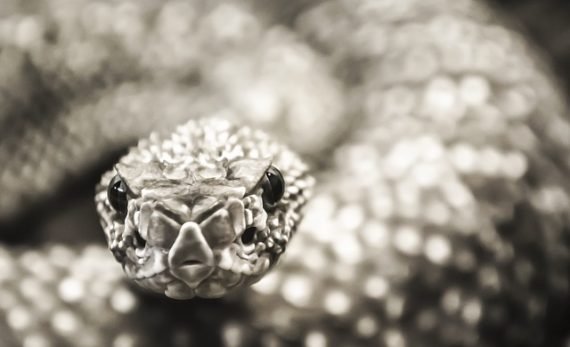 Jennifer Sutcliffe called 911 and began driving Milo to an emergency room. Luckily, when he was hit with seizures and started saying things like “if I die I love you,” emergency workers showed up and called a helicopter to rush him to a hospital in critical condition where he was given a massive amount of anti-venom (26 doses – the usual is 3 or 4) and treated for internal bleeding, extremely low blood pressure, breathing difficulties and more.

"Now he's on dialysis because his kidneys are still not working. They took all the skin off his middle fingers and some from the top of his hand because the skin died."

Why should you not mess with the decapitated heads of rattlesnakes? For one thing, this is not a humane way to get rid of rattlesnakes or reptiles because it doesn’t kill them immediately. Instead, the head dies a slow, agonizing death and is going to punish whatever it thinks put it in that fatal state, which is why Milo’s bite contained every drop of venom the snake had. Believe it or not, the severed head could have lived on for up to an hour. A better approach would be to slowly back away (letting your wife back away first, of course) and let the snake return to its natural habitat. If that happens to be in your garden or under your porch, call a snake expert. If all else fails, crush the head with a heavy object (other than your foot).

On a lighter note – at least for the strange animal – media outlets in Boston report that a supermarket’s fish department found an extremely rare orange lobster in a crate of them caught near Cape Breton Island in Nova Scotia. (Insert your jokes comparing orange lobsters to a certain politician here. Feel better now? Let’s continue.) Lobster experts (carcinologists, not chefs) put the odds of an orange lobster being born and surviving to a 1.6 pound adulthood (it’s 9 years old) at around 1 in 30 million, which are higher than the odds of finding blue lobsters and other abnormal variations.

Fortunately, this orange lobster was in Massachusetts, not Texas, so the sympathetic supermarket took a loss and saved its life. It will either end up in the New England Aquarium or in Japan.

If you find a lobster in your octopus’s garden in the shade, should you chop off that claw which can exert pressure of up to 100 pounds per square inch? While that’s painful, it’s not deadly. Besides, lobsters can regenerate them. The usual method of killing lobsters by boiling them is illegal in Switzerland and some parts of Italy because it’s cruel. The head stays alive when stabbed so the new recommended humane way of preparing them for the pot is with a device that gives the lobster a swift and fatal electric jolt.

Anomalous animals sure do cause a lot of problems.