“Some type of flying objects have been observed”

On May 27 of this year I wrote an article here at Mysterious Universe titled "UFOs: When Governments Come Clean." The article specifically focused on three incredible UFO incidents documented by the U.K.'s military in the 1950s. The point of the article was to demonstrate that, despite what more than a few UFO researches have said, government and military agencies do release official papers that pretty much confirm the existence of the UFO phenomenon. Not everything of a sensational nature is withheld. Today, with the above in mind, I thought: why not demonstrate how this situation applies to not just the U.K., but to the United States, too?

On more than a few occasions, I have heard people say words to the effect of, “Nothing of any significance, on UFOs, has ever surfaced under the terms of the U.S. Freedom of Information Act.” Time and again, I have seen people in Ufology loudly proclaim that all of the “good” material is withheld by the alleged “Black Budget” or “Special Access Programs” that secretly oversee official research into UFOs.

Certainly, there’s no doubt in my mind that important material on the UFO phenomenon most assuredly is withheld from us. But, to maintain that nothing - or hardly anything - of an incredible nature has ever surfaced via FOIA is ridiculous. It’s a statement born, largely, out of overwhelming ignorance. So, I figured it’s time to present you with one, classic example that demonstrates how the Freedom of Information Act has proved to be very useful in securing extremely solid data on UFOs. We're talking about a December 10, 1948 document which originated with the U.S. Air Force and which is titled “Analysis of Flying Objects in the US.”

The USAF document stated that, “A number of reports of unidentified flying objects come from observers who, because of their technical background and experience, do not appear to be influenced by unfounded sensationalism nor inclined to report explainable phenomena as new types of airborne devices.” The Air Force continued that one report which particularly stood out occurred in April 1947. This was two months before Kenneth Arnold’s now-famous sighting of a squadron of unknown aircraft near Mount Rainier, at the Cascade Range. It was a sighting that spawned the term “flying saucer.”

The Air Force noted the following in its “Analysis of Flying Objects in the US” document: “During April 1947, two employees of the Weather Bureau Station at Richmond, Virginia, reported seeing a strange metallic disk on three occasions…One observation was at 15,000 feet when a disk was followed for 15 seconds. The disk appeared metallic, shaped like an ellipse with a flat bottom and a round top…The disk appeared to be moving rather rapidly, although it was impossible to estimate its speed.”

Then, there is the following from the USAF, which describes a notable encounter on June 28, 1947, just four days after Kenneth Arnold’s historic encounter. According to the Air Force, “While flying at 10,000 feet on a course of 300 degrees, 30 miles northwest of Lake Meade, Nevada, an Air Force lieutenant reported seeing five or six while circular objects in close formation and traveling at an estimated speed of 285 miles per hour.”

Less than  twenty-four hours later, the Air Force documentation shows, “…a party of three, two of them scientists, were motoring along Highway 17 toward the White Sands, New Mexico, V-2 firing grounds and reported seeing a large disk or sphere moving horizontally at a high speed and an estimated altitude of 10,000 feet. It was of uniform shape and had no protruding surfaces such as wings. The object was in sight for about 60 seconds before it disappeared to the northeast. The three observers agreed on the details of the sighting except that one thought he had seen vapor trails.”

Then there are the events which occurred on July 7, also referenced in the Air Force documentation: “On 7 July 1947, five Portland, Oregon police officers reported varying numbers of disks flying over different parts of the city. All observations were made within a minute or two of 1305 hours. On the same day, William Rhoads of Phoenix, Arizona allegedly saw a disk circling his locality during sunset and took two photographs. The resulting pictures…show a disk-like object with a round front and a square tail in plan form. These photographs have been examined by experts who state they are true photographic images and do not appear to be imperfection in the emulsion or imperfections in the lens.”

And the reports just kept coming and coming: “On 10 July 1947, Mr. Woodruff, a Pan-American Airways mechanic reported a circular object flying at high velocity, paralleling the earth's surface and leaving a trail which appeared as a ‘burning up’ of the cloud formation. The sighting occurred near Harmon Field, Newfoundland. Two other persons also saw the trail which remained in the sky for about an hour and was photographed by another PAA employee. The resulting photographs support Mr. Woodruff'’s observation as far as the sky cleavage is concerned.”

Moving into 1948, the Air Force noted no shortage of high-quality encounters involving military personnel in that year, too. One such case is written-up in the following fashion: “On 5 April 1948, three trained balloon observers from the Geophysics Laboratory Section, Watson Laboratories, N.J. reported seeing a round, indistinct object in the vicinity of Hollman Air Force Base, New Mexico. It was very high and fast, and appeared to execute violent maneuvers at high speed. The object was under observation for approximately 30 seconds and disappeared suddenly.” 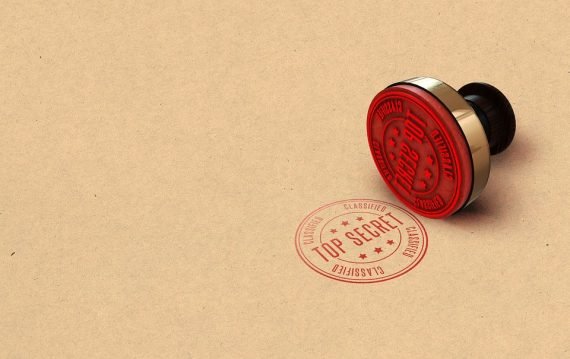 In July 1948, there was an astonishing encounter involving no less than a dozen UFOs, all of significant size: “On 1 July 1948, twelve disks were reported over the Rapid City Air Base by Major Hammer. These disks were oval-shaped, about 100 feet long, flying at a speed estimated to be in excess of 500 mph. Descending from 10,000 feet, these disks made a 30-degree to 40-degree climbing turn accelerating very rapidly until out of sight.”

And the list of remarkable sightings – all of which were recorded in official, Top Secret documentation – continued. As the report shows, various theories were addressed to try and determine who, or what, was flying the UFOs. Theories addressed included domestic programs of the U.S. military and similar projects initiated by the Soviets, specifically in the field of radical aircraft design.

The Air Force’s conclusions: “Since the Air Force is responsible for control of the air in the defense of the U.S., it is imperative that all other agencies cooperate in confirming or denying the possibility that these objects have a domestic origin. Otherwise, if it is firmly indicated that there is no domestic explanation, the objects are a threat and warrant more active efforts of identification and interception...It must be accepted that some type of flying objects have been observed, although their identification and origin are not discernible. In the interest of national defense it would be unwise to overlook the possibility that some of these objects may be of foreign origin.”

In view of all the above, if you find yourself on the receiving end of claims that the FOIA is ineffectual when it comes to UFOs, refer them to the “Analysis of Flying Objects in the US” document.

Over the Ontological Fence: Time Travel and the Bootstrap Paradox