Since its original cinematic release in 1977, Steven Spielberg’s sci-fi masterpiece Close Encounters of the Third Kind has been the subject of fervent speculation in the UFO conspiracy community. Many UFO buffs are convinced that the movie was produced as part of an official acclimation program in anticipation of an alien “disclosure” event. This speculation can be traced back to the production of the movie itself. On 23 July 1976, after a hard day’s shoot, around forty of the cast and crew, including stars Richard Dreyfuss and Melinda Dillon, gathered in the sticky night air of Mobile, Alabama, to hear a lecture delivered by the movie’s appointed advisor on UFOs, Professor J. Allen Hynek (the famed astronomer had been flown in for a brief cameo in the closing scenes). Shortly after Hynek’s lecture, actor Bob Balaban (who plays the character of translator David Laughlin), began to discuss with his colleagues an intriguing rumour that had been circulating during the production—“a rumour,” wrote Balaban in his production diary, “that the film is part of the necessary training that the human race must go through in order to accept an actual landing, and is being secretly sponsored by a government UFO agency.” 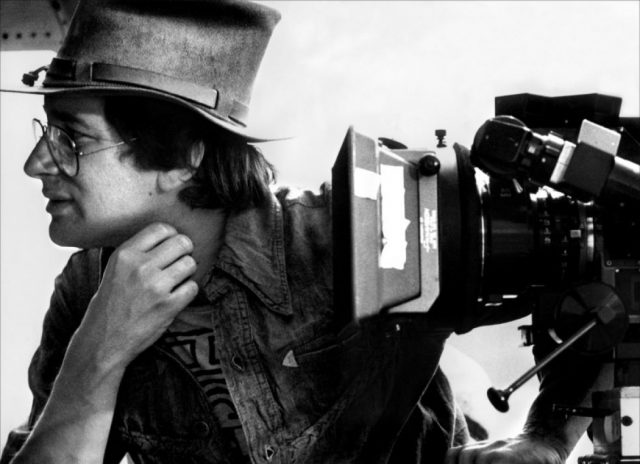 In 2014, I had the opportunity to interview Close Encounters production designer, Joe Alves. I asked him if ever he had heard any such rumours during the shoot, and if there was any substance to them. “There were a lot of rumours,” he told me, ambiguously, before changing the subject.

Back in 1977, even Spielberg himself seemed to be dropping hints: “I wouldn’t put it past this government that a cosmic Watergate has been underway for the last 25 years,” the director remarked during a Close Encounters promotional interview, “eventually they might want to tell us something about what they’ve discovered over the decades.” During the same interview, the director spoke with relish of “rumours” that President Carter was due to make “some unsettling disclosures” about UFOs later that year. Needless to say, no such disclosures were forthcoming.

Particularly curious is that the Carter Presidential Library contains no record of the film-loving President ever having viewed Close Encounters while in office. However, in a 1977 Canadian TV interview conducted directly after the movie’s theatrical release, Spielberg said matter-of-factly that Carter had viewed the movie “Last Saturday.” Spielberg remarked, “We haven’t heard the direct feedback,” but added, “We hear he [Carter] liked it quite a bit.”  The following March, The Phoenix Gazette cited Close Encounters as “Jimmy Carter’s favorite movie,” noting that “The President has seen the movie many times.” This is not the only discrepancy over the official record concerning Carter and Spielberg. Officially, Spielberg never set foot in the Carter White House and had never met the President, and yet a solitary photocopy of a photograph discovered in the Carter Presidential Library proves that the two men did meet. The photo shows Carter and Spielberg engaged in conversation and is signed: “To Steven Spielberg, [from] Jimmy Carter.” An accompanying White House stationary note signed by White House Social Secretary Gretchen Poston and addressed to Spielberg reads: “The President thought you would enjoy receiving the enclosed photograph.” 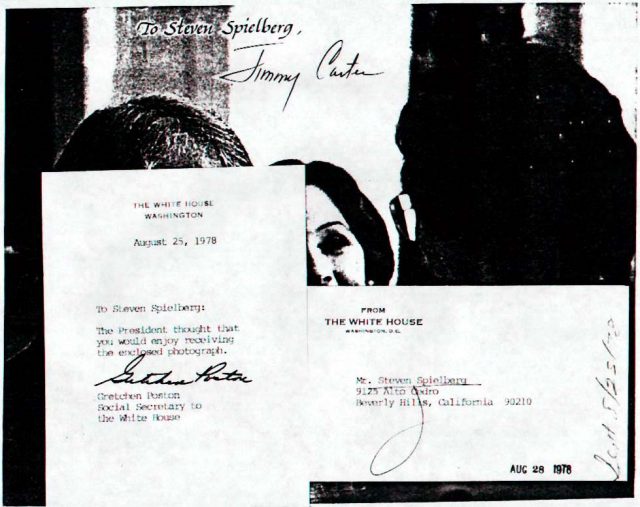 This apparent secrecy almost certainly resulted from a desire among Carter’s staff to keep the Administration from being further publicly associated with flying saucers. Famously, Carter had his own UFO sighting in 1969 in Leary, Georgia, witnessing a bright white round object that approached his position before stopping and then receding into the distance. Carter was with twelve other people at the time, all of whom witnessed the strange phenomenon.  Needless to say, a UFO-spotting President viewing the ultimate UFO movie at the White House and having get-togethers with its alien-obsessed director would have been a PR nightmare.

By far the most outlandish of the conspiracy theories surrounding Close Encounters relates to Project Serpo—an alleged human/alien exchange program between US military personnel and a race of extraterrestrials from the Zeta Reticuli star system. The story goes that, in July of 1965, twelve astronauts were taken to the planet Serpo aboard an alien spaceship and remained there for thirteen years. In exchange, the aliens left one of their own in the custody of the US government. This story didn’t emerge until 2005 in the form of a string of anonymous emails that were sent to selected UFO researchers, including Project Camelot/Avalon’s Bill Ryan, who created a website dedicated to the “leaks.” 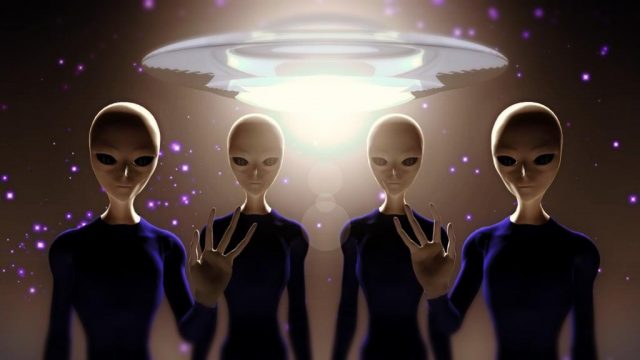 The Serpo story lead some in the conspiracy community to speculate that Close Encounters was partly inspired by the alleged alien-human exchange program of 1965, which assumes that Spielberg himself was privy to inside information on the UFO issue. In the movie’s final scenes, a taller alien (designed by effects expert Carlo Rambaldi) is seen to exit the mothership and communicate with the character of Claude Lacombe via a series of hand gestures. Immediately before this we see twelve scientists clad in jumpsuits preparing to board the mothership and take permanent leave of planet Earth. Roy Neary joins the group as its thirteenth member.

It is important to note that the Serpo story, which has not a shred of evidence to support it, did not emerge until 2005, twenty-eight years after the release of Close Encounters. It’s probably safe to assume then that former inspired the latter, rather than vice versa. 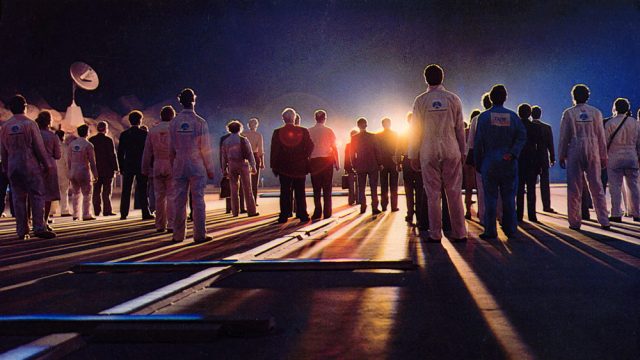 Whether or not there is any truth to the conspiracy theories surrounding Close Encounters, Spielberg’s movie remains hugely significant for the fact that it played a central role in Hollywood’s mid-to-late-1970s economic revival—its $338 million worldwide box-office gross forced crusty studio executives to recognize America’s vast and largely neglected youth market and to adapt their output accordingly. Two other alien-themed movies of the period would also play a key role in this industrial paradigm shift: Star Wars (1977) and Superman (1978). Together, these three films about the wonders of the universe acted as adrenalin, shot straight into the heart of a dying industry (though many critics would argue, perhaps justifiably, that this adrenalin acted as poison in the long-term, stifling creativity and individuality in Hollywood). Spielberg’s film also reignited public curiosity about UFOs as an enduring enigma, and its release closely coincided with the thirtieth anniversary of the Roswell Incident. Just one year later, Jesse Marcel would spill the beans on his first-hand experiences of that event, opening the floodgates for hundreds more closely-corresponding Roswell testimonies.

With Vietnam and Watergate still fresh in the mind, Close Encounters came as a reassuring hug for America towards the end of a decade of disillusionment, and Spielberg’s movie would redefine Hollywood’s working relationship with aliens for much of the 1980s, resulting in movies such as E.T.: The Extraterrestrial, Starman, Batteries Not Included, and The Abyss, to name but a few. Thanks to Close Encounters, what for so many decades had come only to conquer, could now come in peace.