Last December, we learned about the Advanced Aerospace Threat Identification Program or AATIP, a once-secret Pentagon program involved in the study of unexplained aerial phenomena or UFOs. The program came to public awareness after a lengthy article on its funding, secured in part by former Senator Harry Reid of Nevada, who secured assistance in the effort from his friend Robert Bigelow of Bigelow Aerospace.

A lot of additional details have emerged since that time, which include different acronyms for the Pentagon program, as well as the apparent presence of an entirely different parent organization, the Advanced Aerospace Weapons Systems Application Program or AAWSAP (for more on this, see Paul Dean's original posts on his blog here, as well as MJ Banias' article here at MU from last month).

However, our focus here has less to do with the serious matter of government UFO study groups, and more instead with that trusted philosophical idea that "life imitates art." For it was also last year that a new audio drama appeared courtesy of Tor Labs, an imprint of famous science fiction and fantasy publishers Tor Books, which was launched with the express purpose of what it calls "experimental storytelling." 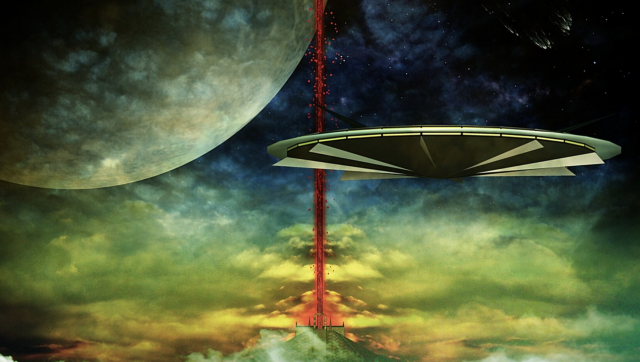 In an era where podcasts and audiobooks have skyrocketed in popularity, it's no wonder that traditional publishers would seek to capitalize on new, and often more accessible forms of media in audio formats, which offer the benefit of hands-free engagement for long car rides, office jobs, and those going about menial tasks around the house on Saturday mornings.

The first project Tor Labs offered was a podcast entitled Steal the Stars, described by The Verge as "a pulpy audio drama about the employees of a secretive government contractor that is studying a crashed UFO." Or, briefly summarized:

This sounds all-too-familiar, and not just in relation to the synchronistic appearance of the AATIP/AAWSAP in public consciousness within just a few months of its launch. The long history of alleged government involvement in the UFO mystery, in addition to questions about the extent to which it occurs, have made UFO government secrecy a lasting trope in science fiction. Popular examples (though they barely need any further mention here) include The X-Files, Dark Skies, and the slightly more obscure 1970 British science fiction television series UFO, to name a few.

As The Verge reports:

Across 14 episodes, Steal the Stars follows Dak (voiced by Ashlie Atkinson), the chief of security for a defense contractor called Quill Marine that in possession of an alien spacecraft buried deep underground. It’s Dak’s job to make sure that the ship and the alien contained within is kept secret, enforcing the company’s stringent security measures. But when she falls for a new hire, Lieutenant Commander Matthew Salem (voiced by Neimah Djourabchi), her life is turned upside down. Interpersonal romances are expressly forbidden, and the two go to great lengths to hide their newfound relationship as their corporate overlords demand more from the research team at the facility.

In an interesting marketing twist, the audio series was produced and presented in three different formats: a serialized version was made available as a weekly podcast, which featured advertisements which allowed monetization of the project, while still delivering the audio drama in a free, downloadable format. However, for those wishing to have an uninterrupted, ad-free listening experience, the program was made available for purchase also as an audiobook. Finally, Tor Books also produced a print novelization of the series as well, for consumers who prefer to absorb their science fiction the traditional way.

The combination of these media elements produces an interesting model, especially in an era here where both competition and cross-pollination between new media formats may yet lead to new means by which people enjoy such content. Pulp novels were all the rage during the 1940s and 50s, although radio format audio dramas were in existence, and saw some success in traditional broadcast venues. However, with the ease of access to listen-on-demand audio content in the Internet Age, the fields are ripe for picking as far as new and innovative creative niches.

"It’s love at first sight," a promotional blurb for the novelization reads at its website, "which is a problem, since they both signed ironclad contracts forbidding fraternization with other military personnel. If they run, they’ll be hunted for what they know. Dak and Matt have only one way to be together: do the impossible. Steal Moss and sell the secret of its existence."

Altogether, the project sounds like tremendous fun, as well as an innovative crossover between audiobooks, podcasting, and traditional pulp novels. Steal the Stars (produced by audio dramatist Mac Rogers) can be found in its original podcast format here, and the commercial-free audiobook is available here. For those who would like to read Nat Cassidy's novelization, it can be found here.