What's worse than having your city battered and broken by a violent storm? Getting smacked in the head by a flying octopus while it's happening, adding insult to injury or, depending on the size of the sky-surfing cephalopod, just more injury. While there are no reports of anyone being hurt by an octopus-turned-missile, a recent storm in the Chinese city of Qingdao bring a mass of octopus, starfish, squid and other sea creatures falling from the sky in the most recent case of bizarre "fish rain."

The storm on Wednesday, June 13 fizzled out before pushing far inland but it did hit the coastal city of Qindao, and the Chinese Meteorological Administration confirmed that the photos of starfish, shrimp, mollusks, and octopus gripped on to cars and homes were, in fact, real. The photos out of Qingdao also included fake images of robots and "monsters" amidst the damage. Aren't flying octopus enough? Do you really need to add robots to the mix?

The likely cause of the "seafood rain" (as it's infuriatingly being referred to on social media) is believed to be waterspouts in the Yellow Sea which presumably sucked the animals out of the water and dropped them on Qingdao.

The phenomenon of "fish rain" or "animal rain" is a rare, but very real, weather phenomenon which has been documented for centuries. Reports of thousands of falling fish, frogs, and other animals that have no business in the sky have occurred since the Roman empire. Pliny The Elder wrote about storms dumping frogs and fish into the streets as early as the first century CE. Since then, fish rain has been seen all over the world.

In the rural town of Yoro, Honduras, residents say that a fish rain happens every year, coinciding with the first major rainfall of May or June and has been occurring for centuries. In 1998, Yoro began a yearly festival to mark the fish rain, called the lluvia de peces, complete with a carnival and parade, much to the chagrin of the fish. 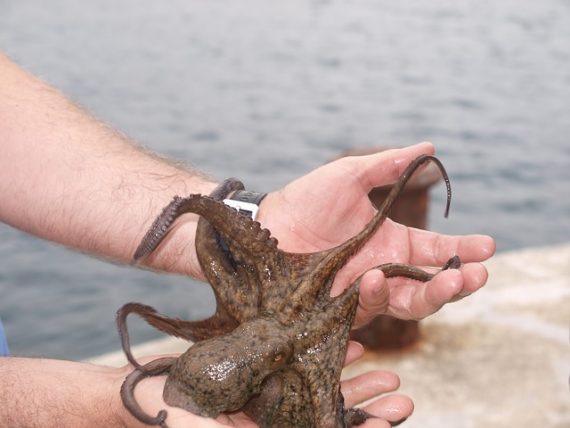 While waterspouts are widely believed to be responsible for the phenomenon, the process of waterspouts sucking animals out of the sea has never been directly observed. This explanation certainly makes sense for Qingdao, China. It's a coastal city, and this fish rain was accompanied by a large and powerful storm system. There's probably a causal effect happening there.

Yet, with the yearly lluvia de peces in Honduras, that explanation doesn't quite hold up. Yoro is not close enough to the ocean for a waterspout to carry a mass of fish all the way to the town every single year. Some believe that when the heavy rains fall, fish migrating through subterranean waterways and caves are drawn up to the surface by the overflowing water and left stranded when the water recedes. If that's true then it's sort of the opposite of a fish ran, come to think about it.

Perhaps there's an alternate explanation. It could be—hear me out—that the scarily intelligent (and possibly alien) octopus is planning an invasion and subsequent takeover of humanity, using fish and frogs as the initial foot soldiers (the vanguard, if you will) before bringing out the big guns. Don't say I didn't warn you when a giant squid lands on your house and starts bossing you around.

I-95 on U.S. East Coast is a Mysterious Solar Storm Magnet